Carlisle manager Steven Pressley spoke to us this afternoon about the transfer of 17-year-old midfielder Josh Galloway to Championship side Leeds United. 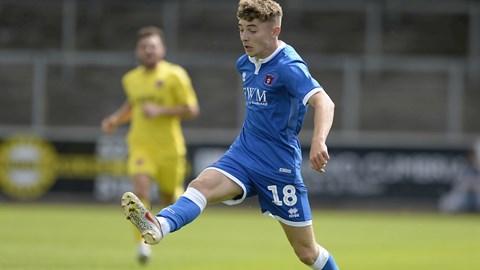 “I’ve said before that the ideal situation is for us to bring through and develop our own players,” he said. “That way we see the benefit from the work we’ve done, and the fans get to see their good young players performing for their club.

“Unfortunately the situation at the moment dictates that young players are being looked at by bigger clubs, and that’s hard for us to accept. It’s the circumstances of the system, to a degree, because I spoke with Josh on two occasions and I told him that I wanted him to stay here and I wanted him to play football here.

“I thought that would be the best line of development for him. Eric Kinder agreed with me and he also spoke with him about what he felt would be his best next move. We both tried to convince him, but it wasn’t to be.”

“The system has created a situation now where you have young players who I don’t think even need to earn a contract, because clubs are in a position where they feel they have to offer them anyway,” he added. “That’s because if they have a couple of good games, and somebody sees that, the club comes under pressure to give them a contract.

“In my day you had to earn the right to get an offer, but these days you’re in danger of losing any young player who stands out for a week or two. That’s down to the system and the way things are, and it’s just incredible.

“We’ve managed to tie down Charters and Branthwaite, because we feel they have earned their offers, and we also offered a deal to Galloway, but that was turned down.”

Expanding more on how difficult it can be to hold onto young talent, he told us: “If any of your young players become a subject of interest, you’re then quickly in a position where you’re negotiating with a club that generally shows a real determination to take that player off you.

“You’re duty bound to get the best deal possible to avoid the danger of losing the player to a minimal amount of money through a tribunal. I just feel that it’s wrong for clubs like us to be exposed to that in this manner.

“I’ve read in recent weeks that FIFA are looking at putting just one fee down for compensation for all young players and, again, I think that’s wrong. The academy staff and the managers at all clubs at our level put a lot of time into developing young players, but a lot of the time you see nothing from it.

“That’s the difficult part of it all. We want to see these kids play in our first team, and after 40 senior games you would then wish him all the best when he moves on, because you’ve had a return from the hard work you’ve put in.”

“Josh has made his decision, and we wish him well, we really do,” he concluded. “He’s a great young man and he’s going to a club that develops young players really well. It’s exciting for him, and you can’t fault a young player for being attracted to a big club. I have no doubt he will do well, because he has all of the attributes.”