United boss Steven Pressley gave us his reaction to the away defeat at Tranmere shortly after full time on Saturday afternoon. 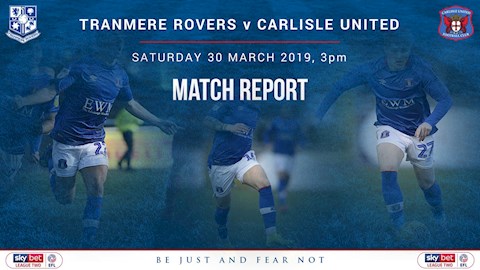 MATCH REPORT: Report from the Saturday afternoon away game

“This is a result that really frustrates me because the players were carrying out the game plan so well,” he said. “We created some good openings and we gave up very few chances through what was a very good opening spell. We passed the ball well and we worked really hard.

“When you’re seeing the players implement the things you’ve worked on during the week you stand on the sidelines feeling really pleased, and you hope the goal is going to come.

“The way we then conceded on the stroke of half time was down to a lack of concentration. We have jobs and responsibilities for set pieces and if just one person doesn’t do it, it comes back to haunt you because you tend to get punished.”

Speaking more about what was a dominant first half, he told us: “I went for the team and formation because Tranmere are a big side, and I knew we had to be able to stand up to that.

“There was a period in the first half when they were getting very frustrated. We were defending really well and we were doing all of the things we’d worked towards. However, as we’ve seen again, the game goes beyond doing things well for periods of time.

“The concentration has to be there throughout the 90 minutes or you do get punished. When the second goal went in, and you’re in a predicament, it takes a little bit of confidence out of you.

“What I will say is that I have absolutely no complaints with the application and desire I’m getting from my players. They’d done what we’d talked about all week so the really disappointing factor was that we lost a goal right on the stroke of half time.

“That was a moment in the game where we needed to show a stronger mentality and it’s an example of where we need to be better with those finer details. It was the same for the third goal, with another set piece, where we just didn’t pay attention to the jobs we needed to do.

“The result makes it look like a convincing win for Tranmere but it was far from it for long periods of the game. We played some really good football at times and that’s why I was so disappointed for us to be behind after 45 minutes. The players had done really well but, at this level, it’s the key moments that cost you.”

BLUES STORE: Spring into April with our adult shirt sale

“Another disappointing aspect is that defending set pieces has been a strength of this team this season,” he continued. “These are the moments where the big players have to get us together, when you’re in added time for the half and you’re in your won box, and reinforce the fact that conceding a goal simply isn’t going to happen.

“We need a stronger mentality in those types of situations and we have to show resilience. I accept that losing a game 3-0 isn’t good enough, but it’s very small details which are costing us.

“As a group of players we have to be pointing at each other and telling each other that things like that aren’t allowed to happen. We have to be tougher and we have to be on top of each other, because it’s the difference between winning and losing at the moment.”

On the use of wing backs, with a return to the starting line-up for Peter Grant, he explained: “We went with that approach because we thought we could get out in those areas, and they are also quite prominent in their attacking of the full backs. It was a very positive system, but we started to lose control a little bit in the second half, and that’s what prompted the substitution of Jamie Devitt.

“We needed to make the midfield area slightly more compact. It was a tactical decision, and I also thought Jamie was tiring a little bit. He’d worked really hard and he’d given it everything, but we needed to close things up a bit more in that area. I have to be brave enough to make the decisions I feel are right at the time.

“I have to give Peter Grant enormous credit because it didn’t look like he was going to train at all last week. He came into my office on Friday morning and he showed a good understanding of the situation we were in. He told me he wanted to try it and, to be fair to him, he got through the game well.

“I have to say that Tom Parkes acquitted himself really well. He did a lot of good things in that position. Danny [Grainger] pulled out late with a hamstring problem from our last training session so that did change things a bit. Hopefully he will only be missing for a week or so.”