“Danny won’t be available for Stevenage, he should return to training next week,” he told us. “Macaulay has returned to training but is also lacking fitness.

“We’d consider Macaulay to be on the bench on Saturday if we were pushed, but he’s nowhere near ready to start in my opinion. He had a few days training then had a knock-back, so he’s had no real run at it.

“He trained yesterday and was fine, but he’s still quite a bit away from what we expect of him. Mark Cullen is the same, but he’s a bit behind in terms of fitness, so it will take him a bit of time. We’re hoping to get him involved in training next week.”

“We also have one or two big players who are doubts for Saturday, but I don’t want to reveal who at this stage,” he continued. “They’re probably 50-50 at this stage, but it is concerning.

“We’ve also got Mike Jones, who is obviously suspended, so we’ve got a number of challenges going into the weekend. That’s why you have a squad, we need players to step up and grasp their opportunity from time to time.”

“You try to avoid injuries as much as you can at this stage of the season,” he explained. “I’ve already been nursing the players through the training weeks, to be honest.

“I’m very much aware that if you go and push them too hard then you’ll get injuries, so it has been a balancing act. I’ve had conversations with a few players, and initially I pushed a little bit harder, but there was a bit of fatigue, so I brought it back in.

“Myself, Dave [Waldie] and the coaching staff are continuously talking about it because we have to be careful. We obviously want to be improving aspects, fitness being one of them, but we also have to make sure we don’t get unnecessary injuries. 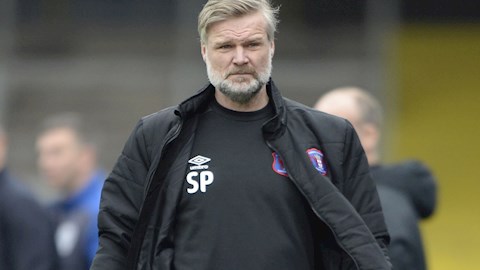 MANAGER: I have to make decisions I feel are right for the club

“Kelvin [Etuhu] missed a couple of games due to the birth of his child a few weeks ago and we saw a rejuvenated Mike Jones, and that is what we require. We need players to come in and be ready to play whenever we call on them.”

“Connor [Simpson] was a great example of that on Saturday,” he said. “We’ve worked with him and he responded by going on the pitch in a determined mood. We live in a football world at the moment where 45 minutes or 10 minutes is good enough and people start to build players up from that.

“Well, no, it’s only good enough once you’ve done it for three, four or five years consistently. We have to guard against what we’ve created these days which makes people superstars overnight.

“The real test is over a longer period of time. Having said that, I’m really happy with how Connor has gone about his work of late because he does have ability and he’s a genuinely nice kid.”

A big area of interest this week was the Tuesday night fixtures which saw Exeter lose to Macclesfield and Swindon hold Newport to a draw at Rodney Parade.

“The results were good for us on Tuesday night,” he agreed. “However, the most important thing is that we concentrate on taking care of the things that we can influence, which is our own performances and results.

“What I will say, and as I said after we lost to Tranmere, I have this feeling that we’re still going to do it. I came in on that Monday after that game and I was full of energy and ready to go, because there was such a belief that we were going to do this.

“I still have that feeling, even though we’re getting faced with some setbacks on injuries and these things, but I just feel that we can get the job done. Of course, we want to do it on our own terms, but when results go right for you, like they did for us last night, you always take it.

“The important thing now is that we make it work to our advantage. We’ll take any opportunity which gives us an edge, but there’s no point in being excited about other results if we don’t do our own bit.”

“What results across the division in recent weeks have shown is that there aren’t going to be any easy games at all between now and the end of the season,” he concluded. “Teams have their own reasons for needing points, and we also have to remember we’re playing in a league where players are playing on yearly contracts.

“If you’re one of those players the fact is that you’re playing for your livelihood, for your family and for huge personal things like that. At this stage of the season players are thinking about their contract for next season, so there are so many things which come together to create that extra edge within every game you play.”