Manager Steven Pressley spoke about the importance of getting this week’s preparations right as the squad builds up towards a massive game against Yeovil Town at the weekend. 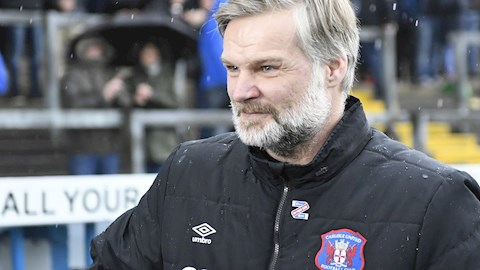 MANAGER: We pressured with great intensity

“I said to you some time ago I thought we’d sneak in and I still think that will happen,” he said. “We need to make sure we take care of our business. There’s nothing we can do if other teams above us win, but what we can’t do is be in a position where results go for us and we don’t take advantage of it.

“That’s not what we want. We’ve done that too many times in recent weeks. It’s one mad day. We’re win-lose in recent weeks and what we need to do is look for a back-to-back positive result for the first time in a while.

“That’s why this week is about recovery and easing ourselves through, as much as anything. I want everybody to be in the right frame of mind because it is really important that we aren’t regretting anything from what has happened on the day come 5pm.

“It’s quite amazing that it’s still any one team from five that can take that final play-off spot. The one week where we needed other teams to do us a favour, it didn’t happen, and that’s why it’s been so frustrating for us recently. We’ve had our opportunities, we’ve missed them, so we can’t complain when other teams don’t slip up.”

Another bright start at Huish Park, as was seen on Saturday against Crawley, would be just the tonic, with wide man Nathan Thomas at the heart of an exciting and pulsating opening 35 minutes.

“There were some outstanding individual performances last Saturday and Nathan was definitely one of those,” he agreed. “We’d targeted the left back area of the pitch and Nathan is such a talent when he’s on his game.

“If he improves his fitness levels he can be what he wants to be. I want him to be producing that every week, not just for 40 minutes, but for the full game. That’s what I feel is required from a player like him.

“If he’s going to be a player that really fulfils his potential he has a lot of hard work ahead, in my opinion, but he has the skills and attributes to be a fantastic player.

“I don’t know what his situation will be at Sheffield United moving forward, but he’s acquitted himself well here. He’s made a good impression on us and he’s a very likeable lad on top of that. He’s slowly but surely improving all the time and he’s certainly one we will bear in mind, should the situation allow.”

With the season almost at a close and with next year’s squad to pull together he commented: “Both David [Holdsworth] and myself are continuously in touch with agents.

“We’re trying to put together a framework of a team and we do have definite targets, there’s no doubt about that. It’s difficult sometimes to secure those targets because some of them want to leave themselves open and wait to see what the rest of the window brings.

“Having said that, we do want to bring in the players we want sooner rather than later.”