United boss John Sheridan spoke to us about the disappointing Tuesday night result against Grimsby shortly after full time at his post-match press conference.

“The last two games have been frustrating because we’re shooting ourselves in the foot,” he said. “This is what League Two football is all about for me. We were really positive before the two home games we’ve just had and, if I’m honest, I was thinking in the back of my mind that we would get at least four points, if not six.

“Even then, I made it clear to the players that they’d both be tough games, which they’ve proved to be. At this moment in time I think the problem is in front of goal. If we’d scored early on Saturday the game would have been totally different, and if we’d taken our chances against Grimsby it would have been another outcome. 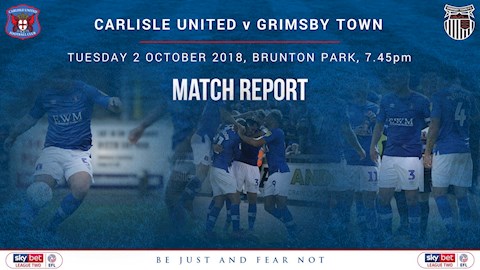 “The fact is we haven’t scored a goal in the last three home games and, when you look back at them, we should be talking about having scored five or six with the good chances we’ve created. I can go on and on about things we should have done, but we haven’t, and we’ve lost another game. That’s what we need to deal with.”

On the performance overall, he told us: “Adam [Collin] probably kept us in the game in the first half, but in the second half we came right out at them and had a go. Sometimes the performance isn’t as bad as the result, if that makes sense.

“I think it possibly could have been 3-2 or 2-2 by half time with the way it went. Both sides had chances and I’ve just been told we had 24 attempts at goal and 62% possession. I’m not a big believer in stats, but when you look at those numbers we should be winning the game. It’s about scoring goals, and we’re finding that difficult at the moment.

“To be fair, I thought we played really well in the second half, but the thing we’re missing most is scoring goals. We’re so untidy in the final third and that’s really frustrating because we get in some great positions.

“We’re creating these chances so we should be scoring goals, it’s as simple as that. We aren’t ruthless enough and I do think we’re untidy when we’re up that end of the pitch. I don’t think it’s a lack of confidence in the final third, I think we pass it around with confidence.

“It’s all about scoring goals and it’s now about who is going to be that clever player who stands in the right place or anticipates the run of the ball. We need to anticipate things better, we had corners and crosses going in but every time a second ball bounced in the box it was a Grimsby player there to clear it, rather than our player trying to put it in the back of the net.

“We absolutely need to find that cutting edge, and if we do that we’ll obviously have a better chance of winning games. I keep saying it but when we create chances, which we do, we’ve got to score goals.

“These are good opportunities we’re talking about, but we’re not scoring them. To win a game you’ve got to score and, if we get the first goal, for some reason we seem to defend a lot better.

“It also means the other team has to open up a little bit, but we haven’t been getting that goal. The lack of goals at home is worrying, I think we’ve only scored five goals at home and five away. That is worrying, because we should be doing a lot better than that with the players we’ve got.” 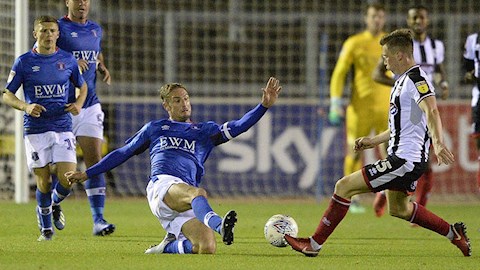 Looking at the dominance shown by the home side after the break, he told us: “I thought we passed the ball really well in the second half and we were brave. We moved it around like we’d asked them to but, once we get into good areas, someone lost control or made the wrong run.

“I think it’s another game we should have won, but we haven’t scored. We’re creating chances, but I think we’re getting beaten by soft goals, and in the games we’ve lost I think we’ve mostly been the better team.

“I’ll always come out and be honest. I think we should have won the game, but we haven’t. At the moment we’re letting a good thing go.

“I know we didn’t get the little bit of luck you sometimes need, we hit the bar and Adam Campbell should score with his shot that the lad has blocked. It wasn’t to be, and it comes down to us needing to score goals and be more ruthless.

And on the goal which proved to be the difference in the game, he commented: “The goal we conceded was very poor on our part, it’s ridiculous how it came about. It comes from a throw in, and instead of people just standing in areas and defending, people are moving around and chasing balls. I’ll have to have another look at it, but it’s a very soft goal, which they all are.

“I’ve been a manager at this level for a long time, and I try not to get in arguments with the players or beat myself up. I try and make it as clear as possible what needs to be done better, and that’s the way I go about things at this stage of my career, because I just know what’s around the corner.”

“We have to give a bit of credit to Grimsby,” he concluded. “I knew they were a good team and I’ve said a number of times that their performances should have seen them pick up more points.

“They’re a good footballing side and they showed that in the first half, because they caused us problems. I told the players, as I did before the Stevenage game, that it doesn’t matter who you’re playing, because everyone is fighting for something in this league. I was pleased with the way we played in the second half, but there’s nothing to show at the end of it, so it’s not really worth going on and on about.”