United face Oldham Athletic in league action for the first time since the 2013/14 season, back when the pair were both firmly ensconced in League One.

The Latics were relegated to League Two at the end of last season, following a disappointing campaign, and have made no secret about the fact that their aim is to bounce back at the first time of asking.

August brought a mixed bag of fortunes in the league, with two wins, two draws, and two defeats, and September followed much the same pattern as they embedded themselves comfortably in the top half of the table. With options up front, they have proved to be a difficult side to play against so far.

The Tuesday night trip to Mansfield was a tense affair as the hosts dominated possession, without finding a way through. The Latics stood tall defensively and could have nicked the lead, and all three points, when Rob Hunt ventured forward in the second half. His shot was just inches past the post.

Keep an eye out for Sam Surridge [pictured above] - he's already notched six goals - and he has Dan Gardner to thank for much of that with the midfielder weighing in with four assists in all competitions. 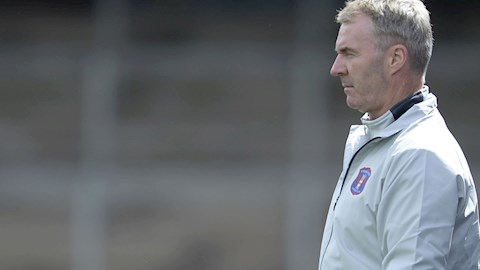 MANAGER: The players have got to be ruthless with each other

Speaking ahead of the game, United boss John Sheridan said: “We're looking to get ourselves going again. We're disappointed that we haven't taken anything from two home games where we've dominated for long periods.

"The difference has been that we haven't been taking the very good chances we've created and we know we have to improve in that area.

"Oldham are a good side who have proved to be very hard to beat. They have players who like to attack and we know we'll have to be on our game. We go there confident because our away form has been good, and we know we can cause problems for any team in this division.

"I'll be looking to us to keep creating the quality of chances we have been creating and, if we can add a ruthless edge, we'll give them plenty to think about."

+ Pine Villa was formed in 1895 but on 4 July 1899 they ceased to exist ... however, there were no tears, because the name was changed and the birth of Oldham Athletic came about.

+ Latics fell on hard times and were forced to go into administration in the summer of 2003, but some much-needed financial stability was provided when three American-based businessmen - Simon Blitz, Simon Corney and Danny Gazal - purchased the club the following November.

These two sides have met on a total of 80 occasions over the years with the Blues shading it for victories, with 33 compared to 27 for the Latics.

The last meeting between the sides was up here at Brunton Park last season, for an FA Cup first round fixture at the beginning of November.

Oldham lad Richie Bennett bagged a brace and, along with a good finish from Hallam Hope, that was enough to see the Blues through to the next round despite second half goals from Peter Clarke and Aaron Holloway.

Watch the GoPro highlights from that game here:

Rewind another year and we were the guests of the Latics for what turned into an unbelievable game in the Checkatrade Trophy group stages. Billy McKay opened the scoring for the hosts, and it all sparked up from there, to say the least.

Michael Raynes, Tom Miller, Reggie Lambe and Charlie Wyke scored for United (complemented by an own goal from Cameron Burgess) and Darius Osei (2) and Oliver Banks added to the net bulging to bring it to a 5-4 conclusion in favour of the Cumbrians.

There was even time for Macaulay Gillesphey to get sent off along the way.

Our official for this fixture is Mr Dean Whitestone. He has taken charge of nine games so far this season and has shown 30 yellow cards and two reds.

It's been 18 months since our paths last crossed, for our play-off semi-final second leg meeting with Exeter City back in May 2017.

It brought to a close a pulsating series of meetings, with Ollie Watkins giving the hosts a two-goal advantage on the night.

Late strikes from Jason Kennedy and John O'Sullivan appeared to have taken the tie to extra time, but former-Blue Jack Stacey broke travelling hearts when he scored a superb winner deep into time added on. Danny Grainger and John O'Sullivan were the names taken on the night.

PREVIEW: A second away trip of the week


United are off down the A1 on their travels once again this weekend.

PREVIEW: A second away trip of the week


United are off down the A1 on their travels once again this weekend.