United manager John Sheridan spoke to us about what was a disappointing result at Lincoln on Saturday as the Blues dropped out of this season’s Emirates FA Cup competition at the second hurdle. 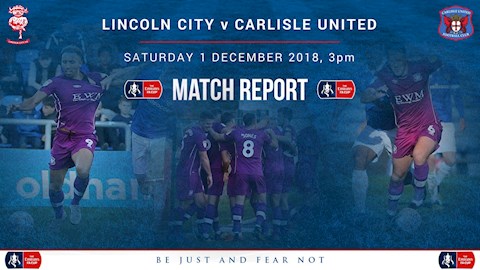 “It really was a shocking start from us,” he said. “We gave ourselves a mountain to climb. You just can’t afford to switch off, whether it’s the first minute or the last. We were so sloppy it was really disappointing.

“We’d given the players the information about what we expected from Lincoln, and how they would come at us, and we reminded them that they had to be ready for it.

“In the first 10 minutes of the game we conceded a goal, and they possibly should have scored two more. There’s nothing you can do as a manager because we’d worked on and talked about everything Lincoln are good at.

“People just switched off, and it’s frustrating because two minutes before we left the dressing room we were talking a good game. The players all knew what they were doing and how they were going to do it, but we then let a goal in from the very first attack.”

“From there you’re chasing it,” he continued. “Credit to the lads, they didn’t fold. They kept going and gradually got into the game. We hit the post, their keeper got man of the match because of the saves he made, and we possibly should have scored three goals ourselves.

“That comes down to what we keep talking about. We haven’t been clinical all season. We shoot but we never hit the target and we don’t work the keeper anywhere near enough. It’s a shame that we didn’t put a couple of them away because I wanted us to be in the hat for the next round.”

Speaking more about the first goal of the game, which came with just 30 seconds on the clock, he commented: “It’s a real downer straight away for everybody, including the supporters who travel to watch us.

“It shouldn’t happen, because there’s enough experience on the pitch to deal with it.

“One of the good things to come out of the game is that we didn’t hide. I always say that we nearly do this, and we nearly do that, but we huffed and puffed and we were always in the game.

“Obviously we got the sucker punch when we were trying to chase it at the end, but we needed to have put some of our chances away before that. It’s no good nearly getting there, we didn’t do what we needed to do at the start, we were sloppy, and it’s cost us the game.”

“If we score one of the good chances we had it’s a completely different game,” he continued. “Again, and I know I’m repeating myself, but we nearly do this, and we nearly do that.

“We compete, and we play some good football, and we do that well. But we then switch off, and that can be the difference. Going behind to a team who can make it ugly and hard for you gives you a big hill to climb, and we needed to stop that from happening.

“As I say, the disappointing part of going behind so early was because of the work we put into the game leading up to it. The players were told that Lincoln were going to come at us and it was something we worked on.

“Unfortunately we fell for it straight from the kick off. It was a game we started with a sloppy approach and we weren’t in it during the first 10 or 15 minutes. We left ourselves with a mountain to climb because of that.

“We started to create some good chances as we got towards half time and we were getting into the game more. We’d caused our own problems though because we’d conceded so early.

“It was another game where we nearly did this and we nearly did that, but we can’t keep saying that. We need to be taking chances to give ourselves more of an opportunity.

“We could talk about who should be closer to who for that first goal, and what happened, but I don’t want to pick people out. Two minutes before we came out of the dressing room to go onto the pitch we were ready, everybody was saying the right things and we were talking a great game. We didn’t do the things we’d talked about when we were out on the pitch in the first 10 minutes and that’s what has cost us the game.”

On the obvious financial implications of being knocked out, he said: “It’s massive for us because there’s no better feeling than being in the hat for the third-round draw.

“You just don’t know what might have happened financially if we’d got through. It’s not to be, it’s gone, so we have to look forward to the games we can affect going on from here.

“Being clinical when we get good opportunities is the other thing which has cost us. The lads aren’t missing on purpose, but we have to be better in the final third. That’s been the same all season so far because we’ve created some fantastic chances, and not taking them has lost us points a few times now.

“I feel for the fans with the way we started this game. It’s hard for them. They come all this way and they see their team go behind in the first minute. We competed for 80 minutes but we were chasing the game at what is a very tough place to come.”

Midfielder Jamie Devitt was the latest player to miss out through injury, having picked up a calf problem in the second half of the Tuesday night fixture at Notts County.

“He felt his calf during the game on Tuesday and he aggravated it a bit in training,” the manager explained. “I don’t think he’ll be out for too long, but we have to wait and see.

“Hopefully Danny Grainger and Tom Parkes will be back in training this week but, again, we need to wait and see. We are short on numbers, but I won’t go on too much about that. We’re just looking forward to getting one or two back.

“We lost Jerry [Yates] as well when he got a bang on the hip. That’s another where you wait to see how it all settles.

“I was never going to bring him on, he’s nowhere near ready, but I wanted him to be involved and around the match day situation again. He sees the specialist this week and he’s getting fitter and fitter as the weeks go by. Hopefully he’ll get good news and he’ll be told to step things up even further.”