The U's come to us this weekend having taken seven points from the last nine following what had been a sticky run through the middle part of November. 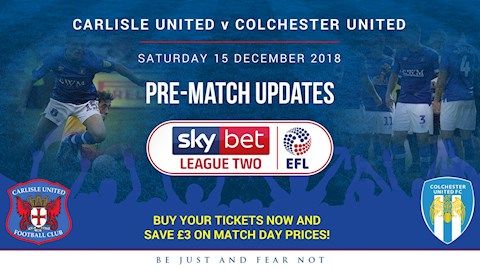 PRE-MATCH UPDATE: Handy information ahead of the weekend game

Recent results have seen them perfect the art of scoring just the one goal, whilst keeping things tight at the back to make sure they come out of the 90 minutes with at least a point.

Currently sitting in third spot, head coach John McGreal has them playing a solid but attack-minded brand of football which has seen them emerge as one of the division's contenders as we reach the halfway stage of the campaign.

A tough run of fixtures sees them play us and MK Dons away over the next fortnight, and they host Stevenage at home on Boxing Day to complete their Christmas list. With plenty of points up for grabs, they'll be looking to at least consolidate their position in the automatic promotion slots.

As for danger men, keep a look out for Sammie Szmodics. His mobility and knack of being in the right place at the right time has earned him eight goals and three assists already this season.

Luke Norris has matched that, and the pair have had able assistance from Harry Pell, Frank Nouble and Courtney Senior who have brought in a haul of ten goals between them.

Speaking ahead of the weekend game, manager John Sheridan said: "Colchester are in a good position in the league, having got themselves onto a run of three games without defeat.

"They have rediscovered their consistency and that shows how important it is to stick to your beliefs and to your method of doing things, even when things aren’t quite going your way.

"They have shown determination to keep going in games which has seen them pick up important victories and, because of that, it has also seen them climb the table.

"We know they're a difficult team to beat, but we think we have the ability and players in our squad to allow us to play the game our way and get a result.

"For us, our aim is to get back to winning ways as quickly as possible. I’ve said this many times before, but I think this squad is good enough to be competing at the top end of the table, and that’s where we want to be."

+ The U’s originally formed because Colchester’s existing team, Colchester Town, were reluctant to turn professional. Colchester United then stepped in as a professional outfit.

+ Colchester were named as the ‘Pride of Anglia’ in 2006/07 when they finished above local rivals Norwich and Ipswich in the Championship.

+ Fans voted for a club ‘Cult Hero’ in 2004, with ex-Newcastle man Lomana Lua Lua coming out on top.

The sides have met on 45 occasions over the years with the U's slightly shading the victories with 19 to United's 16.

The first meetings of these teams last season was for our October visit to Essex. It was a tight game, with both sides creating good chances, but a superb finish from Jamie Devitt proved to be the difference when he got on the end of a long ball forward before calmly slotting it beneath Walker's dive to find the bottom corner.

Back up at Brunton Park in February and Courtney Senior gave the visitors the upper hand with a well taken goal just before the break. The Blues came out for the second half in determined mood and Jamie Devitt pounced once more to claim a point for his side with just 10 minutes left on the clock.

Our referee for this game is Mr Eddie Ilderton. Records show this is Mr Ilderton's first game as the man in the middle this season.

The last time he was at Brunton Park was for our 1-0 win over Forest Green last January. Jamie Devitt scored the only goal of the game and Jack Bonham and Luke Joyce had their names taken on the day.

A bit of club history was made by the referee during that encounter when he booked keeper Morgan Bacon for time wasting on the bench - the ball had rolled under his feet and he delayed a throw in as he kicked it under the seats. Bacon didn't play and, in fact, became the only United player ever to be cautioned never having made an appearance in the senior ranks.

Mr Ilderton was then with us for our 1-0 defeat at the hands of Exeter just over a year ago. Clint Hill and Danny Grainger were shown yellow cards as the Blues pressed for an equaliser, but it just wasn't to be as the Grecians held out.

And we had also seen him earlier in that season when we lost 4-1 at Sincil Bank. Reggie Lambe bagged our consolation and Tom Parkes was given his marching orders with just under an hour left to play.