United and Oldham went head-to-head for the right to progress to the second round of this season's Emirates FA Cup competition at Brunton Park.

And it's Carlisle who head into Monday night's second round draw as ball number 26 - but they were made to work as Oldham twice bit back into what looked to be a comfortable three-goal lead.

A brace from Bennett and a stunner from Hope gave United their cushion but the Latics refused to lie down and they made it a contest you just couldn't take your eyes off with a full-blooded display of attacking intent.

Oldham almost found a way through with just 40 seconds on the clock when Doyle beat the offside trap to cross from wide. Parkes cleared it as Davies challenged, and Grainger helped it on its way before Menig to could make an impact.

The Blues broke and Hope held the ball up well before laying it off for Jones to cross. Bennett slid in to try to get a touch but Gardner did enough to stop the shot.

The Latics came again with Dummigan and Green on the right flank and a delivery from the former was punched away on the dive by Bonham. Menig waited for it to drop out of the sky but he miscued his volley and it spun wide of the upright.

Bennett did well to nod a high cross from Joyce back across the face of goal as the Cumbrians battled hard, but the visitors broke from the clearance and Gardner found himself in plenty of space. He went for a shot from distance but his towering effort ricocheted away to safety as it smashed back off the bar.

Oldham went close again on 19 minutes when Dummigan bent a delivery into the six-yard box. Davies ran across his man to get the touch but Bonham somehow got down to claw it off his line.

And it proved to be an even more important save as United got forward in numbers to win a corner. Grainger sent that one to the back post, for Hill to guide back into the mix, and Richie Bennett did the rest as he made it two goals in two games with an unstoppable close-range header.

Carlisle looked bright and they twice went close to extending their lead as good crosses came in from wide. Jones headed the first one straight at Placide, and Hope hesitated for just a moment too long when Grainger overlapped to cut the ball back into his path.

There were defensive duties for Grainger to complete, as the game swung from end-to-end, and Clarke thought he had the goal at his mercy when Menig found him with a neat lay-off. The shot had power but the captain got enough of a touch to take it over the bar.

The danger wasn't gone though as another very good delivery found Clarke on the move. His downward header beat Bonham but it also shaved the outside of the post.

Growing nerves were settled ahead of the break when a huge free kick from Bonham found Bennett contesting for possession with two defenders on his tail. The loose ball was pounced on by Hope and he left Placide with no chance as he rifled a rasping volley into the top corner.

Bonham saved from Menig at his near post as the Latics threw men forward, and the hosts defended the set pieces with determination as orange shirts flooded the box.

Carlisle showed first after the break when a poor pass allowed Bennett to find Hope. He waited for support from Grainger and his low cross was taken under control by Lambe. Fane stayed close and got a toe on it to prod it away.

Gardner sent a hopeful effort wide following a better spell for the visitors, but it was Carlisle who should have notched again when Bennett put Hope into the box with a slide rule pass. The forward tried to return the favour, when he could have gone for goal himself, and Fane was there again to make a timely tackle.

The Latics weren't about to give things up and Davies had a punt deflected as he tried his luck from long range. But the Cumbrians gave themselves a comfortable cushion on the hour with a lovely move which ripped Oldham apart. Joyce and Lambe tore their way through the back line and the cross from the latter came off Bennett's shoulder before it bounced over the line.

Oldham gave themselves a lifeline when they bit back with a headed goal from Clarke, and it became a real contest when substitute Aaron Holloway stayed alert to sweep a parried save from Bonham into the waiting net.

The Hill and Bennett cobination almost paid off again for the hosts when a header across the box fell to the striker. His nod hit Gerrard and popped into Placide's gloves.

Grainger forced an excellent save out of Placide when he crunched a 35-yarder at the target from a free kick routine, and Bonham was at his very best yet again when another Oldham break left Clarke one-on-one. The keeper spread himself and stopped what looked to be a certain equaliser.

Devitt screwed a shot over the bar deep into time added on, but Carlisle calmed things down and the whistle was welcomed as it blew on a very hard earned victory. 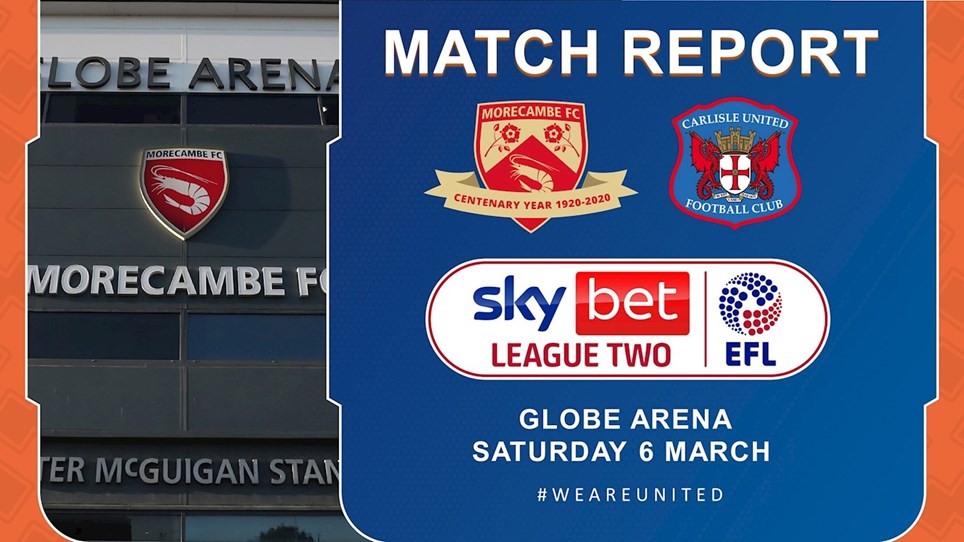 
United made the short hop to Morecambe on Saturday afternoon for their latest League Two fixture.


United had a long trip into Essex on Tuesday night with Colchester United the hosts, with both sides looking for a return to winning ways.


United's gruelling schedule continued with a kick off in the Saturday afternoon sunshine as Oldham made the short trip up north.


United made the short hop to Morecambe on Saturday afternoon for their latest League Two fixture.


United had a long trip into Essex on Tuesday night with Colchester United the hosts, with both sides looking for a return to winning ways.


United's gruelling schedule continued with a kick off in the Saturday afternoon sunshine as Oldham made the short trip up north.