United had to do it the hard way but they put on an excellent performance to earn a place in round two of this season's Carabao Cup.

Manager Keith Curle made three changes to the starting line-up from Saturday with Richie Bennett, Mark Ellis and Shaun Miller receiving their first nods of the season as Nicky Adams, Hallam Hope and Tom Miller took places on the bench.

Liverpool stopper Shamal George was away on an England U19 training camp, so youth product Morgan Bacon came onto the bench, and defender Tom Parkes shrugged off an ankle scare to make his second appearance for the club.

United opened the game by playing some excellent back-to-front football as they moved the ball across the back line and then up the left flank. A challenge by Bolger on Bennett earned the Blues a free kick but Cairns was off his line to make the catch as Grainger delivered.

Fleetwood responded with a slick attack which left Coyle in space on the right wing. His low cross had power but Bonham dropped to the floor to gather it in. Another move down the same avenue of approach had Carlisle stretched and Bonham took a clatter as he again came off his line to claim the ball.

United were up for the game and a one-touch exchange of passes involving Liddle, Joyce and Devitt put Lambe into a good position. He went for a long range shot but it lacked power and was easy for the keeper to save.

It was good stuff from the visitors and they showed patience to create another opening with more fast-paced passing. Devitt was left with time to think and a crisp drive had to be dealt with by Cairns.

The hosts showed as a threat moments later when Cole bundled his way through a tackle. A deep cross was met on the full by Coyle but his first-time volley angled just past the upright.

Carlisle stayed on the front-foot and they deservedly took the lead when another well planned move put Shaun Miller into the box. He dropped a shoulder and went for the shot and Cairns could do nothing as it took a deflection and looped into his net.

Fleetwood had a good spell after the goal but former-Blue Ash Eastham was left disappointed as his header from a corner went right at Bonham. Cole was then thwarted by an excellent sliding challenge from Ellis as he tried to pull the trigger when he raced into the box with the ball at his feet.

The teams tussled for supremacy in the middle areas of the pitch but the home side had a half chance when Cole jumped to meet a high ball. His header dropped over the bar and was watched all the way by Bonham.

United almost unlocked the door again on the stroke of half time as Joyce was played through and into the box. He had to stretch to try to clip it back into the mix and his touch took it over the bar. Fleetwood broke quickly and Bonham produced an excellent save as he went full length to tip a screamer from Hunter over the bar.

Carlisle should have doubled their lead immediately after the break when a flick by Bennett left Shaun Miller in acres of space. He fed it inside for Lambe but Cairns spread himself to somehow make the block as the wide man tried to find the mark.

United had a strong appeal for a penalty turned down on 56 minutes when Devitt skipped into the box with two in his wake. He went down heavily but the referee waved play on.

The Cumbrians dictated the second half pace but they had a scare when Hiwula burst through with just Bonham to beat. The nippy winger checked his run and lost the ball as Jones and Ellis moved across to deal with him.

The same man had another half sight of the target when he received a pull back from the right but his effort hit a leg and was hooked to safety by Ellis.

A double substitution by the hosts brought the red shirts more into the game but Maguire was wasteful as he blazed a 22-yard free kick over the bar.

And the fresh momentum worked when Coyle took a 40-yard pass in his stride. He hooked a cross into the mix and Hiwula made no mistake as he guided his close range volley into the bottom corner.

Striker Hallam Hope went on a charge for United as the Cumbrians tried to reassert themselves but he dragged his toe poke wide as it opened up in front of him. Tom Miller was next to go close when he headed a free kick delivery straight at Cairns.

The game became frantic and Carlisle survived a scare when Bonham spilled a cross when he came under pressure. Hiwula clipped it at the bottom corner but a timely clearance was made off the line.

Devitt produced a great delivery as the clock ticked down but it was just too high for Hope as he changed direction to try to get there.

Fleetwood survived an almighty goalmouth scramble in time added on when the ball pinged around inside the area but the blue shirts couldn't get the decisive touch to finish it off.

A swirling, dipping, fierce shot from McAleny shaved the outside of the post as Fleetwood kicked off extra time in determined mood and a cross from the right skimmed past everybody as three red shirts piled forward.

It was good pressure from the hosts and a thunderbolt from Bolger took a deflection as it bent narrowly wide.

But it was Carlisle who reclaimed the lead when a superb Grainger corner was met on the full by a brave header from Tom Miller. The keeper could only watch as it zipped into the roof of his net.

Strength from Hope helped him to create an opening for himself as the second half of extra time kicked off with United well in the ascendancy. He shrugged off his man and was disappointed to see his goal bound shot stopped by a hanging leg from Eastham.

Cosgrove scuffed a 22-yarder at Cairns as United pushed on at every opportunity, and the front line worked their socks off to keep the Cod Army occupied and to see themselves into Thursday night's second round draw. 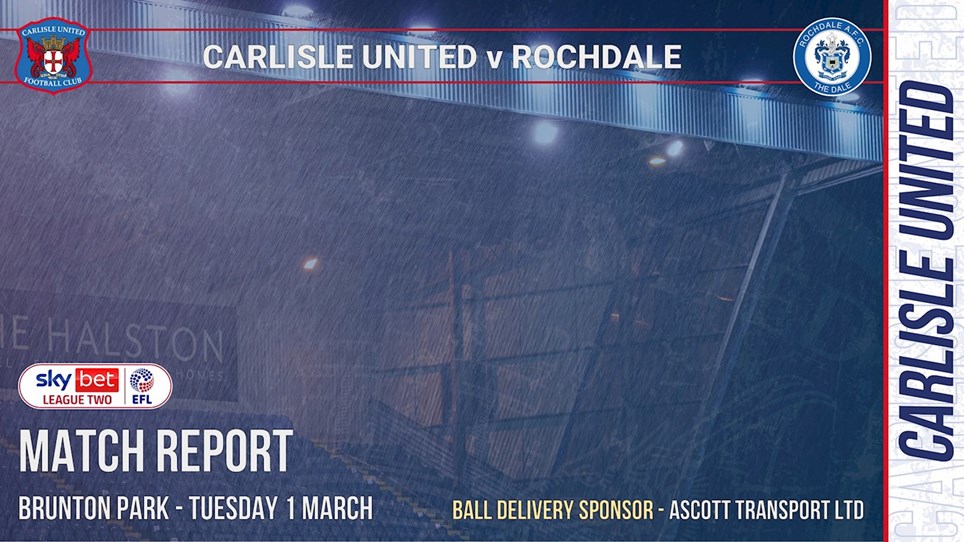 
United and Rochdale finally got to meet for the first time this season with both original fixtures having fallen foul of postponements. 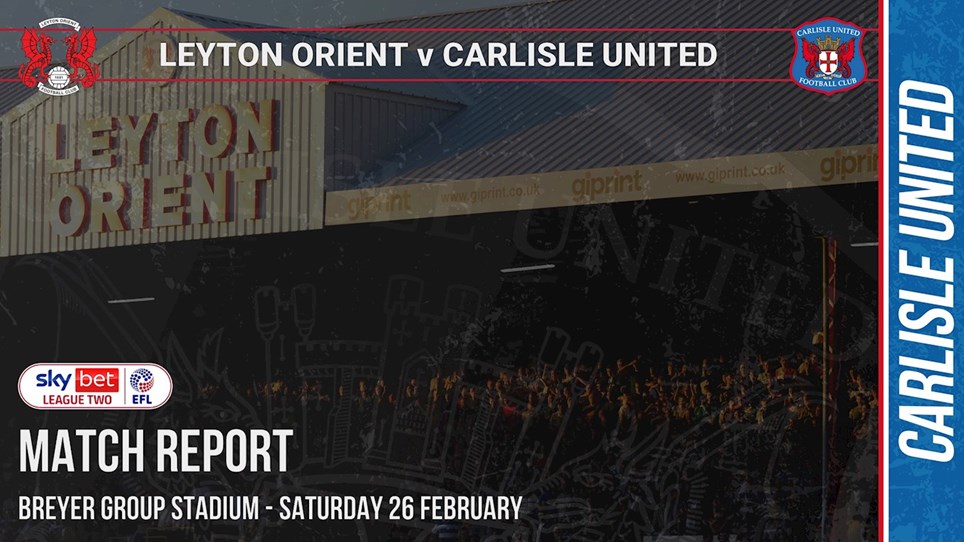 
United were in the East End of London on Saturday afternoon for their trip to face Leyton Orient.

MATCH REPORT: Grimsby A - A United


United were in Cleethorpes on Tuesday looking to protect their three-game unbeaten start to the league season.


United were at home to Swindon Town in the third of their League Two fixtures and it was another day of baking hot sunshine for the players to contend with.


United were at the Montgomery Waters Meadow for their Carabao Cup first-round meeting with Shrewsbury Town on Tuesday night.