Carlisle's impressive unbeaten run - dating back to 30 April - came to an end at the hands of bogey team Newport County as two defensive lapses of concentration left them with too much to do.

Club records have tumbled in recent weeks but this was a day where nothing fell for United despite plenty of energy and effort.

United's set piece threat, so fruitful in recent weeks, was evident as early as the first minute when a long throw was nodded back into the area by Grainger. Ibehre challenged but the keeper was off his line quickly to claim it.

Disaster struck as Newport broke quickly with Barnum-Bobb using pace to burst clear on the right ro receive a kick from Day. His low cross was blocked by Gillesphey but Josh Sheehan was onto the loose ball in a flash. His crunched shot took a deflection and fizzed into the bottom corner.

Carlisle pushed men forward as they went in search of a reply but deliveries from Adams and Tom Miller were intercepted before the visiting strike force could pounce. A long range shot from Gillesphey bent wide when he was given space to have a go and Ibehre was a whisker away when he met a Grainger corner on the volley. He struck it well but it edged just over the bar.

A great touch from Shaun Miller left him with options when Gillesphey clipped a ball over the top, and he side-footed it to Adams which, in turn, allowed him to beat his man. Ibehre screamed for it but Butler slid in before contact could be made.

The dangerous Sheehan went close with a shot from nowhere midway through the half when it sat up nicely for him 28-yards from goal. It was going in until a fingertip touch from Gillespie took it wide of the upright.

That sparked a good spell for the hosts but the blue defence stood strong as they faced an aerial bombardment. But youngster Rhys Healey almost found a way through when he took another punt forward from midfield on his chest. He twisted and turned but his shot from the edge of the area lacked direction as it headed for the advertising hoardings.

Discipline from Newport made it hard for Carlisle to build up a head of steam and the hosts wasted another good chance when Scot Bennett picked a way through to the penalty box. He went for a shot but it was never going to trouble the keeper.

The Cumbrians got forward with plenty in support in time added on for the half as Tom Miller spotted Kennedy on an overlap. A delivery on the run span away from Ibehre and it looked for a fleeting second that Shaun Miller was going to put it away. Joe Day watched the flight and got there before a touch could be made.

Charlie Wyke and Reggie Lambe came on to replace Ibehre and Shaun Miller at the start of the second half and Lambe almost had an immediate say as he pulled wide to take a through pass from Jones. He stepped inside and smashed his effort into the side netting with Day well beaten.

Another good visiting move came to a disappointing end when Gillesphey struck a lay-off from Jones into the sky, and things should have ended better when Lambe found Kennedy with his back to goal on the penalty spot. His lay off brought a shot from Joyce which was too close to Day.

Great work from Lambe and Adams brought another corner for Carlisle as they dictated the pace of the second half but Grainger's shot from the short routine led to a break which the visitors couldn't control. A run from Butler left them two against one and he made it easy for Healey with a deft pass. Gillespie had no chance as it found his bottom corner.

It just wasn't Carlisle's day as another corner pinged around inside the box and such was the level of congestion that Joyce had to try to place his attempt when it eventually squirmed free. Day scrambled but it dipped beyond the angle of post and bar.

Gillespie produced a world class save when Tom Owen-Evans unleashed a thunderbolt from just 19-yards late in the day, and an afternoon of frustration ended with heads in hands when Jones blazed over from a Kennedy set-up in time added on.

Former-Blue Myrie-Williams bent wide from a tight angle as Newport broke again, and that was the last action from a game where the end product didn't quite match the efforts. 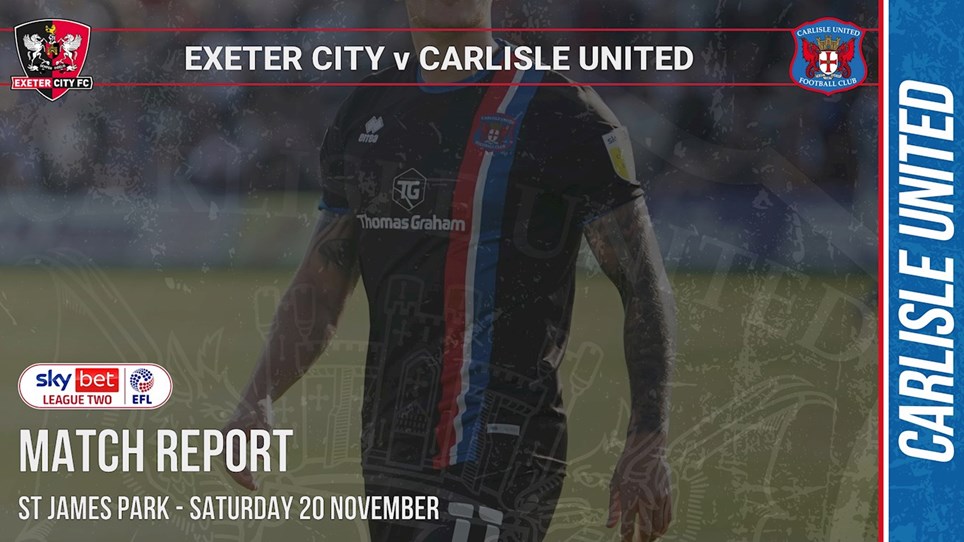