Carlisle kept their play-off dreams alive as they came out on top in a pulsating Easter Monday game at Brunton Park.
Confident Rovers got forward well early in the day when Brown found space inside the box. He spotted Montano on the edge of the area and Gillespie had to drop low to make the save.
A break from back to front followed as Taylor found room to stride forward. He spread it for Bodin and a powerful drive skipped just past the post.
Carlisle responded with a dangerous corner from Gillesphey which found Grainger on the run at the back stick. His nod down was flicked on by Wyke and Raynes went close with a blistering volley which bent just wide.
The home side deservedly took the lead when Reading loanee Jack Stacey was left in acres of space in the middle of the park. He stepped forward, took a touch and left the keeper with no chance as he bent an unstoppable shot into the back of the net via the upright.
It was all about the hosts and they caused problems again when Miller worked a gap with Kennedy. Gilliead took it on and his near perfect through ball preceded a crunching volley as two blocks protected the target.
Set piece specialist Danny Grainger kept the visitors on their toes with a run of excellent corner deliveries and the Carlisle dominance sparked a double substitution with just 22 minutes on the clock as Darrell Clarke looked for solutions to his growing problems.
Striker Charlie Wyke looked up for the challenge and he used strength to hunt down a ball forward from Grainger as it bounced into the box. He got there, but Mildenhall was there to close it down as he raced off his line.
United were pegged back against the run of play on 27 minutes, despite looking to be in control of an awkwardly bouncing ball. Raynes tried to guide a header back to his stopper but Billy Bodin was alert and he ghosted in to clip it into the roof of the net.
A strong run from James Clarke took him through two challenges but Gillesphey did well to block as he looked for the bottom corner. The ricochet fell kindly and Gillespie scampered out to gather.
United worked hard to regain control but they almost gifted Rovers a second of the day when Gillesphey came under pressure. His back pass caught Gillespie on his heels and the keeper was relieved to get enough of a touch to send it past the far post.
The busy Carlisle stopper made an unbelievable save from the resulting corner as he dropped back to guard his far post. McChrystal jumped high to win the header but Gillespie spread himself to tip it over the bar.
And he was in action again moments later when Gaffney was sent free and clear by a through ball from the centre circle. The agile stopper stayed big and made the save with his boot.
United regained the lead with their first attack after the break when Gillesphey floated a free kick at the penalty spot. Raynes flicked it on and the in-form Charlie Wyke did the rest as he took a touch and brushed all aside before he poked it under Mildenhall.
Another testing free kick from Grainger wasn't too far away as a flick off a defender's head took it behind. Miller was there for the corner delivery and Mildenhall scrambled as a header smashed into his side netting.
The action switched to the other end and Easter looked on in frustration when he curled a long shot through bodies. Gillespie was beaten but it rattled the post and bounced away to safety.
And the Pirates should have been back on level terms when Brown got behind the back four on the left hand side. He found Bodin but the target was somehow missed from just three yards out.
But it was a short reprieve as the prolific Matty Taylor found the ball at his feet 19-yards out. He spun and unleashed a snapshot which crept into the bottom corner as the unsighted Mark Gillespie reacted late.
The sides cancelled each other out as they closed the spaces down but the Bristolians almost nicked a lead when Leadbitter delivered an outswinging corner. Parkes got there but his header skipped off the surface and fell wide.
And the miss was punished as Carlisle broke free at the other end. Jason Kennedy kept his cool as he latched onto a lovely Miller pass and Mildenhall could do nothing as the midfielder clipped the points winner into the top corner.
Gillespie had to save from a Lines header in time added on, and he was then magnificent from a deflected Taylor shot, and it was job done and the home crowd were able to celebrate their massive victory.
+++++++
Goals
United - Stacey (11), Wyke (49), Kennedy (85)
Rovers - Bodin (27), Taylor (57)
+++++++
Bookings
United - Miller (74), Ibehre (90), Gillesphey (90)
Rovers - Parkes (51), Lines (72)
+++++++
Teams
Carlisle United - Gillespie, Miller, Raynes, Ellis, Gillesphey, Stacey (Joyce 62), Kennedy, Comley, Grainger (Ibehre 66), Gilliead (Pedro 74), Wyke. Subs - Hanford, Atkinson, Smith, Asamoah.
Bristol Rovers - Mildenhall, Brown, McChrystal, Parkes, O Clarke (Lawrence 22), Taylor, Lines, J Clarke, Montano (Easter 22), Bodin, Gaffney (Leadbitter 82). Subs - Puddy, Broom, Malpas, Fallon.
+++++++
Referee - Mr Darren England
Attendance - 4,718 (651 away fans)


Championship side Cardiff City were at Brunton Park for the first time since October 2000 as they headed north for the Emirates FA Cup third-round replay with the Blues.


It was back to league action for United on Saturday afternoon as they welcomed Plymouth Argyle to Brunton Park for what was the longest trip of the season for the visitors.


The Blues of Cumbria headed into south Wales on Saturday afternoon for a third-round Emirates FA Cup meeting with Championship side Cardiff City. 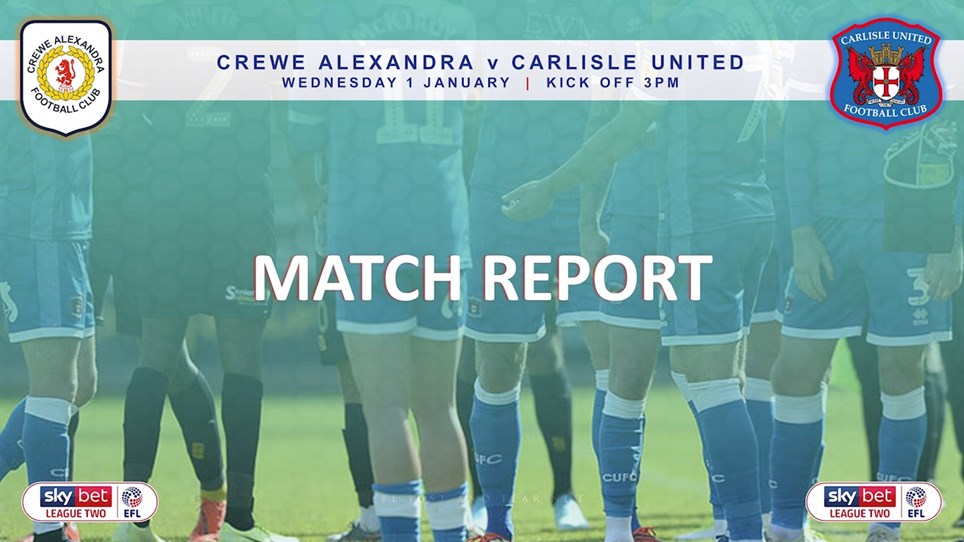 
United went first-footing at Gresty Road as they welcomed in the New Year with an away trip to face high-flying Crewe Alexandra.