United end their season with an away trip to Valley Parade on Saturday.

In what was a busy week of managerial changes at the end of February (ourselves included, of course) former Wales and Manchester City boss Mark Hughes was installed as the new boss at Bradford, citing it an "opportunity for him to develop".

The 58-year-old agree a 30-month deal, ahvign been absent from management since December 2018 when he parted company with Premier League side Southampton.

"It's not a level I'm used to operating at, but I'm intrigued to see how my skillset transfers," he said. "It's a league that's demanding, I understand that.

"Physically it asks questions of players and managers alike. At times it's a bit of a slog, you've got to get through the hard work, that's a given.

As a player he became a hero with Manchester United and has previously managed Blackburn Rovers, Stoke City, Fulham and QPR in the top-flight, as well as managing the Wales national team.

Ahead of kick off, there will be a minute of silence in remembrance of the tragic events of 37 years ago.

They will not be forgotten.

Mid-table Bradford have lost just one of their last five games, with two draws and two victories making up the remainder of that run.

Last Saturday's 4-1 thumping of Sutton was particularly impressive, with them bringing an end to the unbeaten home run for the league newcomers into the bargain.

Just two points separate the teams, so bragging rights are up for grabs for the victor.

Off the bench to provide an assist and a goal last Saturday was that fella we know quite well - Andy Cook.

A powerful forward, he tops the club scoring charts with 12 from 39n appearances.

Another who comes to life around the box, he'll definitely need to be monitored, whether starting or utilised later in the game.

Click HERE to purchase a match pass that will allow you to listen to this fixture.

These teams met in Carlisle in January 2022 and goals from former Bantams Omari Patrick and Jordan Gibson sealed the deal for the hosts.

Watch the highlights from that fixture here:

March 2021 brought the Bantams to Brunton Park as Rhys Bennett (2) and Ozzy Zanzala opened up a three-goal lead. Paudie O'Connor bagged a consolation, but the points stayed in Cumbria.

Rhys Bennett bagged the only goal of the game in December 2020 to earn the Cumbrians a deserved away win.

A game blighted by red cards went the way of the Bantams back in September, as they bagged three in response to Olufela Olomola's early opener, but the match became a difficult one to measure for the Blues following a first-half sending off for Jack Bridge.

We hadn't seen Bradford prior to that since the 1-0 home victory at Brunton Park back in February 2014. Striker Lee Miller scored the only goal of the game - and it was an absolute stunner - and keeping goal for the Blues that night was a certain young man called Jordan Pickford.

A more recent meeting between the teams was the July 2018 pre-season friendly, played at Brunton Park. It was a tight game with the winner coming in time added on when Richie Bennett got on the end of a deflected Hallam Hope shot.

He's taken charge of 36 games so far this season and has shown 113 yellows and three reds.

James was with us for our dramatic 2-1 win over Northampton in March 2022. Tobi Sho-Silva gave us the lead, but the Cobblers scored late through Paul Lewis to burst the bubble - or so it seemed. A cool head from Jordan Gibson saw him smash an injury time penalty into the back of the net. Joe Riley was the only United name taken on the day.

He was at Brunton Park in November 2021 for the 1-1 Papa John's draw with Lincoln. Jack Armer scored the goal, and the Blues won on penalties to claim the bonus point. Callum Guy and Jon Mellish were booked for the hosts.

Papa John's Trophy group action brought Mr Bell north again in August 2021 for a goal-filled 3-3 encounter with Hartlepool. Taylor Charters, Manny Mampala and Tristan Abrahams scored the goals, and the Blues eventually won the shoot-out 4-3. Mampala was our only booking of the night.

If you have purchased tickets for collection collect, please try to collect these from Brunton Park before 4pm on Friday.

*Family Junior tickets – two adults and two juniors for £45, this deal is not available on the day of the game.

Ambulant disabled and wheelchair users pay the relevant price with the carer free of charge. Disabled fans must be in receipt of a DLA or PIP at the higher or middle rate of mobility. 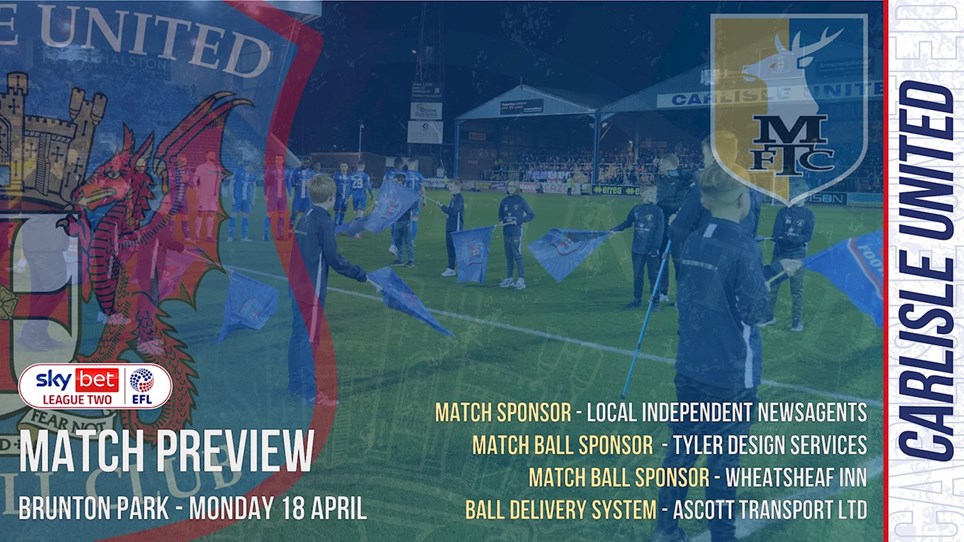