The vast majority of United’s 1,700 strong travelling army stayed behind after the full-time whistle blew on Saturday afternoon to clap the team off and to say one last farewell to a season that had been troubled, to say the least. 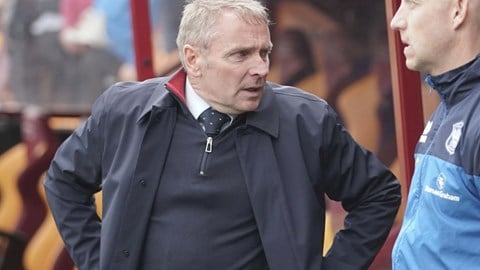 MANAGER: You have to be committed in every game

“We have to make sure we get a group of players together this summer who can start the season well, because I think the fans have shown what we can create if we do things properly,” gaffer Paul Simpson said.

“The truth is that having strong support from fans and businesses is the only way this club is going to prosper and move forward.

“People can complain about the ownership group, but my understanding is there isn’t anybody else coming in waving a cheque to take it on. This is what we are.

“The group of directors running it, the three directors and the fans trust, they don’t have a blank chequebook they can throw at it. “e need the fans to come in, we need support.

“I’m led to believe there’s been a magnificent support on season tickets. The fans have been absolutely superb.

“I think we’re getting some sponsorship next season, different shirt sponsors, shorts sponsorship, back of shirts and everything else. We need everybody to come and help.

“I did a business breakfast meeting last week and we’ve got so many people who are enthusiastic about Carlisle United in our area.

“I think if you can have a successful Carlisle United it will make the community, the city, the pubs, the bars and restaurants, everybody can have a positive feel.

“We need them, it’s a bit of a chicken and egg one, because they’re probably thinking we’ll come back when you do well, but we need them to come back to help us do well. 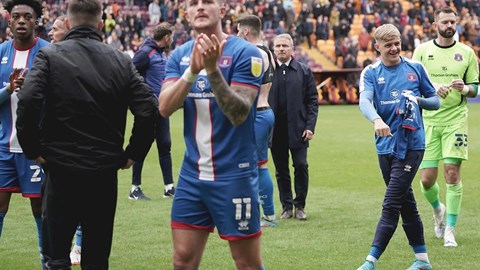 “The supporters have been magnificent, we’ve had really good backing. Let’s give us a hand, give us a fighting chance to be successful.

“We haven’t got a fairy godmother on the board who can just wave a cheque. We have to generate as much as we can.

“There’s a real positive feel about the place. Let’s keep it going, the only way to do that is support us, as we try to get a group of players who have passion and desire to do things properly, and hopefully it will take us forward.”

“The challenge now is to get the right players in for that,” he added. “We’ve got the difficult conversations to have on Monday and we’ll try and make as many right decisions as we can.

“Some of what we do will surprise people, I really don’t care. I want to do the job I think will help us get stronger next season. That’s all that matters now.

“Whatever has gone before is gone, and now it’s a start of trying to build something. We aren’t trying to do it overnight, but we want a good start to the season and hopefully we can then keep getting stronger through the years to come.”

Supporters from both clubs came together to remember the 56, but that moment of respect was blighted by what appeared to be a disturbance in the away end, with some claims suggesting it came from a person in the concourse who wasn’t aware of what was going on.

Others claim that the individual was in the seated area, and was confronted about his actions.

“People were rightly angered,” the manager said. “It’s really sad, but we had 1,700 here and we’ve got one supporter out of that who makes a noise.

“Unfortunately they all get tarnished with that brush. The others absolutely respected the minute’s silence, I actually just hope that that lad who shouted didn’t know what was going on and walked in late and didn’t realise it.

“I’m just trying to make an excuse for him, I don’t know. But rightly he got booed for it and I think even our fans were telling him to shut up.