Carlisle United Football Club are delighted to announce that Brennan Dickenson has agreed a new deal which keeps him at the club until the summer of 2023. 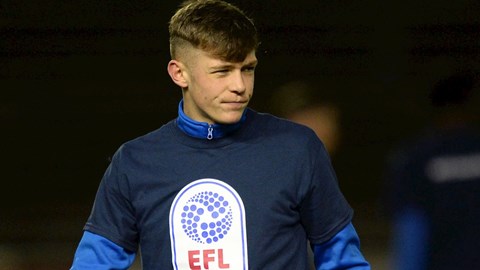 Dickenson, 29, joined the Blues on a two-year deal in August 2020 and has scored three goals in 55 appearances so far.

He was one of four players offered new terms at the end of the last campaign, having made 43 outings, featuring heavily under new boss Paul Simpson.

“I'm absolutely delighted that Brennan's agreed to stay,” the manager said. "I think there is so much more to come from him and I'm looking forward to getting him back in for pre-season.

"When you're in a situation like we're in you need players who tick a couple of boxes, and he gives us a bit of versatility.

"I'm obviously biased but being left-footed I don't think you can have too many players with that attribute in your group.

"Without any doubt this is a great opportunity for him to kick on. He's got athleticism, power and very good ability. I really do think there is more to come from him and I'm looking forward to working with him."

Dickenson was in the youth system with Southampton before he joined Dorchester, where five goals in just over 20 appearances caught the eye of Brighton, then in the Championship, who secured his services for an undisclosed fee.

He had valuable loan spells with Chesterfield, Wimbledon and Northampton whilst with the Seagulls, and he was on the move again in the summer of 2014 when Gillingham snapped him up, again for an undisclosed fee.

A total of 78 appearances for the Gills preceded a move to Colchester, where he would go on to be named in the 2016 EFL Team of the Year, having established himself as a left wing back with the U’s. He bagged 15 goals in just over 90 appearances with the Essex club, but he chose to turn down a new contract offer in favour of a move to MK Dons.

A call from Exeter in January 2020 saw him join the Grecians for their play-off push, where he scored twice in 13 appearances.