Taken from the book - One Hit Wonder - by Roger Lytollis (warning, contains some strong language):

We were well into added time when Scott Dobie hit a cross from the right. It came off a Plymouth defender and went out for a corner.

I looked across at the manager, Nigel Pearson. At other times when I’ve wanted to run up the field, people have told me to go back. No faith in football to come up with a wonder moment.

But now I thought, “Sod it.” What was there to lose? Nigel shrugged his shoulders and waved me up. I began my 100-yard dash up the pitch, hoping to arrive in the penalty area before Graham Anthony took the corner.

The final whistle sounded at the McCain Stadium in Scarborough. Thousands of home fans poured on to the pitch and sang along as All Right Now blared out from the speakers. Scarborough v Peterborough had finished 1-1. So, they thought, had Carlisle v Plymouth.

In the home dressing room the champagne was on ice. There was no such caution in the boardroom. Scar­borough’s directors were about to uncork a bottle of bubbly.

The chairman’s wife watched the fans dancing on the pitch. Then she saw the dancing stop. A friend of the chairman was getting commentary from the Carlisle game on his mobile. He dropped the phone.

I arrived in Plymouth’s penalty area as Graham Anthony’s corner floated over from the right. No one mar­ked me because no one saw me coming. I ran to­wards the ball, realised I wouldn’t get the header and kept going for the six-yard box.

Scott Dobie thumped in a near-post header. The goalkeeper parried it. The ball dropped at my feet. I steadied myself and lashed out with my right foot. The ball flew hard and low into the net.

There was a split second of stunned silence, then an enormous roar. I raised my arm and turned in celebration. Before I could run, my team-mates threw themselves at me and dragged me to the ground.

Thou­sands of fans poured onto the pitch. I was entwined with David Brightwell under a pile of players. “Brights – I think I’ve just scored the winner!” “Yeah,” he said, “but we’re getting fucking squashed!”

Fans were hurl­ing themselves onto the mountain of bodies. Brights grabbed my head. We couldn’t breathe. We were scream­ing: “Get off! GET OFF!”

After what felt like forever, they did. I staggered to my feet. Hundreds of people were lunging at me, hug­ging and kissing me. Fans were swinging on the crossbar. I was shouting: “Get off the pitch! The game isn’t over!”

I thought Plymouth would break and I’d have to save it. I was shaking to my bones with adrenalin. I ran back down the pitch as people mauled me. My nose was pissing blood. I must have been kneed in the face while I was on the ground. My gloves were covered in blood.

I looked for my towel in the goal. Someone had nicked it. I composed myself and steadied my breathing: OK, everyone’s off the pitch, calm down, concentrate on the game...

Plymouth kicked off. The referee blew the final whistle. My goal had come with one second to spare. I ran for the tunnel with my arms outstretched, screaming in elation. A sea of bodies hit me from all sides.

They hoisted me up and carried me across the pitch. People were ripping at my gloves and shorts. Some were panicking and shouting: “Let him through!” At the edge of the pitch they let me down and I groped my way through the crowd.

At the mouth of the tunnel, another surge of adrenalin hit me. I let out a war cry, screaming: “Come on! COME ON!” I ran up the tunnel into a mass of television crews. The words tumbled out.

“I just kept my head down and hit it. I thought I was gonna balloon it over the bar to be honest with you but I couldn’t miss from that distance. If Schmeichel can do it I can do it! I don’t know, you just try your luck. Never pick up the goalie, do they?

In the dressing room I was mobbed. Everyone was hugging everyone else. Someone tipped a bucket of orange juice over me. Nigel Pearson had his shirt off. He embraced a couple of people then he turned around and gave me the biggest hug. He was crying.

A journalist gave me his mobile phone and the television crews filmed as I rang home. “Hello, mum. I’ve just scored the winner.” “Yes, darling, we know.”

We were bundled out along the corridor and up the steps to the directors’ box. Everyone pushed me to the front. Thousands of fans had gathered on the pitch. Someone said: “Throw your shirt in!”

I ripped it off and threw it into the crowd where it disappeared in a mad scramble. Nigel Pearson made a speech. He thanked the players, the directors and the fans for their support. He didn’t mention the chairman.

We trooped downstairs. I was knackered. The adren­alin had drained me. I sat in the shower room, alone with my thoughts, until the television crews re­turned. Michael Knighton, the Fat Controller, was with them. I’d hardly seen him before.

He planted a kiss on my forehead. He stank of cigar smoke. “If that’s not entertainment,” he said, “I’m a banana.” He was all over me, then he got up and followed the cameras. There was no escape from the noise so I went down the corridor into the physio’s room.

A couple of players were there trying to get away from the pandemonium. I sat on a bed for a while until it had died down. Everyone started to realise what a close shave it had been.

Back in the dressing room someone said the news­paper journalists wanted to speak to me. They took me to the press box at the top of the stand where about 30 reporters were waiting. The big guns from the national papers had come to Brunton Park expecting a wake.

They had been given something else, something none of them could have invented. “Will you be back here next season, Jimmy?” “Well, you never know what’s going to happen.”

In the directors’ suite I was presented with the man-of-the-match award. Champagne corks were popping. Hands grabbed me everywhere I turned. By the time I returned to the dressing room, it was empty. Most of the lads had got changed and disappeared.

There were a couple still hanging around and I asked them what was happening. Everyone was going to Leonardo’s res­taurant later that evening. No one actually stayed and told me. I could have driven back home and nobody would have known.

I was getting showered and changed when a group of men walked in. They were about to play on the pitch in an end-of-season sponsors’ match. They weren’t Carlisle fans and they weren’t paying me the slightest bit of attention. There was no one else about. The corridors were deserted.

I put my tracksuit on and walked outside. I was suddenly me again. What do I do now?

I drove back to the hotel then got a taxi to Leonardo’s. The players were with their families. It was hard for everyone to take in what had happened. I didn’t really feel involved.

I’d been there only 12 days in total and my loan had just ended. I was no longer a Carlisle player. Martin Wilkinson, the chief scout, pulled me aside. “We want you to come back next year,” he said. “We’re really impressed with you. The chairman wants to have a chat.” “OK, we’ll talk about it.”

We had a drink in the bar upstairs. My chat with the chairman would have to wait, because Michael Knight­on wasn’t there. His status as the most hated man in Cumbria meant he didn’t get out much. Even after my goal, several thousand people would have happily strung him up.

Everyone was slowly getting pissed. A couple of cigars were on the go. We went to Buskers night­club next door. As soon as I walked in the place erupted. Everybody wanted to buy me a drink. Strange men were trying to kiss me. I felt very uncomfortable.

At one o’clock exhaustion hit me. I’d expected a storm­ing night but I was dead on my feet. I slipped out by the back door, got a taxi to the hotel and went straight to bed. 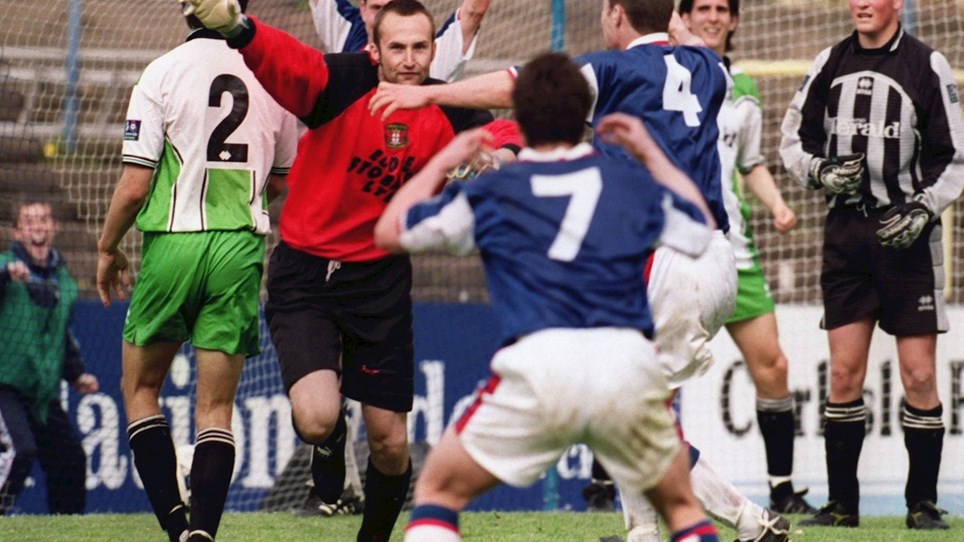 
It was a moment that wrote itself into football folklore. 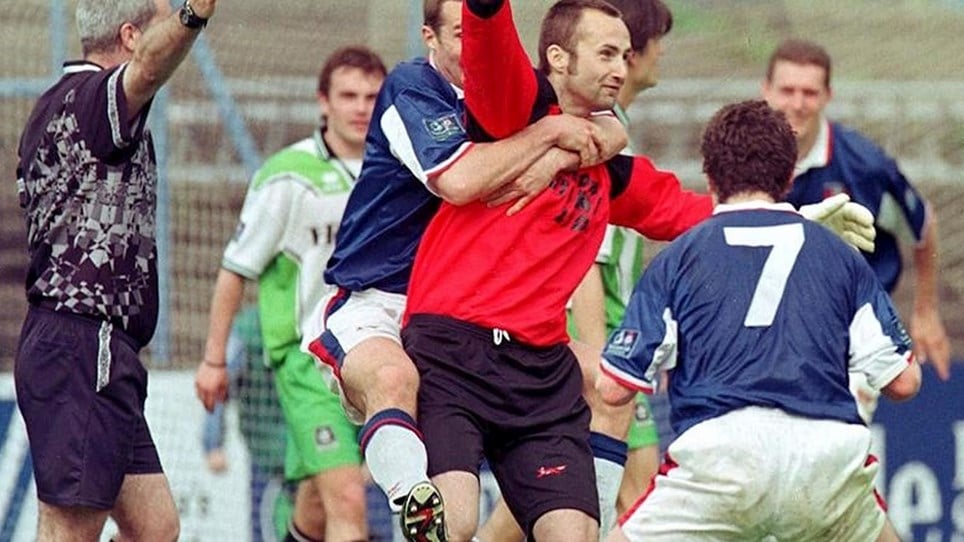 
Put on your big slipper, kick back and relax as you relive an unbelievable day: