You might be forgiven for thinking there’s a bit of a curse on the captain’s armband with what’s gone on in recent weeks, with Callum Guy having picked up a nasty injury at Barrow last week and Corey Whelan limping off during the second half against Bristol Rovers yesterday. 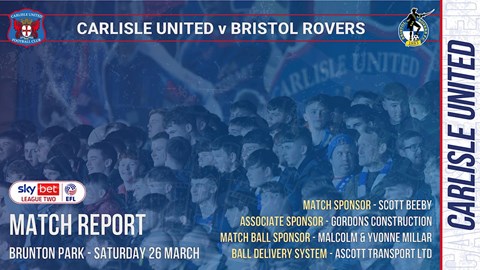 Then, new dad Jon Mellish, who had taken the honour when Whelan departed, was also substituted when cramp took a hold ... but the curse was well and truly broken when Morgan Feeney – the third skipper of the afternoon – cleared one off the line late in the day to help to secure the points.

“Corey’s fine, I think he was just shattered,” manager Paul Simpson explained. “Jon took it off him and he was shattered as well.

“I said the other day, I don’t care who’s got the captain’s armband. I know some people look at it as if it’s a really big thing, but it’s about having a team of leaders.

“Anybody can have it so long as we’ve got leaders. Morgs is leading, Dynel’s leading, Mark Howard’s leading, even Denno, the way he’s working and getting about the pitch.

“They obviously didn’t show it earlier on in the season for previous managers but thankfully for me they are and it’s brilliant to see.”

“When Corey first went down I think we were all worried,” he conceded. “He just ran himself into the ground. You can train really well, his attitude in training has been excellent from the first day I came in.

“He’s playing in a different position, and his body’s not used to that sort of workrate. But there’s a big difference between training and matches. That match tempo. You’ve got to get used to it. 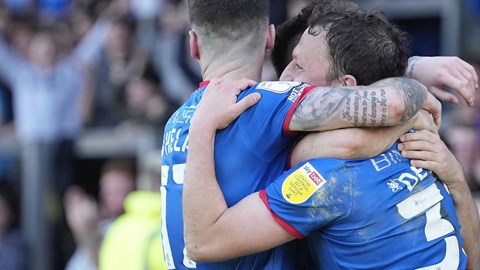 “He’ll benefit from that and I hope he's going to be ok for Tuesday night. To the best of my knowledge there’s no injury involved, it was just that he was absolutely shattered.

“And credit to him for admitting that, because I’ve said to them all, I want you to run yourself into the ground, and if we have to come and stretcher you off, fine, we’ve got subs who are willing to go on and do the same.

“We’ve had Kelvin come on, it was great to see him back and getting some minutes. Rod was back out there, and it’s a nice feeling as a manager when you look at that bench and you have people like Tobi who’s had a massive effect coming off the bench, he doesn’t get a look-in today, Lewi Alessandra’s been excellent in training, and Tyrese took his goal well the other night.

“It’s really good to have those options and be able to have to go and change it. The two subs we had to make with Kelvin and Rod coming on were about getting a bit of experience on there to help us defend as they threw everyone forward, and I felt we needed that.

“I think I spoke the other day about the way Kelvin stepped back into training, and I’ve no idea how long he’s been out for but it’s like he’s never been away. He’s done really well, and I was pleased I was able to get him on.

“When you look at the bench and you see experience on there, it doesn’t half make you feel good as a manager. It’s unfortunate for Joe that he was also getting cramp so he might need to have a look at what he’s eating and drinking before a game, but we have to challenge ourselves.

“Everybody has to make sure they’re right, because we have good players on the bench and even amongst those who haven’t made it who want to be out there.

“The ones who have the shirts right now have got a challenge on to make sure they stay in the team, but that’s what we want. We want everybody pushing each other to be as good as we possibly can be.”

With baby Oakley having arrived just a few days ago, it was perhaps a surprise to see Jon Mellish at the club, let alone out on the pitch.

“Everything about what he did in the game was excellent,” the manager commented. “I wasn’t expecting him in on Thursday but he texted me late on Wednesday night to say, is it 10am tomorrow, I’m coming in.

“I said yeah, if everything’s ok, come in. He’s had a week he’ll remember for life. Football’s probably only a really small part of this week for him, but he’s finished it off really well.”

Following such a bruising encounter another tough fixture on Tuesday night is possibly not the best next step for the week ahead.

“Yeah, possibly we could have done without it, but it’s there so we’ve just to get on with it and do the best we can,” he said. “The players will be fine, and I’m sure they’ll all be complaining about being tired on Sunday, but when you’re winning games you suddenly get a spring in your step.

“I imagine they’ll all soon be raring to go and looking forward to it. We’ll see what state they’re in on Monday when we come back in together, we’ve just got to get them freshened up.

“I’ve asked them to be really, really professional, this weekend, and go and have some time with the family, make sure they do their recovery properly.

“I don’t believe in getting players in on a Sunday, that for me is a day where you spend time with your family.

“Hopefully they’ll do that, we’ll come back in on Monday, check them, see what their fitness levels and tiredness levels are like, and hopefully pick a team to win for us  on Tuesday night.”