United boss Paul Simpson has enjoyed the luxury of a full week of training ahead of the Northampton game this weekend, with an opportunity to get the whole squad moving with another busy period coming up. “It’s been really good,” he said. “I think it’s always a difficulty when you’ve got so many games to actually get time on the training pitch.

“This has been a good week because we didn’t have a midweek game, but I also enjoyed last week when we did have a game, because we won it.

“It’s good to be able to get the players out there and there’s a real good feeling about the group and a positive atmosphere around the place.

“Everybody is in a happy place and we’ve just got to keep them there as long as we can.”

And with everybody firing on all cylinders, it’s providing food for thought when it comes to team selection.

“We’re at that stage of the season where I don’t think it’s about rotation, it’s about putting out the best team to go and get a result,” he commented. “When we’re winning it’s easy to pick a team, the hardest thing has been leaving somebody off the bench, because we’ve got that competition.

“I always think a sign of your group is a strong bench, and it could get stronger over the coming weeks. 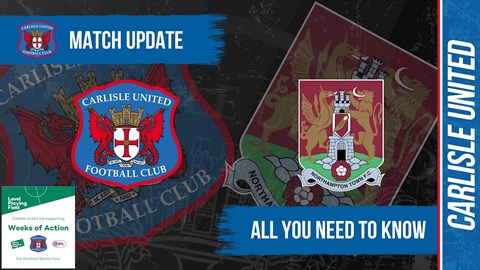 “We’ve got Rod McDonald and Brennan Dickenson back, and hopefully Gime Toure and Kelvin Mellor will be back over the next few weeks as well.

“They’re all getting closer. I’ve got a decision to make as to whether it’s too early for Brennan and Rod to be on the bench for this weekend, but they’re definitely coming into my thinking.

“They’ve trained this week with us, they trained at the end of last week, they both look in a good place. They’re certainly not right to start the game but it’s whether they come into the 18, just to get them back into it, which would be really harsh on somebody else that might miss out.

“But we’ve got no time for being sentimental with people at the moment. It's about putting the strongest 18 out to try and affect the game. So I’ve got a decision to make over the next few days on those two.

“I think the earliest we might see Gime is the Cumberland Cup game, but he needs to do a week or ten days of training with the rest of the group to make sure he’s ready for that.

“He needs the training with competition alongside it, not just his structured rehab work with Ross. I’m hoping at some point in the next week he’ll join in training with everybody.

“Kelvin’s still not back on the grass yet, I think I’m right in saying he will be next week, he’s in a good place, and hopefully over the next few weeks, maybe after that Carlisle City Cumberland Cup game, we might have them all with some match minutes and available for selection.”

“With all of these lads, they’ve got to be right, because we need them for 12 games, not just for one then they’re on the sidelines again," he continued.

“Gime Toure said ‘I want to be back as quick as possible’ and I said yeah, but don’t be too quick. Make sure even if it’s ten games, you’re available for ten games.

“And that’s exactly the same with the other three. They’ve got to do what they can to come back fit, we’ve got to do what we can as a group of staff to make sure they’re as fit as a fiddle, ready to go and ready to come and impact when they get their opportunity.” 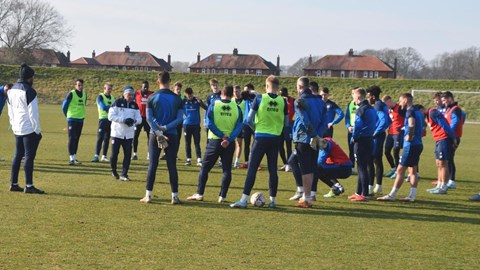 GALLERY: More from the training pitch

As previously reported, assisted in the medical department is club stalwart Geoff Haugh.

“I think it’s important to have positivity around the players, and Geoff is that kind of character,” he reiterated. “If we’re all doom and gloom and miserable, and ranting and raving, moaning at them all the time, nobody enjoys coming into work.

“They come in early in the morning, they all organise and sit and have breakfast together, you can hear them in the office, they’re all having some lunch together, they’ve got a dartboard in there, there’s always a bit of banter going on, there seems to be a really good feeling among them.

“That’s not me, it’s something they had going on before I came in. But when you’re winning games, everyone wants to stay around a little bit more.

“I was just in the gym before, believe it or not I do still go in the gym, I was doing my own bits of work, and they were all in there doing their strength work with Greg, really applying themselves well.

“That only happens when you’ve got a good feel. Nobody really enjoys going in and pumping iron and all that, I have to do it to keep my weight down, these are all fit lads. They go and do their work properly and that’s what you have to do if you want to get out of this situation.”