Assistant manager Gav Skelton was on pre-Newport press duties on Monday afternoon and he captured the current mood perfectly when he spoke about the positivity that’s flowing through the building following the last four results. 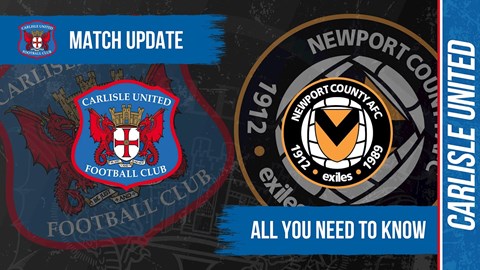 “The positivity around the place, it has an impact on everyone,” he said. “I’m sure just like us you go away on Saturday night buzzing, or whatever the word is, with that adrenaline pumping.

“You’ve got to be calm, but we’re no different. You can’t beat that feeling. It would be nice to be three or four goals ahead at times, and comfortable, but that adrenaline rush of a last-minute winner, you can’t beat it.

“You have to make sure you enjoy the good times. We’ve had some tough ones. It has been tough, I’m not going to lie, and you all feel responsibility for your own contribution to that.

“But it is so much nicer. That feeling of when you win, coming into the dressing room or driving home is completely different to what it’s been.

“When we’ve spoken to the players we’ve said, don’t drop your standards because that feeling of winning is so much better than the feeling when you’re not winning games. It’s important they don’t let their standards drop.”

And the raising of standards has brought with it an atmosphere, home and away, that has allowed the players to thrive.

“It goes hand in hand,” he commented. “The feeling, the support, you can’t underestimate how big an impact it’s had.

“Even the Orient game, they stayed with us when they had a bit of pressure, and it gave the players energy. It plays a massive part.

“The players feed off the support, and the positivity coming from them to the players really helps. We made a lot of last-ditch blocks and that’s a lot down to the crowd giving them that energy and positivity and confidence to do it.

“And when you get a couple of wins the players feel more confident, and the crowd realises that and gives them even more.”

A source of frustration over the past few seasons has been a tendency for the home side to crumble in front of a big crowd, but that was set aside as United won in the most dramatic of fashions at the weekend.

“That was good, because that was something I was conscious of,” he confirmed. “I never mentioned it to Simmo or the players but historically you know what we’re like, you did have that at the back of your mind.

“But if we keep working hard we’ll get those extra bits of luck. That’s what’s happened with the late goals. They’ve been massive, it means you’re not panicked during the game.

“First half, you think at the time they edged it, we weren’t at it, which we weren’t, but watching it back there wasn’t much in it. At 1-1, a few weeks ago, we probably would have gone on and lost it. The crowd and players would get nervous.

“To come back after that with that positivity was massive. When we got the free-kick with Callum, you thought something might happen. A few weeks ago, couple of months ago, you didn’t. Once you’ve done it once or twice, once you get that feel of the players, to gamble, rather than being timid or not committing, you do get that confidence from winning.”

And that confidence has to be sky-high at the moment, so is there a need to reel their feet back down to ground level?

“A little bit, but you’ve got to keep that confidence and try not to drop off it,” he told us. “Perhaps we weren’t right in the first half on Saturday, for whatever reason.

“You have to keep working hard because if you step off it, and things don’t go well, you lose that confidence. Keep your foot on the gas, keep that confidence and feeling going.

“Like I say, the positivity around the ground has had such an impact, so good things can happen, a team can totally change tack. I’m pleased at the moment, touching wood.

“I’m pleased for the players, they’ve experienced that. Your mind plays tricks but you go back to the 94/95 season, when they got promoted, that’s how you remember, the Warwick, the Paddock, the Main Stand, it’s been like that and I’m pleased they’re experiencing that.

“That feeling when you’re coming off. It’s not nice when you’re going around at the end of the game and you’re being booed. Accept that, no complaints. But that feeling of confidence, it must help the players.

“It must give them that massive lift. It’s good, for the ones that haven’t been with us long, to experience it and feel that positivity when they speak to other people.

“The last two away games have been brilliant, the last two home games it’s felt alive, like the Brunton Park we all remember. You start to forget all the bad days of the last 10 or 15 years but remember the good times! That’s how as Cumbrians we think of it.”