It was a disappointing night at Gillford Park for United as Carlisle City overcame the disappointment of conceding an early goal to bite back through Jordan Holt and Jordan Irving to secure progression to the April final. 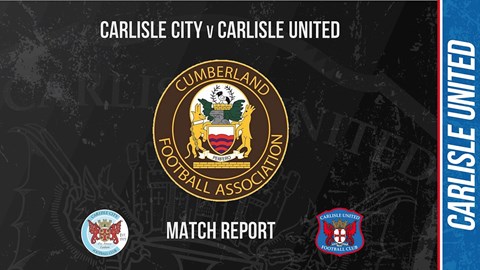 Speaking after the game, Mark Birch said: “We played at our tempo in the first half, at our pace, we did things quick, and when the ball went out of play we recycled it back in as quickly as possible.

“We had them on the back foot, we had some good passages of play and looked really comfortable. That was the same message to come out in the second half - if you get success at what you’re doing, keep it going.

“We got a good goal, it was a quick free-kick, played it down the line, got them on the back foot and that’s what you’ve got to do against teams like this. Second half we let them back in the game, we played to their game plan, not ours.”

And the equaliser came with the away side having temporarily lost their shape after a foul have been committed.

“It was just a free-kick on the halfway line, but we didn’t take up early enough starting positions,” he told us. “When the ball goes dead you’ve got to come alive and make sure you’re not going to get caught with sucker punches like that.

“Then, of course, we were down to ten men when Charlie Watt got sent off. Personally l don’t think it was a penalty, I don’t understand how the ball comes 30 yards up the pitch and, if anything, I think he’s kicked Charlie.

“But these things happen and at the end of the day we can’t go round blaming the ref. We don’t think it was the right decision but there was a lot more wrong in our own play in the second half without blaming the referee.

“And for Charlie, he’s got to learn. The thing is with him, is he going to learn from these things? He’s had his fair share of yellow cards now and there comes a time where things have got to sink in with him.”

Finding it hard to hide his disappointment and frustration at the result, he added: “I’m from a generation in football that wants to win, whatever you enter.

“I don’t like seasons dwindling out, coming to a close. When you’re at the business end of the season you want to be in finals, whether it’s the county cup, FA Youth Cup, you want those experiences, learning how to win, when to win. 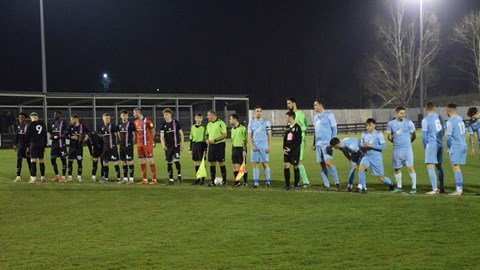 “At some stage you end up playing in these games and you’ve got to conduct yourself properly on the pitch, play to the standards all the time, because it means a lot to these lads, this game, this competition, to Carlisle City. It’s got to mean the same to our lads as well.

“Credit to Carlisle City. They played their game, did exactly what they wanted to, caught us with a sucker punch.

“When they had to they whacked the ball out of play, made the game dead, we couldn’t get any steam going in the game and fair play to them, full credit to them as a team, they’ve come out and they’ve done a job.”

Manager Paul Simpson was in the stands to run the rule over his players, and the youth boos spoke about the need to send him a positive message.

“You want to put on a performance when your manager is watching, and that’s what we said to them before the game,” he confirmed.

“Which one of the players in that dressing room will be the one to catch the manager’s and the fans eyes. Who will be the one people on social media are going to talk about in the right way at the end of the game.

“Football’s all about opportunity, and grasping opportunity. If you’re not in the team, and the first team are on a good run of form at the minute, you’ve got to put yourselves at the front of his mind just in case an injury or something else comes along that means changes need to be made.

“We had a lot of pros on the pitch. Only they know whether it’s complacency or not that meant they didn’t quite get there after the break.

“We never got that head of steam going in the second half. We have to take responsibility ourselves for the way the game ended up going.

“I don’t think we played in their half enough. We didn’t get the ball into the vital areas of the pitch enough, we didn’t turn them, we played in front of them.

“That’s what teams at this level, and full credit to them, want you to do. They don’t want you to play in behind them, they want it where they can see everything.

“I think whether we got a little bit complacent, thinking this game was going to be easy, it certainly didn’t look that way in the first 45 minutes. But we stopped doing the things that were working and if you get success doing something in a game, you’ve got to keep doing it right to the end.”

A positive to come out of the night was 60 minutes for Gime Toure, back following a long spell on the sidelines due to a groin injury.

“With Ross the physio the plan was to give him an hour and see how he goes from there,” he explained. “We got him to the hour and that’s something for him to build on as an individual.

“He looked a bit rusty. The good thing with Gime is he always wants to get on the ball. His touch probably wasn’t what it was, his little jinks to beat the man weren’t what he can normally do, but for him the big picture is he’s back playing football, and that’s important for him.”

The City defeat capped off a frustrating few days, with the youth team having dropped out of the title race in their division following an unexpected loss at the hands of Oldham.

“It’s been one of those weeks,” he agreed. “Saturday was disappointing, total opposite to this game, to be honest.

“We didn’t get going until the second half, but once we did we should have won the game comfortably in the end.

“But, and I’ve said this all along, when we’ve been winning games comfortably we still haven’t been ruthless enough in front of goal.

“They’ve drawn games where you’ve got to have that experience of being ruthless in everything you do, especially when defending your own goal and attacking the goal at the opposite end. Again, it’s come back to bite us on the backside a bit.”