The fixtures are out, and it's been confirmed that United will kick their 2022/23 campaign off with a home game against Crawley Town on Saturday 30 July. 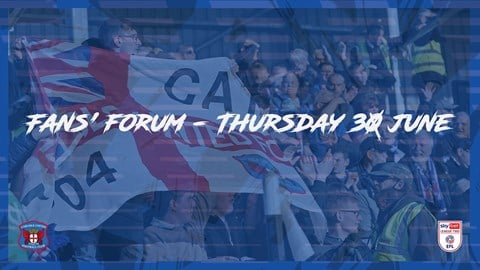 The visit of the Red Devils pits United boss Paul Simpson against his former FA colleagues Kevin Betsy and Dan Micciche, who have taken over hotseat duties at the People’s Pension Stadium recently.

Our first away league game, the following Saturday [6 August], is the long trip into Essex to face Colchester United in what is always a tight encounter.

There are no scheduled home Tuesday night league fixtures ahead of Christmas, with all three of the midweek games out on the road.

We host local rivals Barrow on Saturday 10 December, with the return meeting with the Bluebirds towards the end of the campaign on Saturday 25 April.

The always popular festive fixtures see us host the Bantams of Bradford on Boxing Day, with a trip to Doncaster Rovers on New Year’s Day.

Good Friday is a home meeting with Tranmere Rovers [Friday 7 April], with Easter Monday a bobble down the M6 to Walsall.

Our last home game is the penultimate match of the game, with the Class of ‘92’s Salford City popping up to Brunton Park.

And fixture 46 is a trip into London to play Sutton United, with United once again rounding things off on their travels.

Manager Paul Simpson said: “It's funny because everybody in the offices was telling me that they felt we were due an away game to kick things off, and I had to sit quiet as I was thinking - damn, I would really like a home game!

"I tend to scan the fixtures and look at the first ten games, then at the last ten. Those games set the tone for how you start and, more importantly, you want to peak for those last ten so that you get yourselves over the line with whatever it is you want to achieve.

"So, it's good to start at home, but it's a lovely local fixture at Sutton to finish! Look, you have to play all 46 games, so when or where they happen doesn't really matter.

"It's how you come out over the course of the campaign that matters to us all."

"Picking a few out, I'm looking forward to seeing Kevin and Dan at the end of July," he added. "They will bring a good footballing philosophy to Crawley and it will be a test.

"The Bradford game on Boxing Day will be excellent. They'll bring thousands and I'm sure the atmosphere will be fantastic.

"We'll digest it all today, and we'll start to prepare for what we hope will be an exciting season."