With the latest addition to the group, Ben Barclay, having made his first appearance for the club at Kendal on Wednesday night boss Paul Simpson confirmed that he’d come frustratingly close to a sixth signing, only for it to fall away at the last possible moment. “I’m really pleased with all five of the new signings,” he confirmed. “I think they’ve brought a freshness to the group, a competitive edge, and I think they’ve shown they’ve got some ability as well.

“It was a tough week for Ben to step in last week and I’m sure it was a bit of a surprise for him to find out that he was surplus to requirements at Stockport.

“He’s stepped into it, I’ve been really pleased with his communication, and he looks a really good, comfortable footballer. Overall I’m pleased with all of them, they’ve all settled in, and I’m hoping that there’s still going to be more to come.”

“I’ve been disappointed this week with a couple of situations that have fallen flat on their backside,” he continued. “We were in a position on Tuesday where we thought one wasn’t happening, then I had a conversation with him and it definitely was.

“It was going to be the medical on Wednesday then he decided it wasn’t happening again, and things like that just do my head in.

“You get a plan in your mind, and bear in mind this is something we’ve been going at for a full week.

“It wasn’t something that happened on a whim, we’d been working on it for a week, and to think that we’ve got the medical booked and it doesn’t happen is really frustrating and disappointing.

“That one is dead in the water as far as I’m concerned. I believe you have to get people who really want to come and be part of it. If they don’t, if there’s any umming and aahing, I’m not prepared to have it. “As a football club, and football manager, you have enough problems without bringing problems on yourself. If you’ve got someone who’s not totally committed you’re just asking for trouble. That’s gone.

“As are probably four other experienced centre-backs who we’ve tried to get. They’re all dead in the water. Again, that’s because they haven’t shown the level of commitment that I certainly got from those who’ve come into the club and the other guys who were already here.”

“We have to move on from it,” he said. “I’ve said it before, we can’t complain and worry about the ones we don’t get, I’ve just got to focus on those we do get.

“It’s proving to be really difficult at the moment to get the experienced defender that I want. What I will say is that I’m not going to stop yet, there are other irons in the fire and things that we’re considering, and hopefully something will happen over the next week or ten days.

“In terms of positions, to be honest I’m looking right through the group at the moment, and I do have priorities because of the money that’s left available.

“My priority is to try to get another defender into the building. We’re a little bit short in the right wing back slot, and I’d like another centre back for security. 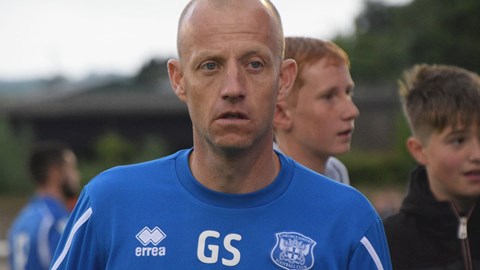 INTERVIEW: It's amazing what gets put on there

“I always say this, and this isn’t me complaining about budgets, but it all depends on what is left. We have to work within the restraints of the budget, I knew that when I took the job, and I’ll get on with it and spend it as wisely as we can.

“We’ll hopefully assemble a group that will start the season properly on 30 July, and looking at that I have to say that I don’t want anybody to go out. As it stands at the moment we need them all with us.”

On trialists, and Jamie Devitt, he commented: “We haven’t got any lined up at the moment. There was talk of a goalkeeper coming in next week to train but I haven’t heard anything back on that yet.

“I can sit here and say no there isn’t, but there might be one on Monday in terms of a keeper coming in. We’ll see how that one goes.

“I think I’ve exhausted who might be available, and I’m now looking at players possibly who have still not got a contract, but also I’m at a point where I’m thinking we’re at that stage in pre-season where younger players have been used early on by the first team, Premier League and Championship teams, who’ve had international players away are tending to be back now.

“That means the younger players are surplus to requirements and ready to go out. We’re starting to look at that type of player.

“We think we’ve exhausted the channels of out-of-contract players and the ones we’ve enquired about have said no so far. We’ve just got to wait and see what comes.”

“With Jamie, it’s too early to be making a decision,” he insisted. “He missed a chunk of the training, so he did a few days leading up to the Kendal game where I felt as though he was ok to go on.

“He will start against Workington and hopefully get 60 mins. It’s a case of him showing us he can stay fit.

“I’ve made it clear I like Jamie as a character around the place, he showed his ability on Wednesday at Kendal, albeit against a club way down the pyramid from where we are.

“It’s going to be interesting to see. He’s not actually trying to force my hand at the moment. If he did I’d have to be saying I can’t give him anything at this moment in time.

“It’s a case of him staying with it and going and seeing how he does over the next few weeks before we have to make a decision.”