United wrap up their pre-season programme with a trip to the seaside to face Morecambe on Saturday afternoon and boss Paul Simpson is expecting another stern test from the League One outfit. 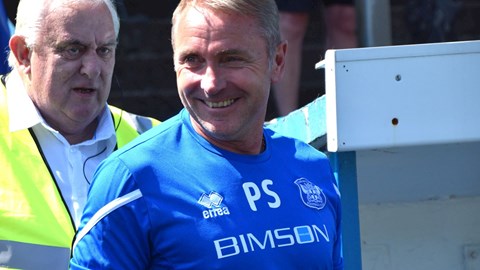 “It’ll be another tough test,” he said. “I think the way Morecambe play, they’ll be in our faces, they’ll probably be thrashing around us, and there probably won’t be as much football as we saw from Bolton.

“I’ve assessed Morecambe as we got towards the end of this week, so we’ll get ourselves prepared and come up with a bit of a plan.

“That’s more just to get the players used to how I want to work this season in terms of the opposition analysis to prepare, and we’ll see what comes from it.”

“I’ve already got things in my mind that I want to look at in the game so that’s the first area of focus,” he added. “When you get to this point in pre-season it’s more about being able to adjust and adapt.

“I’ve seen things we need to work on, and both games we had on Saturday and Tuesday gave us more to look at and think about.

“I’d be very surprised if I completely show my hand at Morecambe, as to what my starting team will be, and I’ll probably base it on who I think needs 90 minutes. 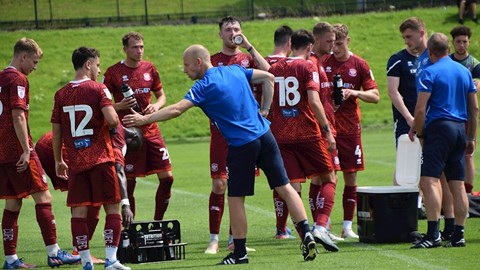 MANAGER: The kind of test we wanted

“Whatever I do decide, I won’t be doing it to try and be clever. It’s more about trying to make sure all the players are at a similar level fitness wise.

“I won’t be playing a completely different shape. I believe in consistency and trying to get a structure going. It will be about that.

“It will be a case of making sure all players are at the same level so, come Crawley, whoever gets selected is in a decent state of fitness to go and perform.”

And, as he’s said before, shape aside, it’s still all up for grabs for that first league game of the campaign.

“Without a doubt there are still shirts to play for,” he confirmed. “The players have worked extremely hard and I've been really pleased with everybody.

“I’m disappointed that we’ve picked up a couple of injuries along the way, that’s never what you want to do. I suppose that’s just the nature of pre-season when players are working hard after a bit of a break.

“We’ve just got to try and keep them all out on the grass and available, and hopefully come the Crawley game I’ll have the majority of the group to select from.

“With where we are, I could always say that I wanted even more players in, but there’s no point in me worrying about that side of things.

“If I haven’t got players I went for, that’s just how it is. Worrying about that doesn’t count for anything.

“I’m pleased with where we are but I know we need to be in an even better place come the Crawley game.”