United’s second pre-season friendly of the summer at Kendal was another entertaining affair, with goals scored in each half thanks to a high tempo approach from the visitors. 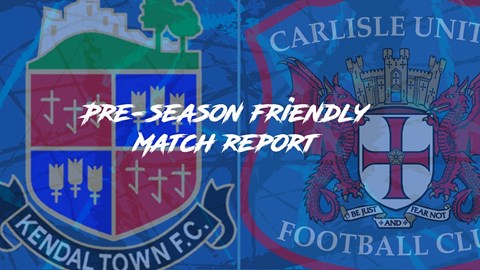 Sonny Hilton and Ben Barclay made their first appearances since joining the club, and the remainder of the first-team squad was joined by second-year scholars Nic Bollado, Ryan Carr and Kai Nugent with starting line-ups split between the halves of football.

Speaking after the game, assistant manager Gav Skelton said: “It was an excellent workout. People will think it was a walk in the park when they look at the score, but we got a lot from it.

“I thought there were some positive signs, but we’re definitely not getting carried away. The way we played and the way they were taking information on board was good, and the cohesion amongst the players is what we’re looking for.

“It’s a pleasing day’s work, because we trained this morning [Wednesday]. That was a light session and the players got their 45 minutes, and you’re looking for their targets and distances.

“In terms of the performance and, with all respect, it was on a tricky pitch, I thought the quality was really good.”

The tone was set with a fast pace from the visitors from the moment the whistle blew.

“We moved the ball well and that’s something the gaffer worked on yesterday,” commented. “We saw glimpses of it in the game but, like I say, we’re not getting carried away.

“There were some really pleasing signs and you really couldn’t ask any more from them. It’s been a really positive week through Monday, Tuesday and Wednesday so hopefully we’re going in the right direction.

“We’re not getting carried away at all, but we’ve seen some good work in pre-season so far. It’s been really tough for them. Like any footballer you always moan about being tired in pre-season, but we’re pleased, because we’ve pushed them. 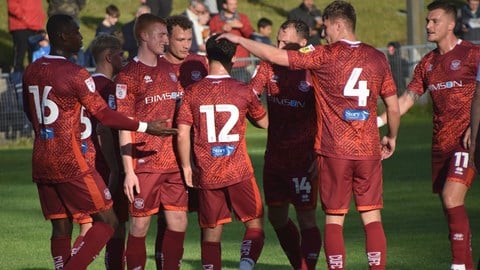 “It’s been a full week with a game 11v11 on Monday and two sessions on Tuesday, and I didn’t think they looked tired tonight. That’s good to see as well."

“You want to get something from it when you play these games,” he continued. “It’s vital. We had a plan tonight of what we wanted, and there’s got to be a purpose of being here.

“That comes from the intensity that we want to play at. If you want to do anything in football you’ve got to do it with intensity.

“I could feel it in the warm-up that it was going to go that way. Sometimes you get in the warm-up for pre-season games and get a feel, and the pitch is tricky, but I felt right from the off there was a purpose.

“I said to the manager actually – I said they’re right at it there. To be fair, they were. We were pleased about it, they went about it in the right way.”

INTERVIEW: It's amazing what gets put on there

And on the number and quality of the goals scored, he said: “It’s the way they scored them that’s pleasing as well.

“They worked it well and the movement was good. You could see some link-ups with certain individuals which shows a good understanding already.

“We could have had more, but it did feel ruthless. We created a lot of opportunities with not overplaying. Sometimes you can get caught into playing too many passes. There was a real edge and purpose to it, and a bit of competition to try and score.

“That comes from training and hopefully from the quality of the player we’ve got. We scored from set pieces, which is always pleasing, and we didn’t concede.

“Gabe Breeze was excellent when he was called upon and it kept the clean sheet, so that’s pleasing for him and Gez. They worked on that type of situation, I watched them do that the other day, so that shows us Gabe is taking that on board.

“The fitness levels look really good, and the main thing from tonight was not picking any injuries up. Touch wood I don’t think we have, so that’s good.”