There was a real injury concern for the Blues in the first half of the Hartlepool game on Tuesday night when right back Kelvin Mellor felt the full weight of Marcus Carver when the pair came together to challenge for a high ball in midfield. 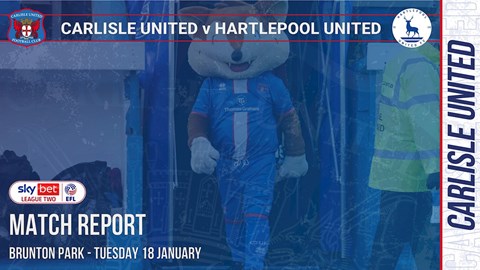 “I don’t know what is yet, but it looks really swollen,” manager Keith Millen explained. “He’s got the dreaded boot on, but hopefully it’s all precautionary, we’ll just have to wait and see.

“But it doesn’t look good. We’ll have to see how the swelling goes down. He wasn’t looking good after the game so I’m gutted for him, because he’s been playing really well for us.

“Someone’s misfortune is another person’s chance, and Joel’s come on and showed glimpses of why we brought him to the club.”

“He got forward really well,” he added. “He looked a real threat and danger. I’m really pleased for him because he’ll take a lot of confidence from it.

“When I watched him that’s what I saw in him. He’s got a lot of athleticism, he’s a modern full-back that can get up and down the line. We need our full-backs to do that because it gives us width.

“Joel loves to get forward. He has good quality on the ball, and it was good to have him there. He’ll only get better with the more he plays because he can see a pass.

“It’s the same with Jack [Armer], our full-backs get forward well, and I want that from them. I ask them to get forward, get wide, get crosses, so he fits the profile of what I want.”