United boss Keith Millen gave us his thoughts on the narrow away defeat at Harrogate shortly after the full-time whistle had blown at the Envirovent Stadium on Tuesday night. 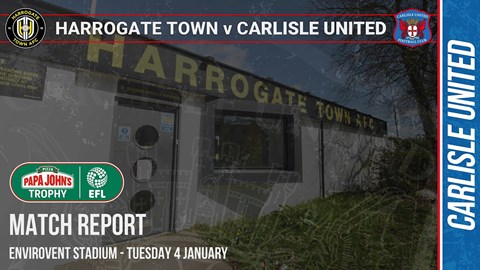 “I’m really disappointed, firstly because we’re out of the competition, and we knew how close we were getting,” he said. “We’ve done well in the four games to get to this stage and we didn’t take it lightly.

“I went full-strength because I was desperate to win it. Secondly I’m annoyed because we lost the game when we shouldn’t have.

“There are ways of losing games, and you could say that we did that, because in the second half we dominated. We were much braver, we had a lot of possession and it was the lack of quality in the final third again that let us down.

“I was pleased with the second half as far as us getting on the ball more, and that’s what I wanted to see.”

“We had a terrible start to the game, and the goal we gave away was our own mistake,” he agreed. “That was poor and it was off the back of us not starting particularly well.

“They were brighter and sharper, but we sort of got going as the first half went on. I said to them at half time, with us kicking down the slope a little bit, I felt that Harrogte would sit back a bit more and I just wanted us to get out there and dominate.

“I wanted us to be more creative, demand the ball, and in that respect I was quite pleased because we did that. We just couldn’t score at the end of it.” 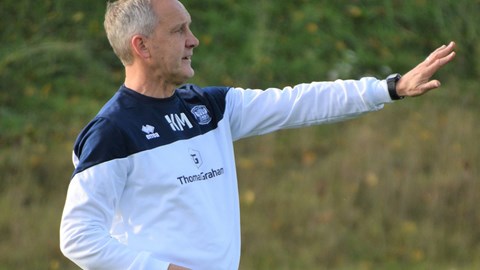 MANAGER: Hungry is a good word to describe him

And it was the quality of the chances created and missed that made the result harder to swallow.

“In the last two games we’ve been really solid throughout the 90 minutes and we’ve scored from set pieces, which is great, because that’s one way of winning a game,” he commented. “I thought we were second best in the first half of this one, they were sharper, but we totally controlled it after the break.

“That was more of the identity that I want to see from us. I don’t just want us to be brave, because we’ve had that recently in our shape, our desire, our defending and organisation.

“All of that is there, we’ve got that, but I want us to show more composure and be braver in the situations that can win us games.

“I never moan at players who make mistakes, but I will get angry if people don’t show and hide away, or if they don’t help each other in possession.

“I am really disappointed because I wanted us to go through. There are a lot of positives to take from the second half, but we still need to be better.” Having gone behind so early in the piece, it was the Blues who looked the more likely as the 90 minutes went on.

“I was pleased with the response but that’s where we are now,” he told us. “We’re not where we were when I first came into the club, so if we do go a goal down I think there’s a belief there in what we’re doing that we can get back in it.

“I didn’t want us to just make it a fight and a battle, and Sam and Jon up front are fantastic at working hard and competing. It wasn’t really working, so I felt I needed to change it a bit because I knew we needed to move the ball in possession much quicker and better. We did that, but we didn’t take our chances.

“In that second half that certainly wasn’t a team where heads had dropped. We had a lot of desire to get on the ball, we got in good areas, but we just need to finish the really good situations off.

“We’ve known that, it’s been the same since I’ve been at the club, and that’s why we need to try to bring more players in to try to help us get better.

“It’s good in a way that we are creating chances, we’d be more concerned if we weren’t. We’re not finishing enough, we keep working on it in training and I’ll keep working with the players and we have to improve that.

“The players here need to improve, and if we can bring in some more players that will help us improve, that’s what we’re going to try and do.

“I think we saw that it was a game that was there for us to win. I really fancied us to win, so there’s no comfort in the fact that we haven’t got another cup game.

“I’d much rather have that and, if we can, strengthen the squad to make sure we could cope with the added games better. We’ve got to get over tonight and then look forward to the league game on Saturday.”

And with that game coming up quickly, he admitted that he’d need a day to reflect before switching the focus to the weekend home fixture.

“I am frustrated because I like to win games when you feel you deserve it,” he said. “I wanted the lads to take it by the scruff of the neck, and we sort of did, but it was me that was really driving it.

“I just think they need a bit more belief in what we’re trying to do. There were enough signs there, a lot of good things there. Once we get over the disappointment of going out of the cup there will be a lot of positives we can take into Saturday’s game.

“We’ve not won enough games but there’s been a momentum to what we’re doing, not just in the way and shape, but the attitude and mindset of the players.

“That’s developed as the weeks have gone by and we’re in a good place. Confidence, belief, desire, that’s all there. Now I want us to have more desire to dominate games in possession, but have an end product. That’s what’s missing and what I need to address.”