An early second half thunderbolt from Sonny Hilton earned a Carlisle XI a friendly victory over Gretna on Tuesday night, and we spoke to assistant boss Gav Skelton about the game shortly after the full-time whistle had blown. 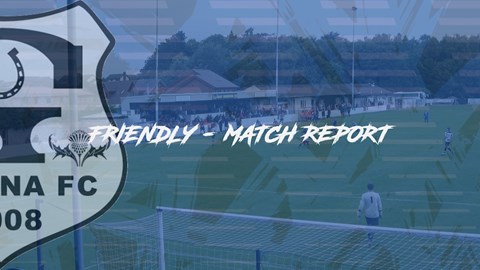 “We’re really grateful to Gretna for inviting us up,” he said. “They got a decent crowd in and it was nice to get a game against them.

“A few of the young boys got a game, as did a couple of the pros, so it was a worthwhile exercise. Some of the players playing haven’t even met each other, especially when it comes to the first years and pros.

“I thought the professionals set a good example, Corey was brilliant, Sonny scored a great goal, and it was nice to get some of the first-year lads on.

“Young Robbie Swinburn, he looked a boy, but I thought he did well, and that’s why it’s a good exercise. I always like the YTs playing with the seniors, it brings the club together.”

And on the importance of getting minutes into legs, he added: “I thought Corey set an excellent example. It’s difficult at times, but he led as a captain, and the goal will do Sonny’s confidence the world of good.

“Wow, what of finish. It lit up the evening. It wasn’t a fantastic spectacle at times, there was lots of hard working without too much quality - but that was a bit of quality.

“With the others, everyone that didn’t play on Saturday for whatever reason played tonight. Jack Ellis was better in the second half, he looked like a man and a pro.

“Lewi Bell needed the game, Ryan Carr was good, he’s trained with the first team all this year, his attitude was excellent.

“The young pros got their games and it’s important. Sometimes they don’t get 90 minutes in their legs in pre-season – you have to give them fair opportunity to get good game time and that’s what it allowed them.

“Often they can come on when they’re needed if they haven’t played for two or three games and people think they look way off. That’s natural if you haven’t played and that’s why these games are good.”

It was a first run-out for the Blues for new keeper Michael Kelly, who played the first 45 minutes at Raydale Park.

“Goalkeepers, even if they don’t have a lot to do, I feel that match practice is really important,” he commented. “Sometimes you think, what do they get from it if they haven’t done much, but it’s that match sharpness, match awareness, concentration.

“He’ll have got a lot out of it. He’s definitely not a shy character, so he’s bedded in with the group well.

“And playing together and winning helps with that feel-good factor. You have each other’s back. It builds the bigger platform.

“Obviously with Gretna we have a great relationship anyway. They’re always very accommodating when we need to train.

“I’m sure it won’t be long before we need the facilities, so it’s important to keep that relationship. I’m sure we’ll be up, hopefully not too soon, but you never know. It’s a good facility for us. It’s only ten minutes up the road and it’s fantastic.”

We couldn’t let him go without a quick reflection on the opening day win.

“It’s brilliant to get that,” he agreed. “It’s always nice to start with a win. As pleasing as the result was, the performance was positive.

“The only thing missing, as the manager said, was that second goal. But we move on to Saturday, that one’s done.

“Every game’s massive and we go to Colchester in good heart, but obviously respecting the opponent.

“That was the same against Gretna. You win and go in the dressing room and you feel good about it. We won’t kid ourselves, the performance wasn’t brilliant, but if you win it breeds confidence.”