United's first away trip of the new season was the long haul into Essex for the Saturday afternoon game against Colchester.

The starting XI was unchanged from the opening day team that faced Crawley at Brunton Park, but there were places on the bench for the first time for Jamie Devitt, who had recovered from a short Covid absence, and new arrivals Jayden Harris and Jack Stretton.

United probed with purpose from the kick off with Armer, Moxon and Edmondson working well off a touch from Dennis. The cross was cleared, and Sears helped it on its way.

More good away football saw Moxon switch it for Barclay to nod towards the right flank. Back fed it back to Barclay, and he floated it for Gibson to touch. The winger dropped a shoulder to beat his man, but the delivery was blocked. Moxon took the corner, but it was nodded away as Feeney jumped.

The U's were lively on the break and Sears was suddenly in space on the edge of the area. He checked inside and aimed for the bottom corner, but it struck the post and Barclay swept up the loose pieces.

There was another opening for the visitors when Moxon looked up and spotted Edmondson on the move. A chipped pass needed a touch from the striker, but he had to stutter his run and the ball sailed free.

Carlisle thought they'd scored on 10 minutes when Gibson chopped a beauty of a delivery towards the back stick. Armer arrived to meet it and he nodded it into the ground. Hornby could only watch as it bounced once, then a second time, on its way to skipping past the target.

Sears popped a low drive at Holy when he continued to provide an outlet for the hosts, but United were gifted a chance when Clampin misjudged a backpass from tight by the touchline. Dennis had just Hornby to beat, but the keeper stuck out a hand and that was enough to divert the shot.

It was a good and confident start from the travellers and Moxon, Armer and Mellish sliced through a static back line with neat play, but the cut back from the latter was behind Dennis and Edmondson.

It was Colchester who took the lead when possession was overturned as United hesitated when looking to get forward. Hannant pushed on, and he received it to feet, which allowed him to step inside. Chilvers was up in support and he kept his 19-yard grasscutter low. Holy dived but he could do nothing to prevent the goal.

The Cumbrians wanted a response and Gibson showed trickery to trap the ball, adjacent to the corner flag, before dinking it past his marker. His next touch found Edmondson, but he had to backheel it and that allowed Hornby to mop things up.

Dennis tried his luck from distance after Feeney had cushioned a pass his way, but Hornby was able to drop and make a comfortable save.

Corners from Moxon were repelled as Carlisle kept the pressure on, and a huge kick from back to front from Holy was nudged inside by Armer and Edmondson. Moxon lined one up but it came off the top of his boot and it screwed well wide of the post.

Gibson created another half chance just before the break when he asked for it off Dennis, after he'd controlled well. The cross whisked past Edmondson, who got the slightest of touches with a glanced header.

The deserved equaliser came a minute before half time when an initial corner from Moxon was sent back his way. Gibson trapped it first, then the midfielder curled a wonderful delivery for Dennis to contest. The header was inch perfect, and it dipped wickedly into the corner of the net, making it two in two outings for the striker.

There was a great chance for the visitors to take the lead at the start of the second period when Guy intercepted in midfield. Back was in support, and his outswinger of a cross found Dennis 10-yards out. He dived to head it but he didn't get the right purchase and it bobbled well wide.

Sears was momentarily through for the U's when Tchamedeu streaked forward, but he was quickly closed down. The striped shirts had plenty forward and Skuse and Sears were both involved as they bore down on Holy. The keeper was excellent as he dived to make a one-handed save that prevented a certain goal.

Good away team approach play was followed by a swiped effort from Gibson that flew high, and a deflected punt from Judge at the other end curled at Holy, who plucked it out of the air.

Nouble had a good chance when Tchamadeu centred, but it was a ball that bounced off the surface, which made the header awkward. Holy watched it all the way.

Jack Stretton was on for his debut with just over 20 minutes left to play, and his first duty was to provide a presence for a Moxon free kick. That somehow evaded everybody as it bounced behind.

A free kick from Eastman was popped back across the face of goal by Nouble, but Feeney did enough to get in the way before Coxe could make it count.

Holy handled crisply as crosses started to come into his area, but Hornby was needed when Gibson spun his man before lifting it deep. Armer connected, but the keeper had closed the angles and he beat it away.

Jayden Harris was also handed his debut, when he replaced Moxon late in the day, and there were late chances for both sides as first Gibson had a rasper partially blocked before Akinde blazed over with the last meaningful kick of the game. 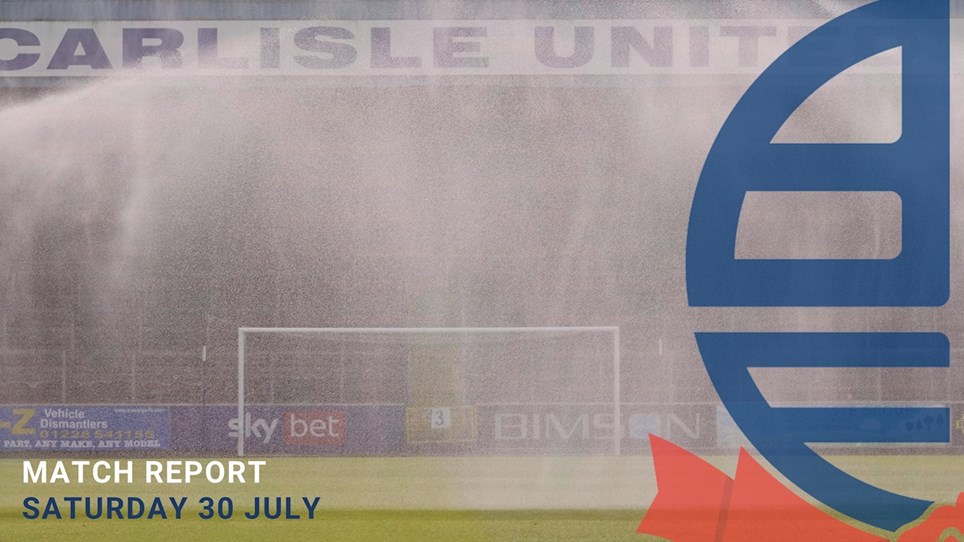 
United returned to the hallowed turf on Saturday afternoon when they hosted League One side Bolton Wanderers in a pre-season friendly.