As revealed last week, the line-up for this month’s Legends 94/95 v Legends 05/06 game is already bursting at the seams with big names and favourites set to grace the green grass of home once more, and another local lad has tonight committed to giving his support to the eagerly anticipated event. 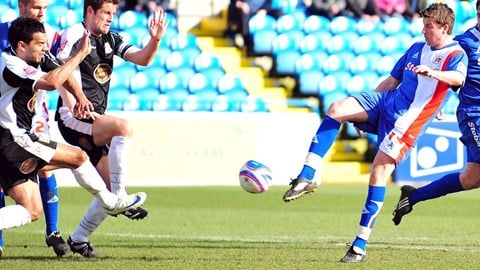 We’ll leave it to one of the organisers, Chris Lumsdon, to explain more.

“The fact that the game is raising funds for former United players who might need help in the future really seems to have captured the imagination of everybody,” he said.

“So much so that Dean Henderson is supporting the cause with sponsorship, and he’s also agreed to be involved in the event in some way on the day.

“Dean is a Cumbrian, he knows what both sets of players meant to the fans, and it comes as no surprise to us that he’s agreed to help out.

“I think the fact that the money being raised is for such a good cause is making it a no-brainer for so many people to want to be involved.

“We’re all just really looking forward to the day.”

The 25-year-old joined Premier League giants Manchester United at the age of 14 having cut his teeth in the Carlisle academy system.

29 appearances for the Red Devils have been complemented by loan spells with Grimsby, Shrewsbury and Sheffield United, with 170 career appearances in total to his name.

And another former hero confirmed today that he’ll be pulling on the shirt once more - and we’re expecting it to be his trademark ‘three sizes too big size’ style that he used to model during his five seasons with the Blues.

“Brendan McGill will be playing for us, which is more great news,” Lumsdon told us. “If you think back he liked the long-sleeved shirt, and for it to be baggy, so we’re expecting more of the same.”

Winger McGill played over 175 games for United, netting 19 league goals, and was a real thorn in the side for defenders with his positive approach and pace.

Also popping along to add to the mix are Gareth McAlindon, David Currie, Derek Mountfield, Paul Proudlock and Dean Walling.

The respective teams will be managed by Mick Wadsworth and Paul Simpson, with former physio Neil Dalton helping out on and off the pitch.

Kick-off is at 1pm on Sunday 24 April, right here at Brunton Park.

Purchase your tickets online HERE (we're currently experiencing online issues, but expect to have these resolved soon), in-person at the ticket office or by calling 0330 094 5930.