An equaliser from Brennan Dickenson with almost the last touch of the game [in what was his 250th career appearance] earned the Blues a point at Brunton Park on Saturday afternoon but manager Chris Beech admitted frustration afterwards as he again watched his team start slowly and leave themselves with a mountain to climb. 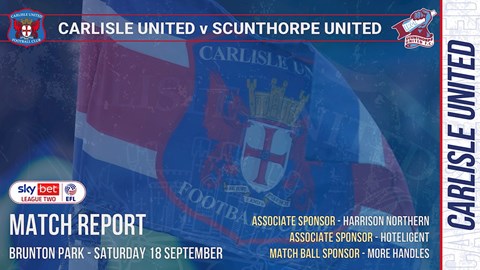 “I’m getting fed up of slow starts in first halves,” he told us. “The game starts, we’re on the counter, we can win a header on halfway but don’t go for it.

“Two players step away, Joe [Riley] slips more than I’ve ever seen him slip in the first 10 minutes, including partway to the first corner. The ball comes in with no major threat, hits Kelvin [Mellor] on the knee, and we’re giving away things that aren’t really – I don’t want to say not earned, because Scunthorpe are fighting very hard and well for their manager.

“But those situations are very avoidable and we’re creating them for ourselves. We had our fingers burned a week ago because of it but we’ve gained something today. Unfortunately the value of what we’ve done isn’t the same.

“That’s what happens sometimes. Giving the head start, that’s simply not good enough and we have to put that right. From the last two games, within the first halves we’re not marking from corners.

“Players get the responsibilities for these set pieces and sometimes it happens in football where they’ve not followed through on the information you’ve given them. What I was really pleased with was the character and response of the players in the hole we’d dug ourselves into.” 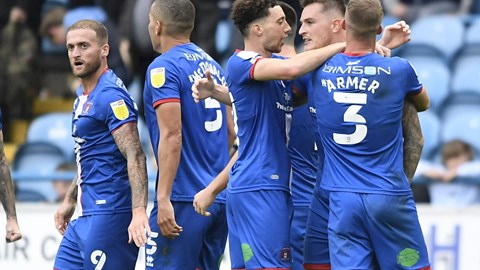 Having worked hard to get into the game, it was important to back that up with something to show at the end of it all.

“Again, we’re disappointed that we allowed ourselves to make things too difficult, but we saw very good character and attitude and a good response,” he said. “The substitutes made a difference, but you don’t set up to play like that.

“To concede the two goals, it was two corners, the first one I think maybe had two or three contacts, never mind the first, and the second one was a free header.

“When you look at that from the sidelines you’re very disappointed because you haven’t got in the game and it looks like it’s going away from you before you’ve even started.

“Suddenly we’re in a very difficult position, and we’ve got ourselves in a hole. The players do deserve credit for digging themselves out of one, but we have to be better to not create one.

“I’d agree that we didn’t recover from their first goal and Scunthorpe, what a week they’ve had. Every credit to them, the manager and players that represented them today. They’ve got something early and wanted to fight every inch to achieve something, so every credit to them.”

And the second goal of the day came moments before half time, leaving the Blues with an even bigger task to face through the second 45 minutes.

“When something like that happens it’s important you don’t panic. There was a stage within the game when me and Gav were discussing how we were going get back into it.

“It’s vital you don’t listen to the noise, and stay level-headed in situations like that. I’ve been part of many a defeat, some of which were big defeats at my other club helping my manager out.

“It’s important you stay in a game, and while you want to get the first goal when you’re 2-0 down, it’s vital you don’t concede the third, because three can become six.

“When we get the goal back, a great learning curve within seven days, there was a bit of impetus to us that we didn’t see at Crawley when we should have stepped on and won the game. From that perspective I’m very pleased.”

“There are different ways of getting into a game,” he continued. “You can pass a team off the pitch, we played probably saw more football in the first half and had less invasion, and if I’m a Scunthorpe centre-half in the first half I’m comfortable, I feel great.

“One of them is on the scoresheet and they’re having a great time. It’s not something we try and achieve, but we allowed that to happen. We can’t let that happen.

“The players know how I feel. They’re right behind what we’re trying to do, but you can’t create that hole. They’re big holes to fill once you’ve created them. 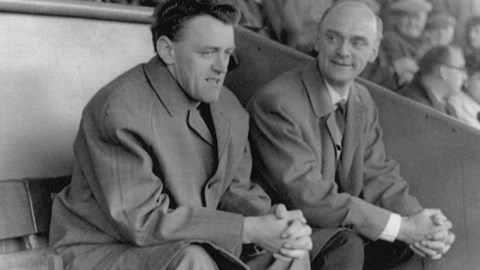 “And I totally understand the grumbles from the fans. We all want three points, we all want the same thing, to see some honest, committed behaviour. We want to see great energy.

“The supporters were unhappy at half time, that reaction is new for the players and a new one for me. We’ve not put ourselves in those positions since I’ve been here.

“We’ve always been generally on our front-foot at home. We’ve generally enjoyed a strong home record, which we are still in the league unbeaten in, we have to try and continue that, but of course we want to win games.

“This time last year we were good at getting three goals, not necessarily keeping a clean sheet, but we were good for three. We’ve scored two in 45 minutes; we’ve just got to get that first 45 minutes better.

“I thought some of the players within that, Corey Whelan, Jon Mellish, unbelievable. They didn’t waver. They were asked lots of questions. They were vulnerable because we were pushing on so much, but I thought they were really good, at a place where you’re on the precipice of a cliff, they handled it really well.

“Jordan Gibson cracking on, Lewis Alessandra made a difference, Brad’s running round, Brennan’s making a difference, it was very good in the end, but not good enough at the start.

“I’m not going to argue with supporters, they know what they want. The views of supporters come from all different factors and areas, but I was really pleased with generally how we played on the front-foot, and the energy we showed in the second half when it was against us.

“It’s very easy to turn down and away from that point. It’s not something I had in my character. My upbringing, I’m a fighter, I’ve never had anything given to me, I’ve always learned to try and do your best, go to the end and fight for every inch you can gain.

“Of course when the team represents that, we have real great days. When we respond on days like today, well done to them.”