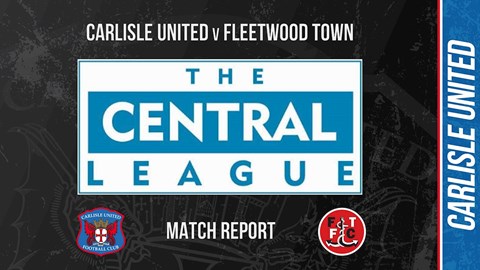 “Both keepers made some good saves, it was end-to-end and very good for fitness,” he said. “You expect it to be a bit cleaner and tidier in and out of possession at times, but we only worked on it for 15-20 minutes yesterday [Monday], so it is lads coming in from the 18s, first team pros, and it is kind of thrown together.

“In terms of attitude, for the first 30 minutes I thought it was brilliant, then we dropped off a bit. And then we got it going again in the second half.

“You want to win any game and we came out winners, so that’s pleasing. There was some really good stuff, and some disappointing stuff, but a lot to take from it.

“It’s important they get games, and we’re always looking for games to keep them ticking over.”

On chances created, he commented: “We hit the woodwork a couple of times. To be fair to the keeper he has made two or three really good saves.

“The lads were saying one of the headers was over the line, it doesn’t matter, we’ve won so you’re not bothered. We’ve created some good opportunities.

“You want to be clinical with that final pass in the final third, just played to the wrong person, or it gets blocked, or goes out of play, or just overweighted it, or set someone up with a better opportunity. 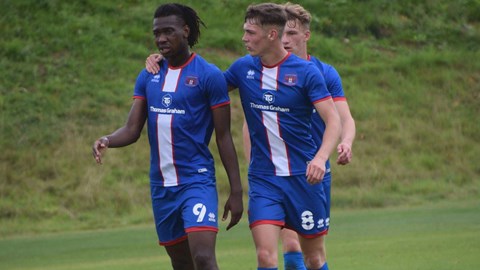 GALLERY: Images from the Central League Cup game against Fleetwood

“But there were a lot of shots on goal and if you’re watching as a neutral, it’s one you could say could have gone either way, so we’re glad to come out on the right side of it.

“It was competitive, had a couple of bookings and a couple of tackles. You can train all you want but it’s a full-size pitch and you’ve got to track runners, forward runs, crosses and it replicates what you want to see to get in the first team. It’s vitally important.”

And on the goals scored by Brad Young and Manny Mampala, he told us: “Brad was desperate to get one. I told him he should have squared to Taylor for his goal and he said in a first-team game he would have.

“He must be on a goal bonus for the reserves! He took it really well, and he was sharp on Saturday when he came on, at Crawley, I thought he had a bit of an impact.

“I’m really looking forward to seeing him in more game time, and it’s really important he scores goals in these games and continues to train well.

“Manny wanted his goal as well. He struck it well and he knows what’s expected. Again, it’s important, because these lads want the pitch time.

“We always say there’s different reasons for players needing to be out there. Some are topping up their fitness, some haven’t played as much as they’d like and are trying to get in the first team plans.

“There are young lads trying to get contracts, young pros trying to get in that match day squad. It’s important they all show good application, which they did, certainly in the first 30 minutes and then the last 30 minutes, and that’s why they probably won the game.”

With the game being played at a good pace, it was another good run-out for the squad as a whole.

“Like I say, it’s good for them all,” he reiterated. “Keelan got plenty of the ball and Jonathan, that was his first game with us. It’s interesting for him, he’s had a good look at League Two football now.

“I’ve been speaking to him a lot. It’s different from 23s, he’s trained hard, got 90 minutes today and he’ll feel good for that.

“He’s comfortable, if you’re coming from Arsenal you’re going to be comfortable on the ball. It was good to have a look at him and we’ll see where it goes from there.

“Right through the team, they all got value from it. Young Scott in goal will learn from a few things, distribution, and he made a couple of good saves. These games, it’s always learning, there’s no pressure like there is in the first team, you learn from it and you can reflect on a lot of things.

“It’s like Gime, he worked hard. He just needs that end product, he does great, brilliant technically on the ball, he just needs to hit the target or have an assist.”

United’s success in the group stages last season set the foundation for a runt to the final, which was held at the national training centre.

“We’re on the road to St George’s again!” he joked. “It is nice and when you’re in it you want to do well in it. For the younger pros especially, it was good last year to get on a run like that, and getting through gives us more games.

“We’ve started well with a home win, and hopefully we can kick on when we play Preston and Morecambe.”