Youth boss Mark Birch gave us his reaction to the hard-working home win over Shrewsbury Town shortly after full-time on Friday afternoon. 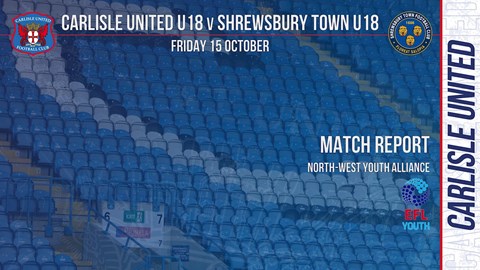 “It was a win we think we deserved because the lads worked really hard from the first minute and all the way through,” he said. “It’s credit to both sides because it was a great game in terms of what youth football can be about.

“It was competitive, it was aggressive, but there was a lot of good football on show as well. There was a real will to win and a desire to perform, and it was just a good game of football.

“The game started well for us even though sometimes you can think that you’ve scored too early. To be fair to the lads they went on to create the better of the chances over the rest of the 90 minutes.

“There were parts of the game where we didn’t have it our own way, but the lads concentrated, they defended as a unit and they did what was needed to get themselves back on top.

“They kept closing every ball and I can’t give them enough credit for that performance.”

“Shrewsbury are probably the best side we’ve played so far this season,” he continued. “The really pleasing thing was that we didn’t let them get a clear-cut chance on goal and that’s good for what was, if we’re being honest, a makeshift back four. 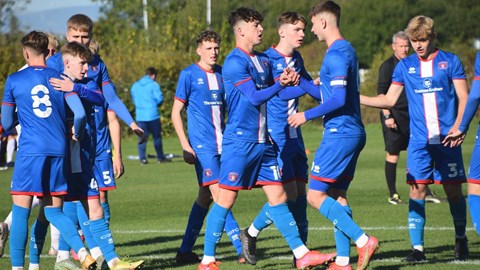 GALLERY: Images from the youth victory over Shrewsbury

"They listened to what we wanted from them , they did the right things at the right times, and they played percentage football. A lot of times when you do that you come out on top.

“Add the resilience that we saw to that and you give yourself a real chance of winning. The challenges were strong, the purpose in the tackle and the passing was there, and they put a huge amount of effort into everything they did.

“It was a demonstration of the good spirit we have in this group. The lads train all week to get three points when they play on a weekend and they don’t want to let that go easily.

“We want to take them to the next level of football, and part of that is knowing what to do when there are periods of games that aren’t going their way.

“Everybody loves the games where you win by four or five, but that can’t always be the way. Sometimes you have to do the tough and ugly stuff, and they’ve shown with this that they understand that.

“The key for them now is to understand that they’ve done this in this way, and well done for that, but it’s already gone.

“That’s another reality of football. Enjoy the win, but immediately start to think about the next game and how you can be even better. It’s the players and teams who do that who then go on to enjoy consistency and the success that brings with it.

“They’re now in on Saturday morning, when they could otherwise have gone home, and they’ll cool down and train together. From there they’ll be in to watch the first team on Saturday afternoon, because we’re all in this together.

“The first team staff came to watch our game, so let’s support them as they go on to do their bit.”