United’s home game against Forest Green last weekend saw the Blues start at a high tempo, with a string of chances going begging through what was a strong opening half hour.

MANAGER: It shows the type of player he is

Had one of those opportunities gone in, the outcome could very well have been different, and manager Chris Beech confirmed this week that he’s used that as a learning point as the focus switches to the Memorial Stadium on Saturday.

“If you can put an opponent on the back foot and get your noses in front with a goal it changes a lot things within the game itself,” he said.

“What we didn’t do against Forest Green was get the first goal when we were the team in the ascendency at that time. There was ample opportunity for us to do that and we could quite easily have been two or three goals up before they scored.

“The goal didn’t come and because of that you have to make sure you stay strong in the defensive elements of your game, and particularly with one of the fundamentals of League Two football, which is set pieces.” 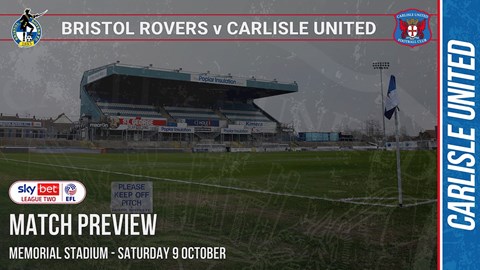 “Us not getting our goal against Forest Green adds to their confidence when it comes their way,” he added. “There’s a lot of learning taking place amongst us, we had two debutants last week, and they will have taken a lot from it.

“But we must remember that we need to move forward and build as they get these experiences that they can learn and grow from. That’s just where it is.

“The first goal is always important and clean sheets are obviously a good foundation for everything else you want to do.

“There needs to be balance in your play, especially when you’re playing away, but the most important factor is to make sure that you’re on your game.

“Within that individuals need to make good, positive decisions and they need to work together and show cohesion in their approach.

“Whether they’re attacking as a unit, working hard to get the ball back, passing and moving to create space or backing each other up, it all has to be done as one.

“All of those elements have been there in recent games but we’ve got to move on from that point and remain strong mentally.

“Playing in that way will definitely support positive results and we’ve got to make sure we turn up on the most important day of the week, which is always match day.”

“We’re in a sport that’s pretty ruthless and we have to make sure that we build on the good things we do,” he concluded. “Those things are never valued unless you’re getting three points more often than not.

“At the moment we need to get into our rhythm and grow the relationships within the team we send out to play.

“We have kept a core together, and there were other players I wanted to keep who have moved on, but there are still new relationships being made.

“They need to grow quickly, which they will, and we’ll be all the better for it.”