United’s match winning goal was a fourth of the season for Tristan Abrahams, and it proved to be just what the home crowd needed on a cold, wintry afternoon with the late volley enough to seal a deserved victory amidst loud celebrations. 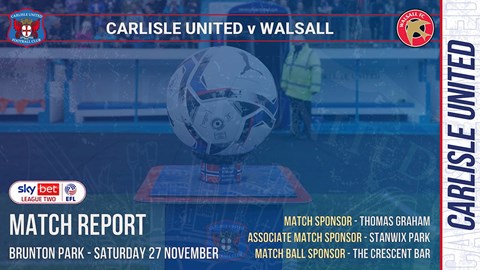 And boss Keith Millen revealed afterwards that the crisp volley had earned the delighted forward a reward, courtesy of Fantails in Wetheral.

“It’s funny because I’ve met somebody recently that gave me a voucher for a restaurant, for a meal for two, for the player who scored the first goal,” he explained. “I said to the lads that whoever got that goal had a dinner for two – it’s at Fantails, which is a lovely restaurant – and a bottle of champagne.

“I did tell them that the downside of it is that I’m going with them, so I’ve handed the voucher to Tris and I’ve asked him what time we’re meeting.

“I’ve said to Tristan that the one thing he can do is work hard, and he’s powerful, so the minimum he has to do is use that and put as much effort in as he can. Hopefully the chances will come his way off that.

“What has frustrated him and me is that for all the work he’s done he hasn’t had that many chances. Brad has had things drop to him, which haven’t been finished, and my concern with Tris was that he was working so hard, but things just weren’t going his way. 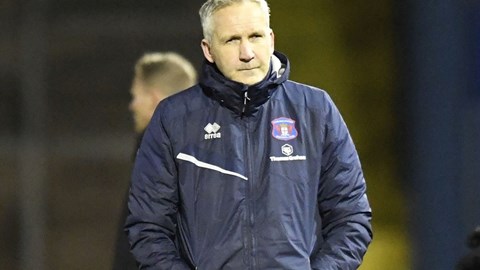 MANAGER: It's one where we competed well

“Sometimes it’s getting the balance of thinking about whether or not you’re running around too much, and do you need to change your game a little bit to get into those dangerous areas.

“He was in the right place at the right time and if you keep doing that the chances will come, as will the goals.”

“I’m really pleased for him, because he has worked so hard in the last few games and not got his reward,” he continued. “For him to get that goal, it’s great for him, you could see the response of the lads that are pleased for him, and the fans – the fans are relieved and pleased he scored his goal.

“We need our forwards to score goals. We need others to pitch in, but if your centre forwards are scoring goals, they’re playing with confidence, and that’s what we’ve not had.

“Tristan hasn’t had a lot of chances, for all his hard work, but today coming on fresh, I don’t know if it had any bearing on it, but he was where he needed to be when the chance came.

“It’ll do him the world of good because probably more than any other position the confidence side of it matters. You know how important that is and it affects you, and you’ve got to be very strong mentally. 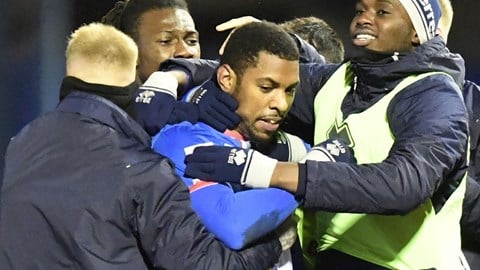 GALLERY: The Walsall game in pictures

“All forwards go through barren spells, but the good ones don’t let it bother them, they just go again, and when the next chance comes they finish it. I’m delighted for him and the team.”

And for striker Sam Fishburn it’s been quite the birthday week to remember with celebrations on turning 18 on Friday quickly followed by a first start for the club on Saturday afternoon.

With his first professional contract already signed, his involvement with the first team squad comes as he continues to work hard to complete his scholarship, which is now into the final months of its second year.

His place in the starting eleven paired him up front with fellow 18-year-old Brad Young, who has three goals from his 17 loan appearances from Aston Villa this term.

“We know how hard Brad works and he’s really keen to do well,” manager Keith Millen said. “Walsall’s centre backs are really big so it was a bit of a rude awakening for him at times up against them.

“It’s something he’s going to have to deal with. He’s still a young lad and he wants to learn, and that kind of experience will do him good.

“Sam competed and I thought he was excellent. I was hoping Sam might have got the goal because his birthday was Friday and he’s obviously old enough to drink champagne now. It would have been quite nice for him to have got that voucher.

“It didn’t matter who scored the goal, but he competed. He’s a young lad when you see him around the place but when he goes onto the pitch he looks like a man. That’s what I like about him.

“He battles, he holds his own and he’s a real handful. He has such a bright future if he keeps working hard. I was really pleased for him.”