United won their second game in the space of four days with another clean sheet and two very well taken goals at the Mazuma Stadium on Tuesday night, and manager Keith Millen admitted afterwards that he was more than pleased with what had been a disciplined performance against a good League One side.

“Delighted, really delighted,” he said shortly after the full time whistle had blown. “I’m feeling proud, actually, because a lot of those lads haven’t had much game time and there were some tired legs at the end.

“We looked at the opposition and they played almost their strongest team, with some internationals missing, so when we saw the team sheet it was a bit of a surprise.

“I said to the lads before the game that it was a challenge for them, and some of the players who I haven’t seen play have done themselves a lot of good today. I’m pleased with their attitude towards the game.”

The discipline of a solid first 45 minutes was enhanced after the break with a freedom in the attacking play that led to two well deserved and well taken goals.

“I said to the players at half time that we could rest in possession, and what I mean by that is that when we have the ball, we can look after it and take some rest,” he explained. “You can’t keep running and turning teams, then they do it to you, no team can do that for 90 minutes.

“There has to be periods in the game where hopefully you have the ball, and that means the other team can’t score. But I want to be careful that I don’t say that to them, and we end up passing for the sake of passing. 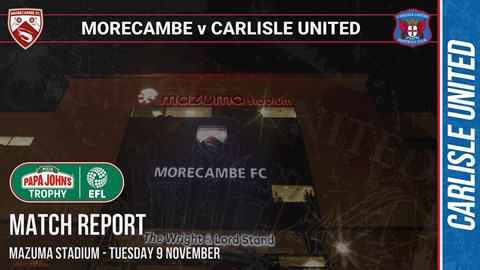 “What we’ve done well is that we’ve turned teams, we’ve moved teams and we’ve got an understanding of what we want to do. It’s getting that balance of when to turn teams and sometimes there might be times when we can keep the ball for a few passes and then turn them again.

“That’s an aspect where we need to get the balance right. The thing that pleased me most, and again I said this at half time, was that there were two or three 50:50 tackles, like proper old fashioned tackles, and we won them. That shows me a team that’s fighting and wants to win.

“It matters to us, as a team, that we do that because the people who watch us will think, yeah, they’re at it, they want to win for us.

“Rather than feeling sorry for ourselves, as we did at Northampton, which I understand, and I’m not thinking we’ve cracked it by any means, just because of two good performances and two good results, but there are good signs there.

“I asked the lads after the game why we’ve just won two games, and they came up with a lot of reasons, but the main one was that there’s a structure to what we’re doing. If we defend strong as a team, as we saw tonight, then even a good team can’t score against you.”

And the goals, of course, came from the all-important set piece type situation.

“It doesn’t matter what level you come in at, set pieces can win you the game or lose you the game,” he commented. “It was a fantastic free kick from Jordan Gibson, a little bit of quality, and that’s what you want to see.

“Kelvin Mellor got his goal from the second ball, and that’s because we work at it. We go through it in our meetings and on the training pitch, so none of this is off the cuff. There’s a reason why it works - it’s because you work hard at it.

“We knew it would be a tough game, Morecambe had that strong side out, and the manner of the performance really pleased me from many aspects. I thought we competed really well, and as the game went on we had a bit of composure about us and moved the ball.

“The icing on the cake was the free-kick, great bit of quality, and the second goal killed the game, really.”

“Obviously we finished top so that means a home tie in the next round,” he concluded. “I’m not sure the groundsman will be too happy, because we’ve got a lot of home games coming up, but we’ve won and we can look forward to the draw on Saturday.

“But, the nature of this game means that our minds are already on Barrow. The players have just gone out to do a recovery session now because we’ve got to focus on Saturday, that’s just the way it is.”