Ticket sales have the attendance for tomorrow’s visit of Barrow already north of 6,000, with fans being urged to buy in advance of match day if at all possible, for the 1pm Saturday afternoon kick off. 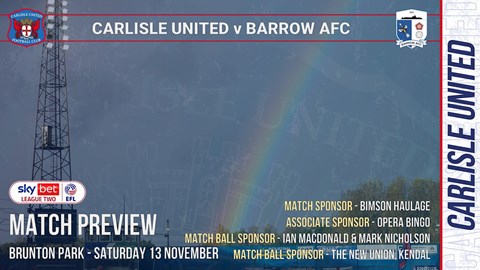 Speaking ahead of his Cumbrian derby, manager Keith Millen said: “We’ve spoken to the players in our meetings about the need to understand what’s at stake on Saturday.

“Yes, it’s only three points, but the reasons are there for it being important. It’s a local derby that hasn’t had fans at it for a while, there’s going to be a good atmosphere, a good crowd, so it’s one to really look forward to.

“Especially on the back of two wins, those are the sort of games you really want. You’ve got to enjoy the atmosphere that’s going to be created, but also understand how much it means to the supporters. I’ll make sure that over the next day that the players realise that.”

“Normally in these sort of games, early on, you don’t want to give away any sort of momentum or silly mistakes,” he continued. “Nerves are there, you want to try and ease your way into the game, and I want us to show our identity again. 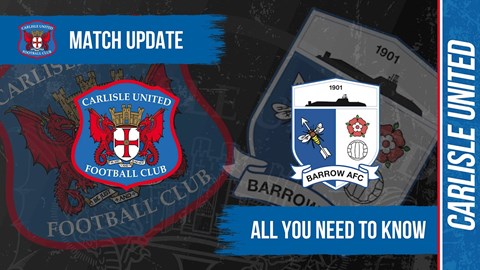 “That’s what’s pleased me most the last two games, that you can see what we’re trying to do. It’s not always perfect, but at least they’re getting an understanding of how we want to defend.

“We need to respect Barrow, we’ve done all the work we need to do on them. It’s a case of dealing with what they can do, and the occasion, but also being confident enough to play our game, because at the moment our game is looking dangerous and effective.”

On what we can expect from a visiting team that has also enjoyed back-to-back victories, he told us: “I think it’ll be a battle, certainly early on. That’s something we have to be ready for.

“That’s something in a local derby that is a given, that we have to fight for everything we get, and I’m sure they’ll be saying the same thing. I know Mark Cooper, from my Bristol days, he had a good time and success at Forest Green.

“Similar to us they’ve been on a poor run in the league and have had two good cup results. I would imagine they’re feeling a little bit more confident. I’m expecting a tough game but one hopefully we can eventually try and control with the way we want to play. 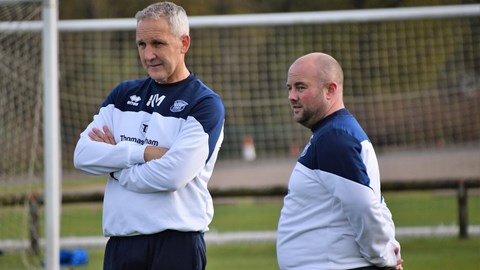 “It’s a game I think both teams will be looking forward to. There’s an extra edge to it, but I just want to keep seeing signs of improvement.

“When we’ve watched the last two performances back I’ve told the players to make sure they see and understand why they’ve been doing things better. It’s no fluke, it’s from things we’re doing in training every day and they’re then taking it into their games.

“The more you do it the better you become at it.”

Another given on the day is that both sets of fans will be up for it as they look to back their respective teams to glory.

“That’s normally the case, the home and away fans start having a go at each other, two sets of supporters, and I think that will help create an atmosphere,” he said. “I want the fans to enjoy watching their team.

“They only really enjoy it if they see the players fighting for the club, that’s something you have to do, and then hopefully we’ll have enough quality to try and win the game. If the players are committed I’m sure all the fans will be going home very happy.

“I’ve been involved in a lot of different derby games, I personally loved the occasions. These games are what you work hard for in your career. I’m sure the players would always prefer a bigger crowd to play in front of, and I’m sure it will be a lot noisier.

“For me, it has to inspire them to go and enjoy the occasion. It’s the chance for someone to become a bit of a local hero if they can go and score the winning goal. There’s no fear involved, it’s more about an opportunity to go and make the headlines.”

“That’s the key thing for me, I just want them to enjoy the occasion,” he told us. “These are the days you look forward to in your career so you can’t be apprehensive about it.

“We spoke about the FA Cup last weekend and how there might be pressure because everybody expected us to beat Horsham, but these games give you an opportunity. In that case we know if we can go through against Shrewsbury we could get a big club in round three, you could be on telly or you could grab the winning goal.

“You have to embrace all of that, not shy away from it. When I look back at my career it’s the derby games and the cup finals and cup games that you remember.

“Hopefully the players look at the opportunities they get, like this game on Saturday, and they’ll view it in the same way. And, of course, every game is the next one where you can go out and produce your best game, and every player should want that.”