Carlisle United’s Community Sports Trust used this week’s second Get Set, Go session as part of the Mental Health Awareness Week 2021 activity which is encouraging clubs, players, fans, participants, local communities and stakeholders to do a ‘Mile For Mind’ to help raise awareness of mental health issues, at the same time as asking people to donate much-needed funds to support the Mind Charity.

And there was also a special treat for the Mental Health Group who got to play a game of football on the renowned and award-winning Brunton Park pitch as a competitive backdrop to the Mile For Mind walk.

CST's assistant manager James Tose said: "When we asked the Get Set, Go group if they would like to take part in the Mile For Mind activity they jumped at the chance.

"They're a group we're really proud of because it's one of those which is growing and developing all the time.

"The aim is to try to reach out to people who, in some cases, perhaps wouldn't normally even leave the house for these types of activities.

"We focus on wellbeing and on positive social activities, as well as helping people to get invested in keeping themselves feeling healthy and happy.

"We've been going for about 24 weeks now and, like I say, it's a project we're very pleased with.

"Doing the Mile For Mind challenge is another example of how proactive the group is, and it's a big well done to them for taking part."

The Get Set, Go group were joined by club staff, families and friends as they took on the five-lap challenge.

Meanwhile, out on the green stuff, CST manager John Halpin had some serious refereeing to do.

"For us there is no better way of helping to raise awareness of Mental Health Week than by getting our Mental Health group out onto the main pitch for a game of football," he said. 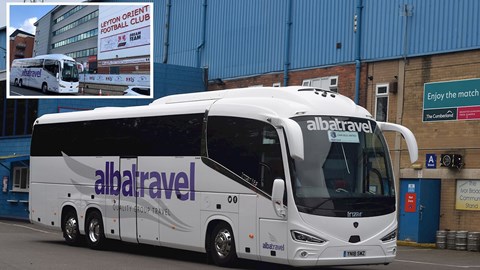 "It can't be overstated as to how much doing something like this has raised the spirits of the lads and lasses involved. It's even better with everybody knowing that it's part of a bigger, national drive to help to promote the work the EFL and Mind do, and it also highlights just how active we are as a Community Trust and as a club in these areas.

"What we have to remember is that some of our group members are vulnerable, and 15-months of lockdown has been really hard for them. Some of them rely on their twice-weekly sessions with us to get the social interaction they need, and it's magnificent to be able to do something special like this with them.

"Hopefully, with restrictions lifting, we'll be back to normal soon, because it's groups like ours who get the full benefit of being able to meet up, kick a ball about and get some enjoyable exercise.

"I'd like to say well done and thank you to everybody who has taken part in the Mile For Mind and Mental Health football session. They've helped us to raise profiles during this important Mental Health Awareness Week.

"And importantly, and I don't mind repeating this, the obvious benefits of getting together and seeing each other in person had the added element of a little bit of a physical challenge, and we all know the feelings of positivity and wellbeing that can bring.

“We saw a lot of smiles and I think the opportunity to get so close to the playing surface brought another element of excitement.

“We’re already proud of the participants of this group, and in the way they embrace the work they do with us, and I’d like to go on record with a ‘well done’ to everyone for completing the ‘Mile for Mind’ challenge and for putting on such a decent game of football.”

With one in four of us experiencing mental health problems each year, we are asking for every person taking part in ‘Mile for Mind’ to nominate a further three friends, family members or colleagues to join in.

Nominations can be made on social media using the hashtag #MileForMind.

Any donations to Mind – no matter how big or small – can be made via Just Giving.