Defender Aaron Hayden was one of eight players to have clauses activated ahead of the end of the season which keeps them at the club for the coming campaign. 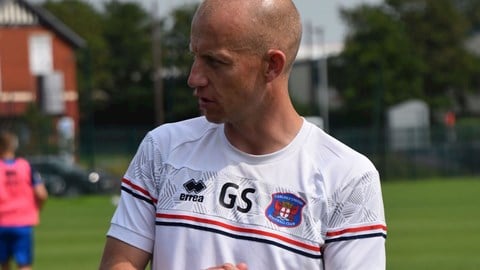 The popular centre back has established himself as a regular starter since the arrival of Chris Beech at the back end of 2019 with eight goals from his 73 appearances for the Blues so far.

A tight hamstring picked up in the warm-up for the season-closer against Walsall 10 days ago left him one shy of 50 outings for last term alone – a season when he picked up the role of vice-captain and, on occasions, the captain’s armband as he took added responsibility in his stride.

With the off-season now one week old, we caught up with him to see if he’d had an opportunity to relax following what had been a gruelling schedule of fixtures.

“It still feels strange not to be playing games,” he admitted. “It feels good to get some rest in the legs and it’s made me realise just how intense the last few months were.

“Now that I haven’t done anything for a week, my body feels brand new already, so I can only imagine how I’ll feel in another month or so. It was a really tough period with all of the games we played so I’m really relieved to be able to get some rest at the moment.

“It’s all about making sure I’m raring to go in pre-season from now on. I haven’t done anything since the end of the season, I’ll let my body full recover for another week or so then slowly start to build myself back up.”

But as with every player, there’s bound to come a point when the boots start to call out from the hallway and the itch to get back out there returns.

“I think I’ll start missing it after a few weeks, but it’s important for me to enjoy the time with my family,” he told us. “Once the season starts you’re up and down the motorway and you miss a lot of family time, it can get quite hectic, so I’m just going to take a step back and enjoy my daughter.

“If Boris allows us to go on holiday, hopefully I’ll do that as well. It’s weird, adrenaline doesn’t just get you through the actual games, it starts to lift you up as you’re coming up to a game day as well. I always feel really focused in the lead-up to playing.

“I’ll be honest, now that we’re having time off it’s like my body thinks I should be doing something on a Tuesday and Saturday. It’s weird to not have that stimulation of a game day to release that energy.”

He’s spoken a number of times before about the honour of being appointed as the club’s vice-captain, and that was complemented at various stages throughout the year when he was charged with leading the team and taking the armband.

“With being given that responsibility by the manager I’ve learned a huge amount, if I’m being honest,” he revealed. “It’s actually one of the main things I’ve learned this season because I always knew I was a leader, but when you actually have the armband on your bicep you realise that you’re the man who has to take the responsibility.

“There have been situations this year where I’ve had to take the armband off Nick and step up, but I’ve relished it. I think it’s helped my game and when I’m given the armband, I do feel that extra energy. It’s a good thing and, like I say, I’ve learned this year that I really am a leader.

“You do wonder how the boys will react when you get it, but they’ve been brilliant with me. It’s a great bunch of lads who all want the same thing, so I think we’re bound to pull together, whatever the situation.

“On a personal level it means a lot to know the manager has faith in me. Two seasons ago, at the end of 2019 season before I came to Carlisle, I was out of contract at Wolverhampton and it’s similar to the pandemic with that feeling of uncertainty and not knowing what is going to happen next.

“It’s quite an anxious place to be, so going into this off-season knowing that I’m going to be here next year is massive. It means I have somewhere to play my football and show what I can do.

“It’s really relaxing for me mentally and it’s helping my body to relax as well. I know I can afford to have a few weeks off, totally switch off, and then I can pick it straight back up as I get ready going into next season with a club I really want to do well for.

“Of course there are things going on with new contracts and new players coming in, and things like that, but it’s all about next season now. I totally switch off from everything, if I can. I know I need to recharge the batteries, so that’s what I’ll be doing.”

We'll have more from Aaron Hayden on the official website on Thursday morning.