With the dust now starting to settle on the 2020/21 season the management and coaching staff will, no doubt, head into a period of reflection alongside, of course, making sure that preparations for the new campaign, which will be on us very quickly, are full steam ahead.

And having just been through and experienced a season like no other, with a myriad of unexpected challenges thrown up along the way, there must also be the need for the group as a collective to try to switch off, particularly after the intense 11-week spell of constant back-to-back games.

“When you’ve been at it full throttle it becomes a time when you need to wind down, but it does take a little while to switch off,” assistant boss Gav Skelton revealed. “There’s been so much going on that you do think about things and you still have all of that in your mind.

“Having said that, it did feel strange last week not to have had to prepare on the Sunday and Monday for a game on Tuesday night. That actually felt really unusual after what we’d just been through.

“It was a novelty to have a bit more time on our hands to look at the Saturday game against Walsall, but I’m sure I’ll start to switch off more as the days go by.”

“Something else I noticed was that even though it was so busy over the last few months I never felt tired through it at all,” he added. “The adrenalin keeps you going and you enjoy it, to be honest.

“That’s why I’ll probably have a bit of a crash over the next few weeks, but it will also feel like something is missing. Mind you, I won’t have that much time on my hands with having a young family, but football does bring the buzz of highs and lows, and obviously that won’t be there.” 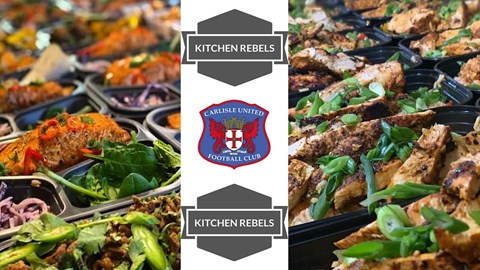 Be it weather, covid, postponements or abandonments, the season threw all kinds of obstacles that had to be negotiated, often at the drop of a hat.

“I think the real reflection on all of that will come over the next two or three weeks,” he commented. “There’s still a lot we’re working on looking ahead to next season, but we will definitely have lessons learned once we do sit back and reflect.

“We know we went through that difficult period for results, which will have things we can take from it as well, and the important thing is that we use all of it to help us to push on again when we get back together in the summer.

“You have to do that if you want to be better and successful. We can’t deny it, and there’s no need for us to, but some of it was tough. We had a really difficult run of games when it didn’t go well and we had to dig really deep.

“To bounce back like the lads did, they have to take credit for losing just one from the last 11 games. We were very hard to beat, and that’s a good trait. I know we wanted to win more, but to bounce back with a group of young lads who hadn’t experienced anything like that before, credit goes to them.

“We accept the criticism that comes for that poor run of results, of course we do, but the players deserve great credit for coming back and maintaining some good form and for giving us some positive performances.”

Picking up on that point, and with many of the lads having played a high number of consecutive games on the bounce for the first time in their careers, we wondered how important that will be as they get ready to go again next term.

“We could almost go through the whole team, couldn’t we, because that’s the case for most of these lads,” he said. “The likes of Jack Armer, he’s half a season in, he’ll be better for that next year.

“George Tanner has experienced ups and downs, Joe Riley the same … it’s just really valuable for them and for us. They’ll be able to look back at this and they’ll know how to, if they’re not at their best and possibly getting a 5/10 for their performance, find more and make it a 6 or 7/10.

“Even if you’re not at it or it’s not going your way, you can still be a value to the team. They’ll all have seen how that’s the case from how this season went.

“They’ll definitely know more about game management, and what’s needed for that. They’ll pick up on it more in games when they maybe have to slow it down, when they take an extra touch, take extra responsibility to get on the ball, when you speak to your team, speak to the ref to get certain decisions, that’s all just managing a game.”

On the year as a whole, he told us: “I’ve never experienced anything like it and I do have a lot of people telling me that I must be ready for a rest. In a strange way I’ve really enjoyed it because it’s a job I love.

“I would never moan about anything because it is a fantastic job to be doing. Was it ideal – probably not, but it is what it is and you’ve just got to get on with it.

“Hopefully we’ll be back to normal but you never know what’s around the corner. Touching wood it’ll never happen again, but it is an experience and you’ve got to make sure you can take things from it.

“I’m sure things will go against us at times next season, that’s life, but you have to learn as you deal with it, or draw from what you’ve been through previously to help with that as well.

“You don’t know what the next challenges are going to be. That’s why we love football. You always have to be ready. Don’t completely leave it behind you, learn from it. In probably five or six years you’ll probably look back and think how crazy it is, but right now we’re all caught up in the moment.”