It felt like Saturday afternoon at Stevenage was one of those afternoons where everything that could go wrong, did go wrong, but manager Chris Beech was much more pragmatic in his assessment as he talked about the disappointment of the result balanced against the difficulty of being reduced to ten men so early in the day. 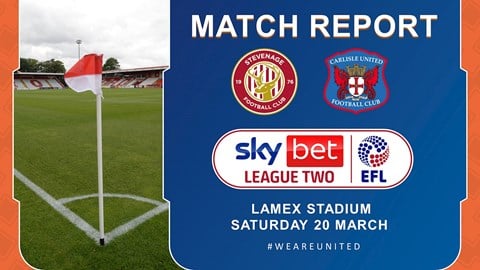 “The scoreline and red card suggests that things that could go wrong did, but what we did do was concede ground on the sending off and then concede more ground from a set play, which I don’t think they’ve worked on.

“It was a great goal but off the cuff, I think. They get the first goal but for us to then play with 10 men and do our utmost to get back in the game, that was commendable.

“But we have to accept that we needed to hold on after that point for long enough to put some psychology, anxiety and tension in their team. Going behind again just five minutes after we’d got back into it, it’s a stomach blow to you, if you’re Carlisle, and an elation to them because they’ve been able to get back off the canvas before they’ve been put in an even more awkward position.

“If we’d managed to hold on longer, I think it would have made a big difference to the game. And, of course, we almost got the best start to the game you could have wanted.

“George Tanner has a shot blocked, he crosses the rebound, and Gime looked like he was going to head it in. It’s gone over the bar, and we had a few other good chances as well.

“It’s always going to be difficult to attack in the way you want with a man down, but we still have to manage the game better in that situation.”

On the sending off, which came after just 18 minutes, he said: “It was a straight ball and a straight run, and I did talk to Rod about being aware, because the ball was rolling on to the keeper.

“The attacker wasn’t necessarily going to get it, so we’re talking about actions and outcomes. I don’t think it was a definite goal scoring opportunity, because Magnus had the ball, but I also don’t think it’s a decision we’ll be able to turn over.

“Stevenage had a box midfield, so losing Rod meant we had to consider that. We switched to two banks of four with Ozzy trying to occupy their defenders, but that was a tough ask for him on his own.

“We’d sacrificed Gime, a substitution we possibly didn’t have to make, but we definitely needed someone at that time of the game to make sure the back four was balanced, so we looked to Aaron for that. They were playing two strikers, so that decision was the correct one.

“Our new shape of 4-4-1 worked well in moments but, like I say, we’ve allowed their scoring moments to come too easily. I must say I wish we got more in terms of parity with decision making, because we had a turnover when our player definitely gets dragged, but he doesn’t even get a yellow.

“I don’t want to go there on that, we’ve been beaten and we now need to look forward to the next game we can do something good with.”

“Rod is unhappy with himself, of course he is,” he added. “Everyone is unhappy because we’ve been beaten. We win together and lose together, but we have to make sure we learn quickly from this. 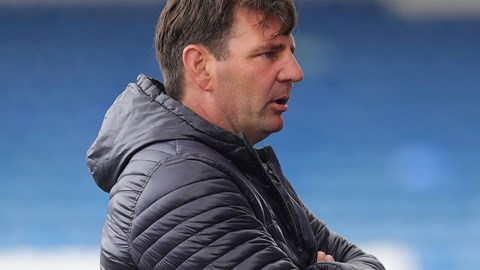 MANAGER: Hopefully it's not as bad as it looks

“We still have a fighting chance to win games and we have 13 of them left. We need to make sure we do our utmost to make sure we’re right at it for those fixtures.

“What I will say is that we want to be talking about winning games. That’s the way I want to live my life and career.

“It’s probably not the right time to talk about the longevity of our year, the turnover of players and difference and the way we’ve been able to play football; we’ve been put in a major headlock type car crash to us, which wasn’t our doing, and what we need to do is play as well as we know we can going forward.

“You have to be gritty and gutsy, this is what League Two demands, and we have to play a bit of football with that as well. We want to be on the right side of three points as much as possible.”

“There’s been too many days where we’ve talked about no lack of effort, but we haven’t got anything to show for it,” he continued. “We’ve had a period when we’ve been leading in games but not winning them.

“So you have days like today and like the Morecambe game, it does happen, you have no divine right to win any game, but you have to find a way.”

And speaking more about the changes made to help with the search for a positive outcome, he commented: “We made our changes to try to gain a different kind of approach, and you can argue whether or not those changes are the right ones to make. That’s always the beauty of hindsight.

“The big period of this game was after we scored. We needed to go longer than five minutes, but we didn’t. Maybe our equaliser was scruffy, but it’s a willing runner in Brennan as he came back inside to shoot. We needed to build on that moment, and we didn’t.

“I’ve said it a few times now, but we conceded too easily. The first goal, it’s freaky, the lad has got in the way, touched it, volleyed it and it’s become an excellent finish.

“There’s no way they’ve practiced that, or if they have, they should be in the Champions League. It’s one of those things. The second goal we should be stronger in the middle part of the pitch, we have chances to clear it before it goes back to the player who scores.

“Those are the bits we can control, we can’t control the excellent outside of the foot volley. But we can control whether he’s in the position to get that. I thought we could get tighter and you could actually say that they haven’t had to move, particularly the lad for the finish.

“We haven’t cleared it cleanly on a couple of occasions then there’s suddenly a volley that hits the bottom corner. They were two quality strikes but it’s disappointing that we allowed them to happen too easily. For them to get back ahead with the first attack after we scored isn’t good enough, and we need to look at where we could have been better within that.

“We scored against a team that hasn’t conceded, but ultimately we lost the game. We showed a great attitude to get back in the game and the players did what they could to get something from it at that point.

“As a manager you look to see how you can help them to get back into it, without conceding more as you do that. It’s difficult when you factor that you only have ten men to make the correct decisions to support their effort.

“I have let the lads know I’m frustrated, but it’s gone, we have to make sure we learn from it, and we have to understand why we’re in this position we’re in now, and why what has happened to us has happened.

“We need to keep things in context and we have to make sure we step up and step forward. That’s what we’ll be focusing on for the game on Tuesday.”