Saturday brings one of the shortest hops of the season as the Blues head to the seaside and Morecambe for a game that is generally classed as a ‘derby’ fixture. 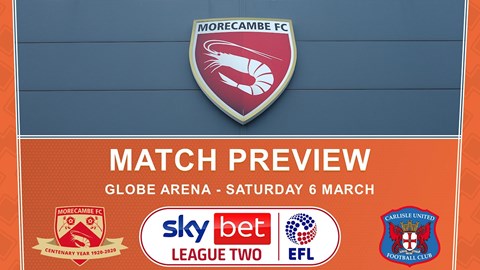 Speaking ahead of the weekend encounter, Chris Beech said: “I’m really looking forward to playing against somebody that’s playing really well at the moment.

“It’s going to be a tough task but they all are in League Two. We’ve been very competitive and striving to win games, and we need that to continue.

“If you look at the detail of games we haven’t got what we wanted, but we are leading in five of the six fixtures and we need to make sure we understand when we get up to full tilt, the traits will look after us, because we’ve done very well up to a point.

“But it doesn’t matter what you say if you don’t get a win, it’s all about winning. Football – everything else is classed as an excuse, so the less I speak about it the better probably.”

On the job done by Derek Adams since he took over in November 2019, he told us: “I think he’s done very well and he deserves accolades and credits. They and we are very similar in many ways.

“We speak to many similar players who are out of contract, the finances will be very similar, so the locality of the clubs, you do a deal with players that can sign for either club, it’s quite a competitive situation in the summer to sign players and things like that.

“Every game’s an opportunity to win but there are no guarantees of anything, winning or losing. You have to make sure you understand the opposition’s strengths and you get your players doing what they’re good at, that’s what we’re looking to catch up on.

But what can we expect from an opposition that has found a real streak of confidence?

“They’ve had various formations,” he explained. “They’ve done unbelievably great, of course they have. They’ve dealt with a lot of stuff off the pitch as well.

“I think Derek and his staff have done a tremendous job. Well done to them for that. But in terms of their style of football, they score good, quick counter-attacking type goals. They do have somebody up front who they can utilise and play off, and they have very interchangeable and attacking-minded players that play just behind him.

“They then have two very strong midfield players behind those three that look to head, win, tackle, and support and add value on set plays for and against. In terms of organisation, they’re strong and they have players who are in good rhythm.

“We will have a fight on our hands, but we would anyway. The biggest fight is to make sure we don’t fight ourselves. Because that will look after us if we can adhere to our traits.”

And looking back at Tuesday’s first appearance for the club for Cedwyn Scott, he commented: “He didn’t get in the game, that’s for sure, but if you don’t give opportunity, everything’s up there for grabs in terms of an opinion.

“It’s up to the players to say it’s them. I will be very aware of giving people opportunity, but we have to make sure it has value. Cedwyn, he’s done very well to get that. All the players have opportunity here and all of them will definitely give their best to their opportunities they get.”