The quick turnaround of fixtures continues as Grimsby come to Carlisle tonight, with both teams facing another game where a win is important for different reasons. 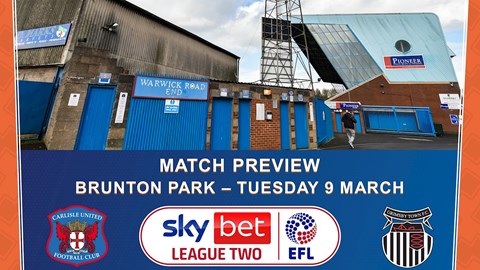 Speaking about the game, United boss Chris Beech said: “I want us to work hard and get back to doing what we know we can do, and every game is an opportunity for us to do just that.

“I think it’s irrelevant where any opponent is in the league. Every game’s an opportunity but the league table is irrelevant once you’re on the pitch. The team that does things properly is the one that gives itself the best chance of taking the points.

“In recent games we’ve had spells, sometimes long spells, where we’ve played well. But the fact is we haven’t won games. The past is the past and it almost becomes pointless talking about it.

“Yes, we have to learn from it, but we must dress ourselves down, work very hard and get back to doing the things that represent all of us well.”

“The players are in an earthquake, and what they need to do is stabilise,” he continued. “That’s where they are and they’ve never been in one before. Like anything in life, I suppose, when it happens first time round you learn a lot more at that point.

“They definitely have to work very hard to make sure they have a clean mind and commitment to making things better.

“And they have to stick together. If they don’t and dismantle, it becomes a broken jigsaw. We’ve seen really good things in this run of results that have gone against us but we have to react better. We have to deal with getting whacked in the face better. Don’t get offended by it, get better.”