United returned to winning ways in style on Tuesday evening as they surged into a two-goal lead and then controlled the tempo against Crawley. 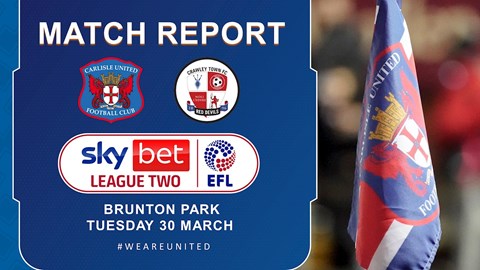 Manager Chris Beech spoke to us after full-time to give us his thoughts on the game.

“I thought we played some really good football and scored two great goals,” he said. “I asked the midfield, especially Joe Riley, to take an extra touch and be more composed.

“I thought he was excellent, he really marshalled that midfield, especially because we had a man down. Crawley started with a diamond, they must have watched us on Saturday and thought they’d match us, but we changed our shape from Saturday to start this game.

“I’m really pleased with the players, their efforts. They have to deal with a lot of things on and off the pitch but when they turn up and represent us like that, I’m very pleased.”

Having seen his players set the tempo of the 90 minutes, he added: “And the quality was there as well. We had some great football, great efforts, great crosses, some great chances.

“I think when we got in behind them, even the one the linesman flagged for offside, Ozzy’s saying he knew it was offside but he should have put the ball in the back of the net, the football was really good, so it was an excellent effort.”

There’s a saying in football that you can guarantee that if you don’t hit the target, you won’t score a goal, but was there perhaps an element of luck with Joe Riley’s second goal of the season when it spooned up off a divot and popped over the keeper’s head?

“He was definitely rewarded for hitting the target,” he told us. “I’ve been encouraging him to take the extra touch to get nearer goal. If you noticed in the second half, he did his curler, he had one touch and curled it.

“I’d prefer him to take the second touch after that because it sets up a different type of shot. He did that on the actual goal. Yeah, it’s fortunate, but if you don’t shoot you don’t score. He did hit it with a bit of power, it took a wicked bounce off the turf, I can’t deny that to the opposition goalkeeper. 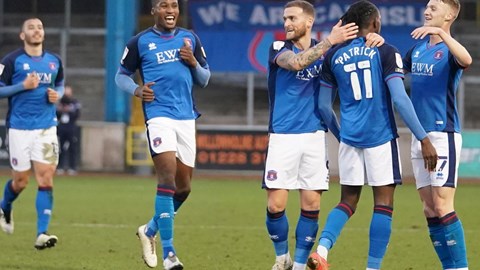 “I wouldn’t say he’s made a rick, he’s been unfortunate. But we definitely deserved to be 1-0 up at that point. Then there was Omari’s goal.

“Tactically Jack Armer had a free game tonight, Crawley didn’t really do anything about that in the first half. He was constantly out in front of me in front of the dugout, and his quality of crossing was very good.

“If anything, I told him, in his contract, it doesn’t say you’re not allowed to score. He can shoot stronger, better himself, he could have had a couple of goals, he had that much freedom within the shape Crawley were playing.

“But I have told the players there’s freedom within the structure and framework we have. But if you take a different choice, make sure it works, take responsibility. It’s very difficult as a manager sometimes because your planning and prep for games is always very good, but it’s unopposed.

“Then when it gets questioned and put on its back foot, it’s tested. We didn’t allow that, and the players have to take great credit for that. And Omari, I was telling him to pass it and then he went and did that.

“That’s the freedom I’m talking about. If you’re going to take responsibility, make it work for you and the team. He struck it really well and I’m pleased because he wants to score goals for us.”

“With the lead we had at half time I told the lads to stay calm, because we were in control," he added. "I asked them to stay on the same path and try to create more chances.

"I said to Ozzy, because he doesn’t half get pushed around, I know he gives out, but at the point of that I asked him to play on, not look to the ref to try and give him an advantage because the refs seem to be ignoring him.

“He did what I asked then got in on goal because of it, and it’s unfortunate he didn’t score. The goalkeeper makes two great saves off his header and the rebound, I don’t know how it hasn’t gone in, I really don’t.”

Also pleasing for the team as a defensive unit was the clean sheet.

“I’m pleased for Paul Farman, I think that was his tenth,” he said. “I’m really pleased for him. Again, even in his communication, I’ve talked to him, we can get to the same point but in a different way.

“But he’s a real honest lad, all of them are, I’m really pleased for them tonight.

“They’ve battled bit hopefully they’re injury free, because we’re heading to Southend at the weekend. They’ll get time to rest and recover before we train on Thursday and travel on Friday." 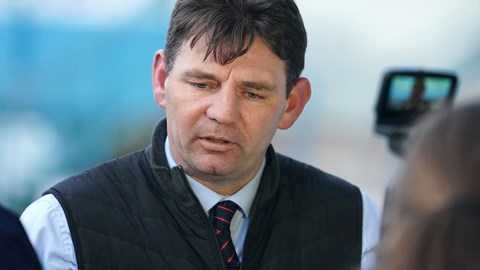 But, having said that, he still insisted that the manner of the victory could be even more comfortable.

"I'm pleased, but within that we can even make winning 2-0 easier," he told us. "At that point where Joe Riley and Callum Guy are driving forwards, Gime’s taking the shot, and they hit a diagonal ball over Aaron Hayden, they’re in on goal.

"We've seen that kind of thing happen and we want to avoid it. There are different things you can do to control winning easier.

"That’s what you get when you’re teaching players those skills within the skills when they’re playing so honestly, which is commendable. I think it’s something we’ve represented within defeats, which we have.

"They’re not doing the individual mistakes on purpose or what’s gone on. We have been in difficult circumstance. But to do it like that and play so well, I’m really pleased.

"And we played really well on Saturday, and we were rugged and dogged against Leyton. They’ve got their just rewards."