We caught up with United boss Chris Beech shortly after full-time on Tuesday to get his thoughts on the game. 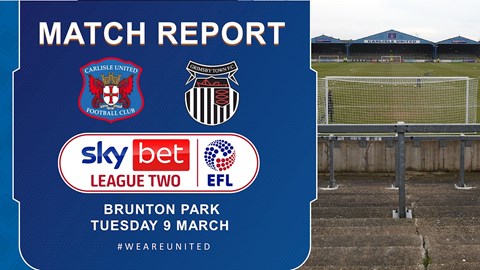 Speaking first about the importance of the late equaliser, he said: “I think it’s very important, because it represents a value to hard work and we get a point.

“And within that hard work, you could argue in or out it was worth more, but I’m really pleased that the lads got it with everything against them. We were up against the wind and the rain at a point where it would be easy to give up, but we didn’t.

“They kept pushing and going, got a couple of chances, the keeper saves a few, but we get free on one of them and Ozzy [Zanzala] does that instinctive thing he’s got, and he gets the goal.”

On the character needed to dig out a result like that, particularly at a time when results have been going against the team, he added: “We aren’t down and out, we’re fighting in everything we are, and I’m really pleased about that.

“Grimsby scored a great goal, they score from one of maybe two or three opportunities within the 90 minutes, so we’re not down and out, we’re fighting. We also scored a good goal and we asked questions of an opponent that are fighting for their lives to stay in the league.

“They’ve got a great manager and they tried their best to win that match, but we fought so hard to make sure they didn’t. We just couldn’t manage to get in front to make sure it was our three points.

“The lads have shown great character, and we all have, because we’ve been asked some right strange questions since the start of January. But that’s what we’ve got to do. It’s good that we have a squad that’s united and who want to represent us. 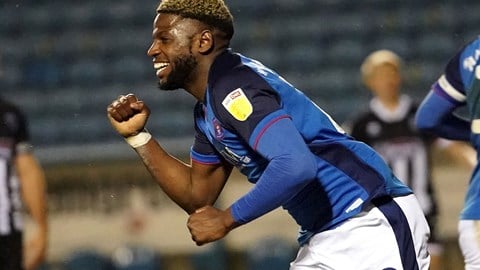 “It’s not great in terms of not winning enough games in the last three weeks. But we’ve done very well last season to make sure we’re good for this season, the recruitment in the summer, and to be fighting together, which can still be in with an outside chance of doing something we could argue we shouldn’t.

“But where we’ve been and where we’ve taken the club, people will only see that as I suppose failure, but it isn’t, there are different types of successes, and we’ve just got to keep fighting until maybe we can touch something.”

“This was a game where we didn’t get it all our own way but we never lost that fight,” he commented. “It was a hard-fought game, wasn’t it, and I was very disappointed to concede the goal.

“I don’t think Paul Farman had anything to do in terms of saves, but granted we didn’t work their keeper enough either. We started the game very well, we had many opportunities to get good crosses, some of them we took and others we didn’t.

“Taylor Charters put a great ball in after four or five minutes and Omari Patrick should attack it with more vigour. If he does I think he scores. We had a few cross-shots that we should have capitalised on but what we weren’t doing was reading the miscue of a Grimsby defender.

“There were a few moments like that, but I was very pleased with the competitive spirit shown by the players, because it’s very difficult in situations that can happen. We’re in a situation that will feel difficult to the players, it really will, but to go against the wind and the rain and get something showed great character.

“We spent much of the second half in Grimsby’s half, we asked a lot of questions, and the save off Brennan’s header was unreal. He attacked that well but unfortunately it came back to him too quickly and it went over the bar.

“In my opinion the lads deserve great credit to keep going the way they did, but people will probably criticise that because obviously it’s against a team that aren’t higher in the league. As I said pre-match, there’s no significant difference in this division between teams.

“I’m just pleased we got going and that Ozzy Zanzala got off the mark. I’m pleased for him and everybody at the club that we got something out of the game.”

And could that late equaliser be the spark that brings the return of that three-point feeling?

“Of course, I still want to be talking about us doing well,” he told us. “We compete as best we can. From my perspective, leading five games without winning is a strange place to be.

“Within that we have to remember that we had that long lay-off, and that’s something I wish hadn’t happened. It’s like all of the players have been injured and it’s hard to come back into Saturday-Tuesday games.

“It can catch up with you, and we’ve seen that when we’ve been leading a lot of games without being able to see them off. For me personally, that’s hard to live with.

“Rod McDonald should possibly be tighter for the header they score, but he keeps going until the end and ends up setting up the goal, and those are the traits and characteristics you want to see in your players. They’re fighting characteristics.”

And speaking more about the frustration felt by the fans, with their team having been top of the pile just a few short weeks ago, he said: “If I say and go into detail about why it’s been difficult these past few weeks I’m just a man full of excuses, but I am not.

“I think what we’ve faced will never really be appreciated because somebody always wants something else. It’s easy in hindsight and easy to call on. It’s much harder to make a difference within the time, the only time you can do that as a player is while the game is on, not before or at half-time, or after, not during the chats.

“I respect the fans and their opinions. If I see hard work, players giving their all, fighting to the end, it’s amazing how a point sometimes feel better than a victory. They go against everything, they don’t get it easy, we don’t stay in the best hotels, have the best travel or training facility. We have it hard.

“But we do our best within what we’ve got and all the staff on and off the pitch support each other, which is commendable for the club to do that. We have to keep working very hard.

“Am I going to apologise for going top of the league, no. Am I going apologise for us trying to come out of this period with what’s been chucked at us, no. Are we accepting the results in terms of points value that should we worth more - do I want more, of course I do.

“To be leading in many of those games, it’s disappointing we haven’t got more, irrelevant of the factors that have put us in that position to play in those games in difficult circumstance.

“If we achieve anything it’ll be done the hard way. But there are no guarantees. There is a lot of learning going on, every day you learn something.

“What I do know is that without hard work, honest values and the capability to go against all odds, if you haven’t got those traits as a Carlisle United manager, you’re cream crackered.”