In a season where you think you’ve seen everything the footballing gods can throw at you, United had another unusual circumstance to face on Tuesday night as news came through that a horrible crash had closed the M62, with tailbacks of over 15 miles reported. 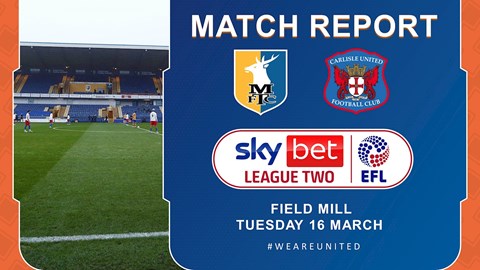 MATCH REPORT: From the Mansfield away game

Thoughts, of course, immediately turn to those involved in the incident, but the practicalities of a match night are still to be met, with an enforced change of referee one of the consequences of the incident as Michael Salisbury reported in that he was unable to find a way through the stationary traffic.

And as it became apparent that members of United’s first team had been caught up, an exchange of calls with the EFL led to a slipping of the kick-off timing by 30 minutes, to give the players the chance to negotiate their way through the tricky situation.

“These things happen,” manager Chris Beech said. “There was an air ambulance needed, it was a massive crash, and obviously the most important thing was that all of that was dealt with.

“I was heading towards it myself and I’m finding every rat route I could remember from when I played for Huddersfield to get here. It’s unbelievable how this season is throwing up little things that have made it more difficult to feel more relaxed before a game starts.

“Yesterday our goalkeeper isn’t available at 12:30, some of the squad aren’t available to get here on time because of major incidents on the motorway, so you find that you’re waiting at a time when you would otherwise be preparing.”

The 30-minute delay proved to be adequate, and it became another game where the Blues defended well and took the lead as both teams competed hard for the points.

“As we’ve said before when you lead in a game you want to go on and win it,” he told us. “We scored a good goal, got the upper hand on several occasions, we had good chances in the first 15 minutes or so of both halves, but of course when you’re leading you’re always disappointed if you don’t see it through.

“What we have to remember is that oppositions aren’t just going to lie down. In this case, they’re at home with nothing to lose. I think they beat Cheltenham and Morecambe here and they’ve got some really good players.

“They invest heavily to try and do good things. It wasn’t too long ago when their manager left a League One situation to come here, so they’re obviously supporting that. They aren’t just going to let other teams take what they want.

“Our players worked really hard to get in a position of strength and, without looking for this as an excuse, referees, free-kicks and decisions, it’s hard to take sometimes.”

Having started strongly, it was the visitors who created the early chances without quite managing to find the back of the net.

“There were some good moments,” he agreed. “Jon Mellish flashed it across goal and Rhys Bennett – he has to score. He’s chested it, he could have headed it, he’s done everything I’ve asked them to do, we often head things when we could chest it, and he’s in a perfect position.

“He missed that one, Lewi Alessandra did similar on Saturday, but the best thing about that one was that we scored off the corner. Today we started the game great but didn’t get the goal.”

Explaining the change of shape employed shortly after kick-off, he told us: “We were competing and playing well, but what we did after 20-25 minutes, they played a diamond and had an extra man in midfield.

“We either ignore that and try and score, but let them have more ball, or you tend to think we’re away, so we decided to arm-lock it and see who gets the better. Jack Armer was getting out and getting crosses in, so it was kind of working.

“What we did in the first half, we serviced Mansfield just through our throw-ins and lack of distance in clearance. It reinvigorated strikers who could play near our box. First half of the second half the lads went a bit more direct, but it helped us get behind and runners off midfield, hence the goal.

“It’s getting the balance. But to lose the lead to that free-kick, which really wasn’t one at all, it just wasn’t, is disheartening. That’s gone against us and it’s so frustrating.”

“It was a game that became fast and furious and we talked at half time about being cleaner in our work,” he added. “We did that, and the goal had good elements in it. We had players who were prepared to drive and players willing to show energy to get in the box.

“The finish was very good, and from that position we should win. Unfortunately Magnus got a couple of whacks, which he got nothing for, and then when one spilled loose the referee supported the attackers at that point.

“Our players were getting kicked and getting nothing, but there you go. We have to deal with it and we have to continue to work hard, that’s all we can do.”

Always a topic for discussion for those watching the game is the use of substitutes, with managers hailed as the hero or the villain depending on what he does and which way the game subsequently goes.

“It’s hindsight, and that suggests I’ve got it all wrong tonight because I didn’t swap, and we’ve not won,” he said. “You can swap and then lose the game. It was so tight, the pitch isn’t right, it’s not a dribbler’s pitch, I just wanted one moment from a bit of speed over the top

“It was so tight, I was challenging my full backs to be stronger, they stepped up after we scored, they’re getting better. That’s my job, Gav’s, the staff’s.

“When you’re wanting and trying to do something that supports three points, that’s what you do, and after an event everybody gets the question right.

“It’s about opinion, but if you’re ahead in a game and there’s a feeling that the shape is right, in terms of making change or seeing out the game, when you look at all the other games we’ve been in front, it’s very difficult because you’re winning at that point, to make the change.

“If you knew they would equalise like that, I would have changed it 20 minutes earlier. But I thought we were going to get there, and I thought the players were working hard to make that the case.”

With an update on JJ Kayode, he commented: “I was hopeful he’d be back for Saturday, but we have to wait and see.

“It’s a bad tackle from the lad who got sent off the following week. We’re just not getting that bit of help when we should be, but it’ll come if we keep doing the right things.”