United boss Chris Beech is refusing to use the prolonged and frustrating lay-off through January as an excuse for the current run of results, and he confirmed once again today that the physical data stats are showing that the players are competing at high levels, having worked hard to overcome what were a difficult set of circumstances.

“I won’t share the detail of the details, but I will share that the sprinting statistics are getting back to where we were,” he told us. “There are still other factors within that. It’s like any day at work – when you’ve not got what you want but you’ve worked hard, physically it feels a lot harder, and you’ve probably done physically less.

“We need to make sure we stay in front of that psychological line of being able to dominate and lead, because we’re doing that well in most games only to not then see it through. What we haven’t been too clever at, in the last two games especially, is taking control of the last 15 minutes of a game.

“We’re relinquishing total control from a great position of strength. Anybody that does that in any walk of life will struggle to get what they want, no matter how much of what they’ve been doing to that point has been on their terms.

“We have to make sure we do the last 10 metres of a 100 metre race, we have to start dipping earlier for the line and finish strong.”

“As to whether we go on to achieve that by dealing with things better mentally, tactically, all of these factors are relevant but they change on each individual aspect,” he explained. “It depends on what’s happening on that day with that opponent, if you get the second goal, if you control and play the game within the game.

“A lot of teams do that, we need to get better at that, we’re a little bit naïve. It may be a bit more individual leadership. It could often be a strong challenge or header to reset the tone for 10 minutes.

“It’s all different factors that are relevant, but irrelevant because it’s different for the answer on a different day. They’re all important factors to seeing out things and we have to better at recognising what’s needed at each different potential turning point within the game we’re playing.”

On what’s needed to turn the run around, he said: “Not a lot. It’s so little but it’ll mean so much when we do it.

“If you look at us in great detail, there’s not too much different right now other than probably feeling a bit agitated and aggrieved at the situations we were put in. I’m not a psychologist, but I have to make sure the players understand there wasn’t too much we could do about that.

“There is everything we can do about everything while the game’s going on, so we have to try and take care of business. The details of losing games from winning positions, which makes it more difficult to lose a game if we’re being honest, because we have a great control against some very good opponents.

“We 100 per cent need to stop giving penalties away. We’ve conceded 4 in 7 games, that’s over 50 per cent, and that’s not going to help you win. It would be nice if we get awarded one to be able to take one, that was a key moment on Tuesday and last Saturday in terms of penalties against us.

“It’s happened, and if I keep going on about that it’s just generally classed as an excuse. But they are massive key reasons why things change. Goals change games, but that’s what we have to do, stick to what we’re good at. We have to constantly understand our opponent, and what they might do, and make it very competitive.

“We have 18 games left, and I see ourselves fighting for each game we attack. That’s what we’ve done from the start of the season. There was never a set precedent to win a league or to finish bottom.

“What we wanted was to change a culture at the football club, to encourage all the young players and the experienced players we’ve got to bring them together, integrate youth system into the first team, reinvigorate and excite people.

“We’ve done that, what we have to do is try and get value for that now. It would be lovely to be involved but all I’m concentrating on is Morecambe’s strengths and making sure we’re ready for Saturday.” 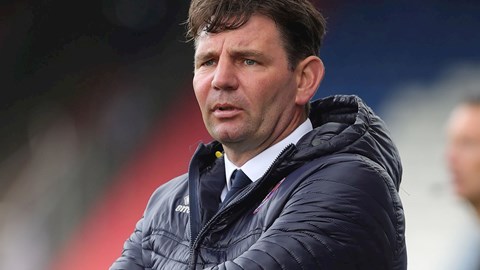 MANAGER: Right behind what we're trying to achieve

With any tough period in any walk of life, it’s when a deep breath is needed as a way through the adversity is sought.

“The easy thing to say is that you do see people differently at times like these, but I think it’s human nature when you’re not getting what you want to act in a different way,” he said. “People don’t change, it’s like anything.

“On a job interview you would have brushed your hair and put a tie on, but you might not do that 25 years later to speak to the same bloke. We all hide our deficiencies and in time they can come out to be open.

“Yes, we will learn from different things that are thrown at us, but the answer to that question can be completely different to the same incident in football in three or four weeks time.

“As we’ve already asked, how do you see off the last 15 minutes when you’re strong? That can be many different things. The other day, it’s definitely scoring that penalty or getting the second goal.

“I think Colchester would have psychologically dived. But instead because of their penalty awarded they have an extra 25 per cent in every physical output from that moment. It would have gone the other way, but that’s ifs, buts and maybes.”

“There’s no question it’s difficult, because if you turn up to try and do something 10 times and can’t, it is hard,” he concluded. “You prepare for all those opportunities but that’s gone, that’s the past, in my opinion it’s to look at when the season’s completed, to look at more detail of that.

“At the moment, we’ve got to concentrate on what’s next and that’s Morecambe. We’re looking forward to playing a very good opponent who have done amazing, and I love their honesty, and the way they play, and I enjoy going against people I have a lot of respect for in Derek, John and Morecambe’s staff.”