Time is, without doubt, flying by as the fixture schedule motors on and United go again tonight as they head to Mansfield for another tough encounter. 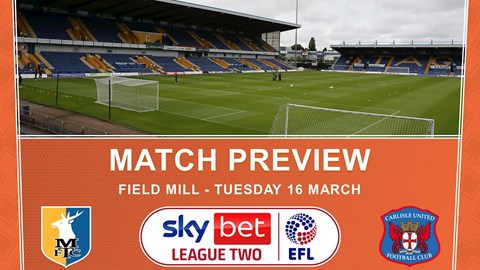 Speaking ahead of the game, manager Chris Beech said: “It’s definitely one we’re looking forward to.

“They have a great manager in Nigel Clough. I respect him so much. When you watch his interviews I think he’s absolutely superb.

“You can’t get more of a footballing man than the son of Brian, to play Premier League football and manage like he has. He’s a good man and he’ll be looking to get them going as quickly as possible.”

“It’ll be a different type of game where they’ll really be at it, so we’ll have to be at it as well. The good thing is that our fitness stats are still going the right way.

“In terms of running, we’re still short of where we were when we could repeat and perform pre-Covid. We were better for Grimsby, and better again for Bradford.

“Hopefully we can step on and be consistent to the technical output and levels we want to achieve.”

And could this be a game that sees the return of JJ Kayode from his I jury lay-off?

“Hopefully, but we’ll see,” he replied. “He was in the dressing room congratulating everybody after the game on Saturday and he’s constantly doing his rehab. We’ll see how he is and take it from there.”