Midfielder Callum Guy stepped up as team captain for a run of three games earlier this month at a point where the fixture schedule was really kicking into its relentless Saturday-Tuesday routine. 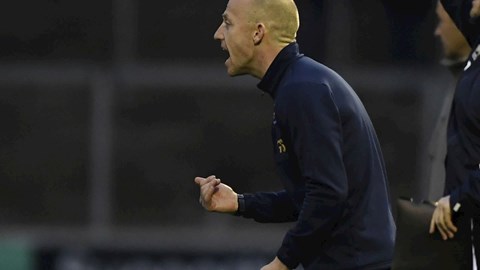 INTERVIEW: There's a determination in the group

A victory against Bradford accompanied his first wearing of the armband, but the results have otherwise been frustrating as the group looks to hit he heights they reached when they bullied their way to the top of the table at the turn of the year.

We caught up with him this week to talk about the mood in the dressing room as the hard work continues in a bid to rediscover the consistency which had been such a big feature throughout the first half of the campaign.

“It’s obviously frustrating with the results we’ve had after Christmas,” he said. “We had the run-up to Christmas, then we had the break, and since then we haven’t really got it back to how we were.

“We’re just as frustrated as everyone else, but we’ve still got 12 games to turn it around and hopefully we can do that. When you think back to how things were going for us it makes it hard to take.

“It’s not like we can put it down to one thing. We just have to try and take as many positives as we can. We’ve been leading a lot in those games where we haven’t got the points, but we just haven’t seen it out.

“Hopefully in the last 12 games we can put it right and get back to how our form was. It’s the same people, as well as a few additions in January. We know what we can do and what we’re capable of because we’ve shown it.

“Hopefully we can go back to those traits – the high pressing, high intensity and stuff like that. We’ve showed it in glimpses recently, but not for long enough.”

With any sticky patch there can naturally be a feeling of anxiety, but the combative midfielder insisted that wasn’t the case.

“Definitely not,” he told us. “It can dent your confidence, but we all believe in each other. We’re still a tight-knit group, no-one’s starting to be toxic or anything, it’s still a good dressing room and we know it’s only down to us to turn things around. MANAGER: Everyone is committed to what we're trying to achieve

“Within that we’re demanding more of each other. Words of encouragement are necessary but also you have to tell people when they’re not doing the right things in a positive way.

“That’s what we’re doing. It’s important that there’s 11 leaders out there on the pitch on Saturdays and Tuesdays, because we all have to take responsibility.

“In terms of nastiness, you need it. Sometimes you need that kick up the backside. But, again, it has to done in a positive way – you don’t want to start arguments and falling out in the dressing room. It’s been a really good group to be around, three’s still good positivity around the changing room but we all know we need to change almost getting there to winning.”

And some challenges can also cause people to take a step back, as confidence perhaps takes a dent.

“No-one else can change it for us. We do our training stuff, the gaffer picks the team, but when it comes to 3pm on Saturday it’s the 11 players on the pitch and the people coming off the bench who need to turn things around.

“It’s not about changing stuff – it’s about doing what we were doing that took us to the top of the league. We know that if we play that way we can beat anyone.

“Of course it’s a really big learning curve. Every team will go through these things and every player will go through something throughout their career. To have this, how you try and get out of it is massive to the way your future’s going to pan out.

“If you come out of it fighting you have every chance of having a really good career. Right now, it wasn’t years and years ago that we were playing at our best, it was just before Christmas. We know what we’re all capable of.

“But it’s not like we’re losing 3 or 4-0 every week. We’re still in most of the games, we’ve been leading in quite a few, so there are positives there. It’s like Tuesday, we looked the more likely but it was a sucker punch to concede so late on.”

And with a group of players who, for many, are new to the challenges of playing regular football, he commented: “This is where the experienced players have to do their bit because quite a few of the lads haven’t played a full season, so it’s important to keep encouraging them and make sure they’re looking after themselves as well.

“I think we’re all feeling really good, we’re going to the last minute and there’s not much fatigue. We’re training well, the gaffer’s making sure we do the right things but that we aren’t overdoing it. We’re eating and recovering properly, because anyone in this squad can be picked to start and everyone needs to be ready and sharp.

“We aren’t in a horrendous position, we’re still in with a chance of reaching the play-offs, and that’s why we go into every game doing everything we can to win it.

“The manager picks the team and puts his trust in us to perform to our best. He has a lot of trust in all of us and he’s happy to play whoever he thinks will do the job, because he knows what we’re capable of. It’s important we get back to our best as quickly as possible.”

But have the enforced lay-off and problems with Covid got into the minds of the players in any way at all?

“It plays a part,” he conceded. “We went through a spell where we couldn’t train, for a number of reasons, and I think over 50% of the squad had it, even though I didn’t, but I think, being honest, we’re all over that now.

“We need to just focus on the games ahead and get back to winning ways. Covid certainly isn’t something we talk about. It was obviously tough to go through, we didn’t play games for so long and now we’re having to play Saturday-Tuesday for the rest of the season.

“But we have to deal with, it really is as simple as that. It’s like not being able to have fans. It’s really tough, particularly with us having had a spell where we did have them in the ground.

“Having them there gave us that extra 10-15% but it’s not something we can use as an excuse. We’ve been without fans for most of the season, so you do get used to it, but we’d still prefer them to be with us and cheering us on.”

“It was a win against Bradford as well, but since then we’ve gone back to losing a couple, and hopefully we can change that on Saturday. It’s a nice thing to have the armband and lead the team on the pitch but you have to show in performances that you can be a leader as well.”

Next up for the Blues is the visit of Cambridge on Saturday.

“This is a big one for us because we feel we owe them one for what they did to us earlier in the season,” he said. “We know it’s going to be a tough game, they’re up at the top so we know we have to be at our best to get something from this game.

“To do that we know we need to get back to what we’re really good at. We’re a high pressing team with high attacking energy.

“We don’t want anyone to come here and feel like they can just roll us over. We’re a fighting team and we’re keep going to the very end. When we played them earlier in the season they had three shots on target and scored from them, and we had chances ourselves that we didn’t take.

“It was after that game that we started to get our football going, and it’s time for us to do that again now. We know we’re conceding too many at the moment, and that we’re missing the chances we create. We’ll keep working hard and it will come again.”