Monday afternoon brought the good news for three of our second-year scholars that they had secured their first professional deals, but with the expected caveat that the hard work starts now. 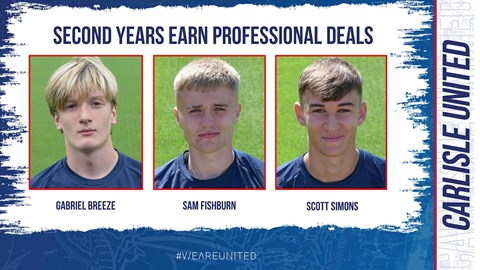 We spoke to under-18s boss Mark Birch about the three lads as they prepare to enter a brand-new environment.

“It’s great for these lads, and all of them have come in and done really well through their first year with the under-18 group,” he said. “Sam Fishburn joined us from grassroots football and he hit the ground running.

“He didn’t score in his first five or six games, but once he did start finding the net he ended up becoming the top scorer in the league.

“Credit to him, even though he knows he’s still got a long way to go to reach his full potential. He’s got a great work ethic, and he’s a good lad, and hopefully we’ll see him kick on this season.”

“Gabe [Breeze] didn’t play much in the first part of the season for the youth team, but when he had the chance to train with the first team he took the opportunity with both hands,” he added.

“He caught the eye of the staff with that and he gave some good performances in the reserve team off the back of it. He was probably our man-of-the-match in the cup final at St George’s Park, and he’s reached a good level.

“The key for him is to now produce more of the kind of work which will allow him to kick on again.”

“Scott [Simons] played the majority of the second half of the season with the youth team, and his performance levels were high,” he commented. “He takes a lot of credit for that, and he showed that he has the attributes to give himself a chance.

“He’s a confident character and he really wants to show what he can do in that higher level environment.”

As for what comes next, now that the ink is dry, he said: “For all three of them it’s about taking that next step and getting themselves around the first team regularly.

“The hardest step to make is gaining the trust of the manager, but if they get their heads down and work hard they’ll get their opportunity. It’s up to them to grasp the chance they’ve been given.

“Getting young boys through like this is good for the club, it’s good for the area, and it’s nice for the coaches who work in the academy to see this happen. Everybody has played their part at some point.

“Scott has been in the academy from a really young age and we all enjoy seeing these young lads develop and progress. Gabe came in a little bit later, and Sam joined us further down the line, but we can look at so many of the lads who have come through recently who were with us from when they were very young boys.”

“What we’re looking for now is for some of these lads to make that next step and claim a regular starting shirt,” he confirmed. “They’ve done fantastically well to get where they are now but, and as I’ve already said, making that transition to regular first team football is the hardest thing to do in this industry.

“It’s not just about getting 10 or 15 minutes in a game, it’s about starting and influencing the three points we’re all after.”

Manager Chris Beech mentioned at the weekend that the three scholars could now expect to spend a lot of time with the first team squad, particularly for the daily training sessions. “Within our club the most important thing is the first team,” the youth team gaffer insisted. “If you were to ask the young players where they want to be, it’s with the senior squad.

“We’d love to have them training with us on a daily basis, but their careers come before what we need.

“It’s over to them to do the work that means they stay there. If they do come back to us they have to conduct themselves properly, play well and keep the standards high. We want the players to be with the manager as much as they possibly can be.

“With them being young lads they can get carried away with the situation, they get excited with it, but it’s our job as coaches to make sure they do keep their feet on the ground.

“They may need a little reminder every now and then that they haven’t quite made it yet, they’re still at a very early stage of their careers, but at the moment they deserve all of the credit for what they’ve achieved so far.

“We’ll continue to help them as much as we can because we want to see them push on.”