The Supporter Liaison Officer [SLO] role at Carlisle United is taking another significant step forward for the 2021/22 season with former-CUSG chairperson Simon Clarkson appointed by the supporters’ groups to lead a new-look team. 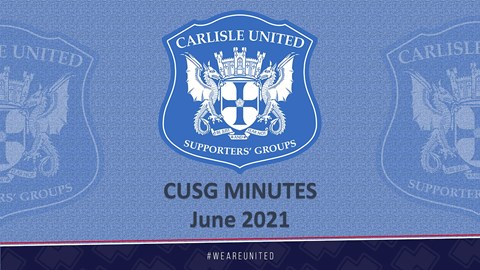 Taking on the newly created position of lead SLO, Simon will head up a team consisting of the existing ‘meters and greeters’ (headed up by Geoff Weston, who had previously filled the SLO role since the summer of 2019) which will be complemented by Matt Bond as a new assistant SLO, and Keith Elliott, who will act as our away day SLO.

Senior SLO Simon Clarkson said: “This is a new challenge that I’m very much looking forward to. The key for me before taking the position was to confirm that it is an independent role – something that is for the fans and driven by the fans.

“That is most definitely the case, and I hope to be able to bring a very positive and proactive approach, importantly on match days for home and away fans, but equally importantly whenever fans feel they need to raise a query or concern, and on whatever subject that may be about.

“Geoff [Weston] has been fantastic over the course of the past two years and he will stay on the team, leading the match day ‘meeter and greeter’ contingent, and they will be very visible around the stadium both as fans arrive and as they make their way into the ground.

“Matt [Bond] is keen to lead on the catering side of the operation, and he will take a place on the newly-formed Catering Panel, as well as assist with other SLO duties.

“Keith [Elliott] is part of CUSG’s away travel group and he attends the vast majority of away games. He will provide a very useful port of call for our travelling fans, should any issues arise when we head off to other stadiums.

“We are also very keen to add more people to the SLO team, so if you feel you can add to what we’re doing please do get in touch via the contact details below.”

Chief executive Nigel Clibbens said: “This is a big, positive development as far as we are concerned. The important thing for fans to note is that the SLO team, headed by Simon, is completely independent of the club. The scope of the role was set by CUSG and is published on the web site [read the SLO job specification HERE].

“It has to be that way if the position is to be credible, and I know that Simon will raise queries and push forward any issues that are raised by the supporters, whatever those issues may be. That’s exactly how it should be.

“By expanding the team the SLO function will become much more visible, and we think fans will very quickly gain confidence in what it can provide on their behalf.

“Having home and away SLO coverage is a huge step forward, and it is extremely encouraging to see that a match day ‘meet and greet’ service will remain in place, with Geoff a key part of that provision.

“This is a really positive development, and we wish Simon well as we look forward to working closely with him and his team as we go forward from here.”

We'll be meeting the new members of the SLO team via a series of mini-articles to appear on the official website in the coming weeks.